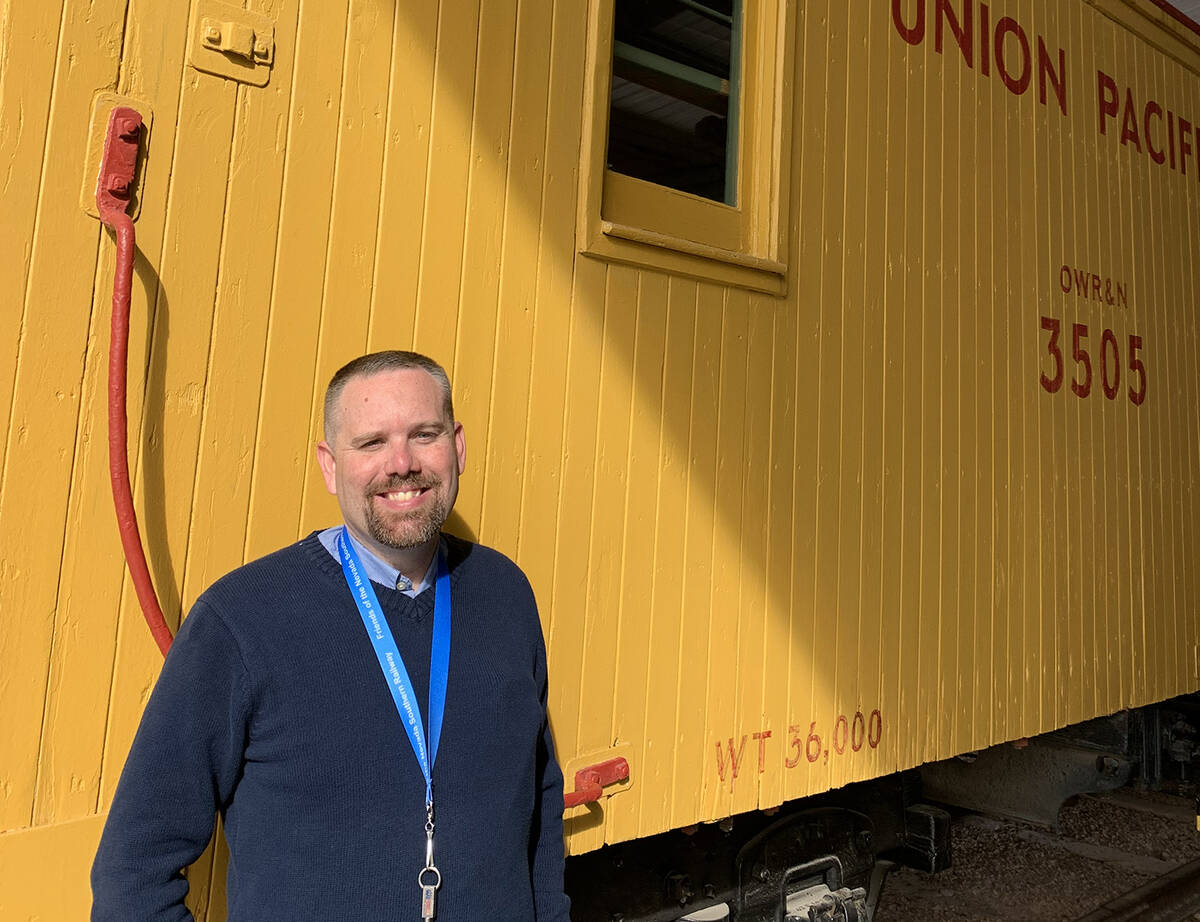 (Hali Bernstein Saylor/Boulder City Review) Christopher MacMahon has turned his childhood love of trains and passion for history into a career. He began his new position as director of the Nevada State Railway Museum in Boulder City on Jan. 3.

Fortunately, his fascination with railroading didn’t wane as he grew up and will serve him well in his new role as director of the Nevada State Railway Museum in Boulder City. His first day on the job was Jan. 3.

That love of trains, combined with his passion for history, will help as he works to tell the story of the railroad and how it impacted the construction of Hoover Dam and Boulder City, he said.

MacMahon, 35, began his affiliation with train museums when he was just 10, volunteering at the state railway museum in Carson City.

Because he was so young, his duties consisted mostly of polishing brass and dusting, but it gave “me an entry place to what museums do.”

As he grew older, he became a docent and worked with educational applications, including creating temporary exhibits and helping with steam train operations.

He said his mission today continues to be educating people about the museum, trains and their impact on the state’s rural areas.

Education is big with his family, he said. His brother is a high school math teacher and one of his sisters teaches high school English. His youngest sister helps victims of domestic violence and his parents are retired accountants.

MacMahon himself holds a doctorate in history. He has worked as an education curator with museums in Las Cruces, New Mexico, and as an adjunct professor of history in California.

He also has served on the board of directors with the Friends of the Nevada State Railway Museum in Carson City and Goleta Valley Historical Society in California.

He said one of the things he hopes to do in his new position is bridge the educational and generational gap between older and younger people who visit the museum.

MacMahon said he has seen that younger people learn so much through interactive displays.

“Until they swing that maul and try to hit a nail on the head they don’t understand how difficult it was to build the intercontinental railroad,” he said.

At the museum in Boulder City, not only can people hear and learn about what it was like to travel across the country by train, but they can also experience it. During their ride on the Nevada Southern Railway they can learn about how big a project it was to build the Hoover Dam and about its impact on the area.

MacMahon said he already has one hands-on lesson at the museum: the railroad post office housed in one of the museum’s cars. People can experience what it was like to prepare mail for delivery.

Once in the car, they are given 20 minutes — the time it would take to get from one station to another — to sort, prioritize and get the mail bag ready for the next stop, he said.

“They get a better understanding of the process,” he said, noting that in its heyday the railroad postal service was a “model of government operations.”

The hands-on lesson also puts the human element into activities, such as sorting the mail, that make society operational, he said.

Unfortunately, it’s temporarily on hold because of COVID-19.

Adding more experiences like the mail car is just one thing MacMahon said he is looking forward to in his new role. He said he’s also excited about the plans for expansion and the new visitor center.

“There’s lots to be positive about,” MacMahon said.

While they work to get the necessary funding to build the visitor center, progress is being made finalizing the design. He said he hopes the design phase will be completed by the summer of 2023. Then they will be “shovel ready” for when all the funds are obtained.

“It will be a beautiful building — a great asset to the community,” he said, noting how nearby businesses will benefit from the tourism it creates.

When not working, MacMahon said he enjoys being outdoors and exploring state and national parks. He said he likes to take road trips when he can.

“I’m a big outdoors person. I love hiking, fishing and being outdoors,” he said. “There’s so much to see and explore — so much beauty.”

When he’s limited on time and opportunity, he reads. “I’m a big reader,” he said.

As a former museum volunteer, MacMahon said he is very appreciative of the Friends of Nevada Southern Railway and the work the group does. He is one of three full-time staff members employed by the state and there is no way the museum or excursion trains could operate without help.

“We need the Friends for our day-to-day operations. I can’t provide enough kind words about the help they provide.”