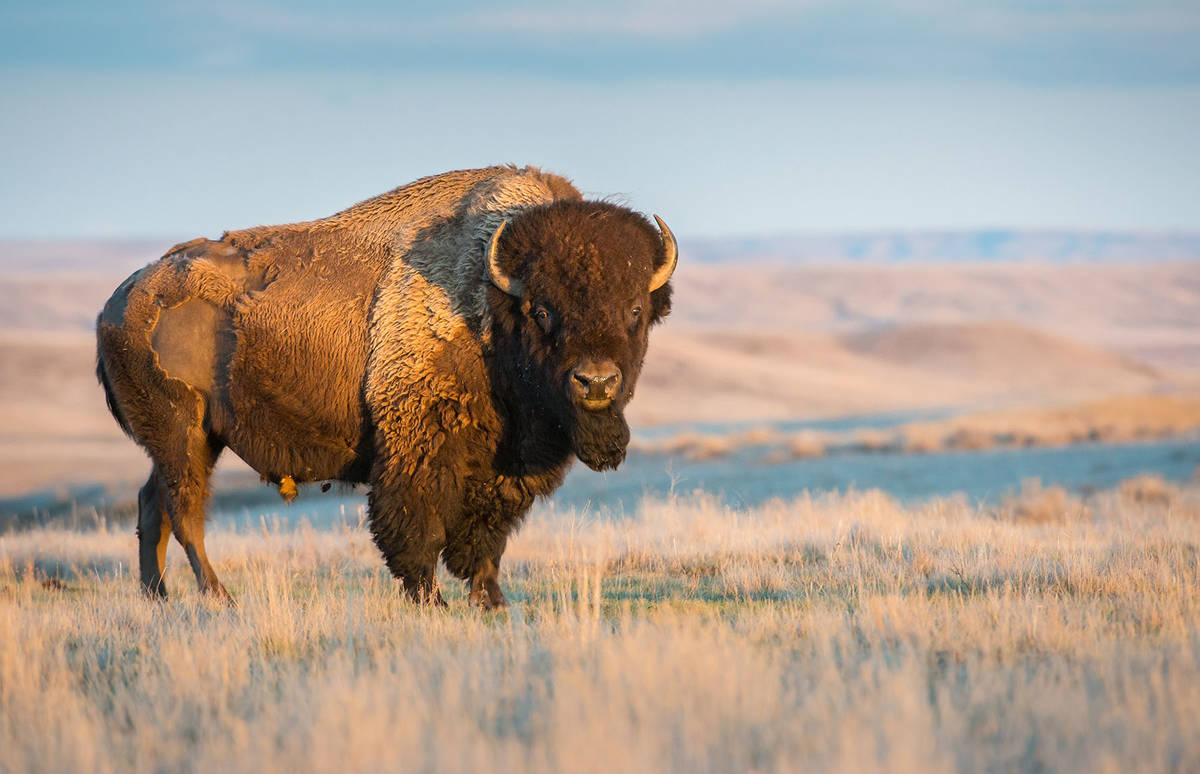 Historians say, originally, the bison ranged from the Alleghenies to the Rockies, but did come farther west into Oregon and Nevada, and from Great Slave Lake in Canada, southward nearly to central Mexico.

By 1800, the species had been practically wiped out east of the Mississippi and, by the middle of the century, the buffalo were restricted to the Great Plains where they continued to roam by the millions until 1869, when historians note, “the completion of the Union Pacific Railway divided them into a ‘northern herd’ and a ‘southern herd,’ and initiated the end of the race.”

But long before, they had once roamed over vast stretches of the lands that would one day be the United States. Spanish explorers in the Southwest saw bison occasionally, as did later Spanish settlers and called them “wild cattle.”

Famed American author James Fenimore Cooper wrote about the buffalo in his 1827 novel “The Prairie,” although he romanticized them to some degree. Cooper wrote of the bison as being a “noble and powerful creature … of wonderful strength and courage.”

In truth though, the shaggy beasts and their massive build, the largest land animal in North America, strong and powerful, are really not very good at self-defense. Their slow movements, except in a stampede (up to 35 mph), and poor eyesight made the buffalo an easy prey for the Indian tribes that followed their migrations.

The Oscar-winning movie “Dances with Wolves,” in large part, deals with the buffalo.

At one time, the buffalo even extended into the woodlands of eastern North America in the 1600s. Far larger numbers were found on the grassy plains of the Midwest and western Plains.

But that doesn’t mean they didn’t also roam into the valleys of the Southwest, Nevada included. A buffalo skull was discovered a number of years ago at Cathedral Gorge State Park near Panaca in Lincoln County. It was determined by scientists to be at least 800 years old and is an interesting story in and of itself.

For many years the skull has been on display at the Cathedral Gorge Visitors Center. That was proof that buffalo did roam, at least in parts of Nevada. Just how widespread into other parts may not be known, but one cannot say the buffalo were not here, unless it be on some mountain top.

During the 17th and 18th centuries, historians note the Plains Indians acquired the horse, a leftover from European explorers, and learned to be formidable warriors and hunters on horseback. Following the buffalo herds was essential for many of life’s necessities. Again, recall “Dances with Wolves.”

From the dried meat they had a nearly inexhaustible food supply. Hides were used for tents, clothing and bedding. Sinews were stripped for sewing threads, tools were fashioned from bones and fuel came from the droppings (buffalo dung/chips).

As gold seekers moved across the Plains in 1849 and the pioneers of the Western migrations followed, the buffalo herds, some numbering nearly 500,000 in a single herd, known to cover areas up to 50 miles square, began to be heavily exploited. Tanneries in the East had learned, possibly from early explorers, that buffalo leather was excellent for making shoes, belts, harnesses, tack and other needed items.

Then the buffalo hunters, with their high-powered .50-caliber long-range rifles went to work. In two years alone, between 1872-1874, more than 125 million hides were shipped to Eastern markets.

William Cody, better known as Buffalo Bill, is on record as having killed 4,280 buffalo in 17 months. “And proud of it,” he claimed.

When the railroads began to cross America more and more, some companies organized shooting excursions where the clients would shoot the animal from the train windows.

Hunters slaughtered bison across the Great Plains by the thousands, slicing the population from 30 million to under 900 total by 1890, (as noted by the American Bison Society). Because they became so scarce and extinction seemed imminent, President Theodore Roosevelt, William Hornaday and a few others formed the American Bison Society in 1905 to ensure the species’ survival. Today’s population has rebounded to about 530,000 on private and public lands in North America.

By the 1880s, the Plains and other Western states, had been opened for settlement and the beginning of America’s huge cattle industry was at hand. The need for buffalo began to subside.

So, if you do sing the song, “Give me a home where the buffalo roam … ,” and we all have, unless you live high in the mountains, there just might have been a time, long, long ago, when a shaggy, dusty buffalo may have grazed a bit in what is now your backyard.

(Adapted from a story by Harold’s Club, 1951, and the Nevada Historical Society)