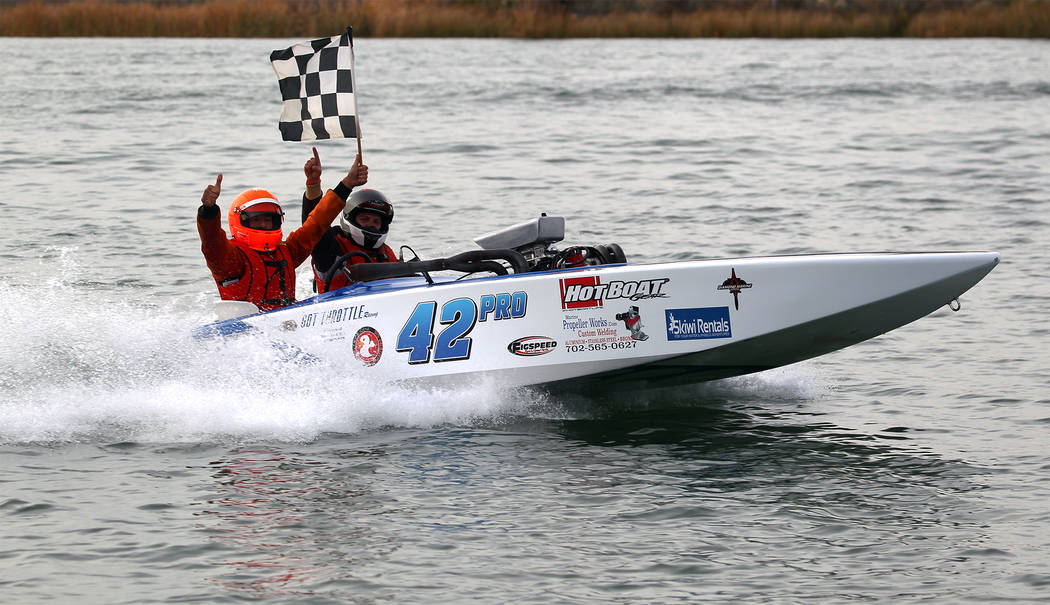 A Boulder City business owner has something more to celebrate this holiday season, winning one of the biggest boat races of the year.

Jeff Willoby, owner of Diamond Marine Service and Gotbox Racing, and his team placed first in the crackerbox division of the 73rd annual Thanksgiving Regatta held the weekend of Nov. 30 in Parker, Arizona.

The race is hosted by Southern California Speedboat Club and the Crackerbox Racing Association. It consists of four laps around a course that is 1¼ miles long.

In the crackerbox division, each boat is approximately 15 feet long and has a 700-horsepower engine. During the race, one person drives the boat and another rides as a passenger.

Willoby said they reach speeds of 110 miles per hour.

Matt Bookey drives his boat, P42 Penalty Box, and Willoby’s stepson, Richard Kendall, is the passenger. Willoby’s dad works on the engines, and his wife and other children help behind the scenes with the team.

“Our family has been boat racing since I was born. … “It’s just something we’ve always done,” he said. “I enjoy building something and then making it go.”

Despite being involved in this racing class since 2004, it wasn’t until four years ago that Willoby bought his own boat and decided “to do his own thing as a team.” They usually compete in six races a year.

He said for the past several years his team has had “bad luck” and something would break during or right before a big race.

“This last weekend everything just came together and worked out,” he said.

After this victory, he and his team have their sights on the APR Long Beach Spring Nationals being held Aug. 1 and 2 in Long Beach, California. It is one of the biggest races of the season.

“I can tell you every way to lose that race but hopefully not in 2020,” he said.

Willoby grew up in Boulder City and graduated from the high school in 1994. He lives in Henderson, but about a year and a half ago, he bought Diamond Marine Service, 701 Wells Road, Suite D, after the owner died.