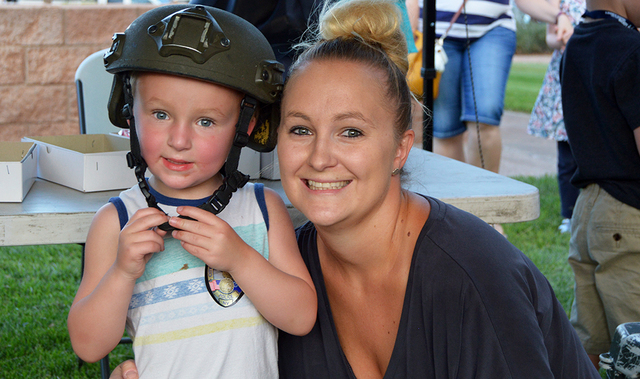 It was a night of fun and discussion as residents of Boulder City and first responders from across Southern Nevada spent an evening together during National Night Out on Tuesday at Veterans’ Memorial Park.

“Today, I am here for the kids. Events like this are important because it shows people that cops are people. We are fathers and we are mothers just like everyone else,” Bureau of Reclamation Officer Eric Rowe said while two girls laughed and giggled as they told jokes through the intercom on Rowe’s police car.

Despite strained relationships with police and many communities across the country, those troubles could not be seen at Veterans’ Memorial Park as children laughed and played, jumped on bouncy castles and looked in awe at law enforcement equipment while officers smiled and played along with them.

“This thing is like a kid magnet,” Siemers chuckled as kids waited for their chance to sit in the pilot’s seat. “It is great to teach these kids about what we do and put a face to our profession.”

Laurell Martin and her family live in Henderson, but always take the time to visit Boulder City during National Night Out because her children have so much fun at the event.

“My kids have so much fun during National Night Out that they are the ones reminding me when it is and that we have to go,” Martin said as she watched her son Joey, 13, doing flips on a bungee cord ride. “Everyone here is so nice and my kids learn so much about law enforcement.”

Martin said going to National Night Out this year was especially important.

“With the way things are right now for police officers and the way the media can sensationalize things, I felt like I needed to take my kids here,” Martin said. “They need to know that these are the people you run to and not run away from.”

One of the main events of the night was the police versus firefighters softball game, but this year’s game was a little different as police and firefighters teamed up to play against Boulder City High School alumni.

The alumni started off fast creating a sizable lead for themselves until the police and firefighters made a furious comeback, only to fall short in the last inning, losing 15 to 14.

There were no hard feelings as the close game ended in hugs and handshakes on both sides.

Boulder City Fire Chief Kevin Nicholson spoke about the importance of National Night Out in the late innings of the softball game.

“It is always great to be out here,” Nicholson said.

“We are here to support the police department and I think it is a little more important to have events like this now to let the public know we are here for them,” he said.