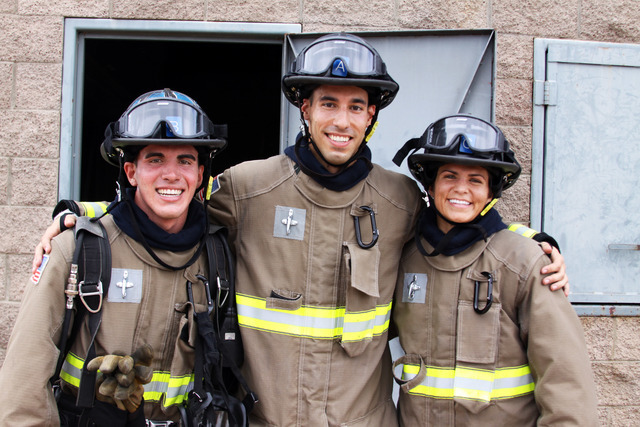 Katherine Marlow of Boulder City, a freshman enrolled at Youngstown State University in Ohio, is among more than 1,200 students awarded scholarships for academic excellence for the fall 2016 semester.

The First Opportunity Scholarship awarded her $1,000 and is renewable for four years.

To earn the honor, students must have a minimum 3.0 grade point average and be full-time students.

The Provost Scholarship, which recognizes high achieving out-of-state students, provided her with between $4,000-$6,000, and up to $24,000 over a four-year period. Recipients must earn a minimum 3.0 grade point average and be full-time students.

Alexas Cota, Thomas Vince and Jake Wilson knew each other in high school and coincidentally went through cadet training together in Henderson.

All three firefighters are now employed by the Henderson Fire Department, but are working at different fire stations in the city.

Wilson and Cota follow in their families’ footsteps as each has grown up around the profession.

Cota also joins her sister Bridget Cota, a 2008 BCHS graduate, who is currently a firefighter in Henderson.