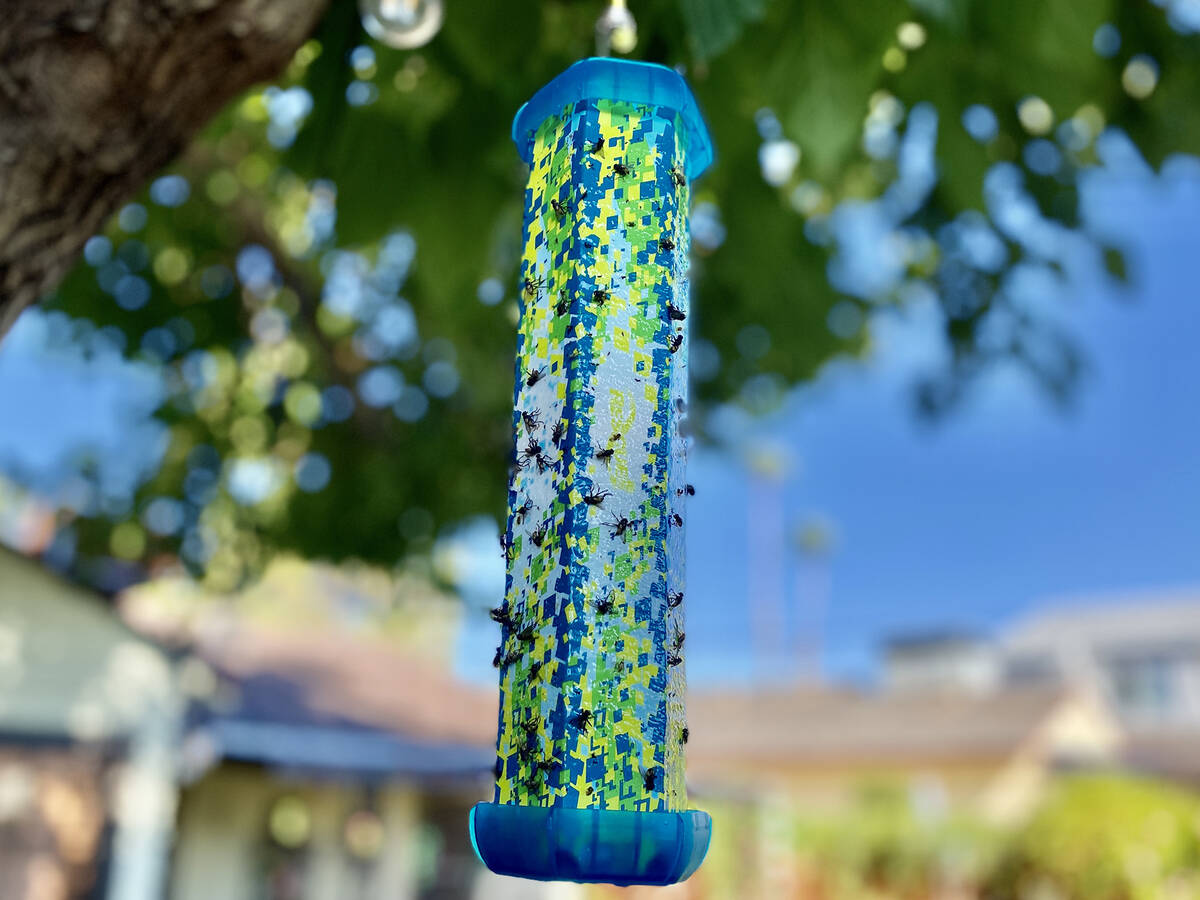 (Photo courtesy Norma Vally) Fly sticks can help trap the insects, which seem to be plentiful this year after a wet monsoon season. 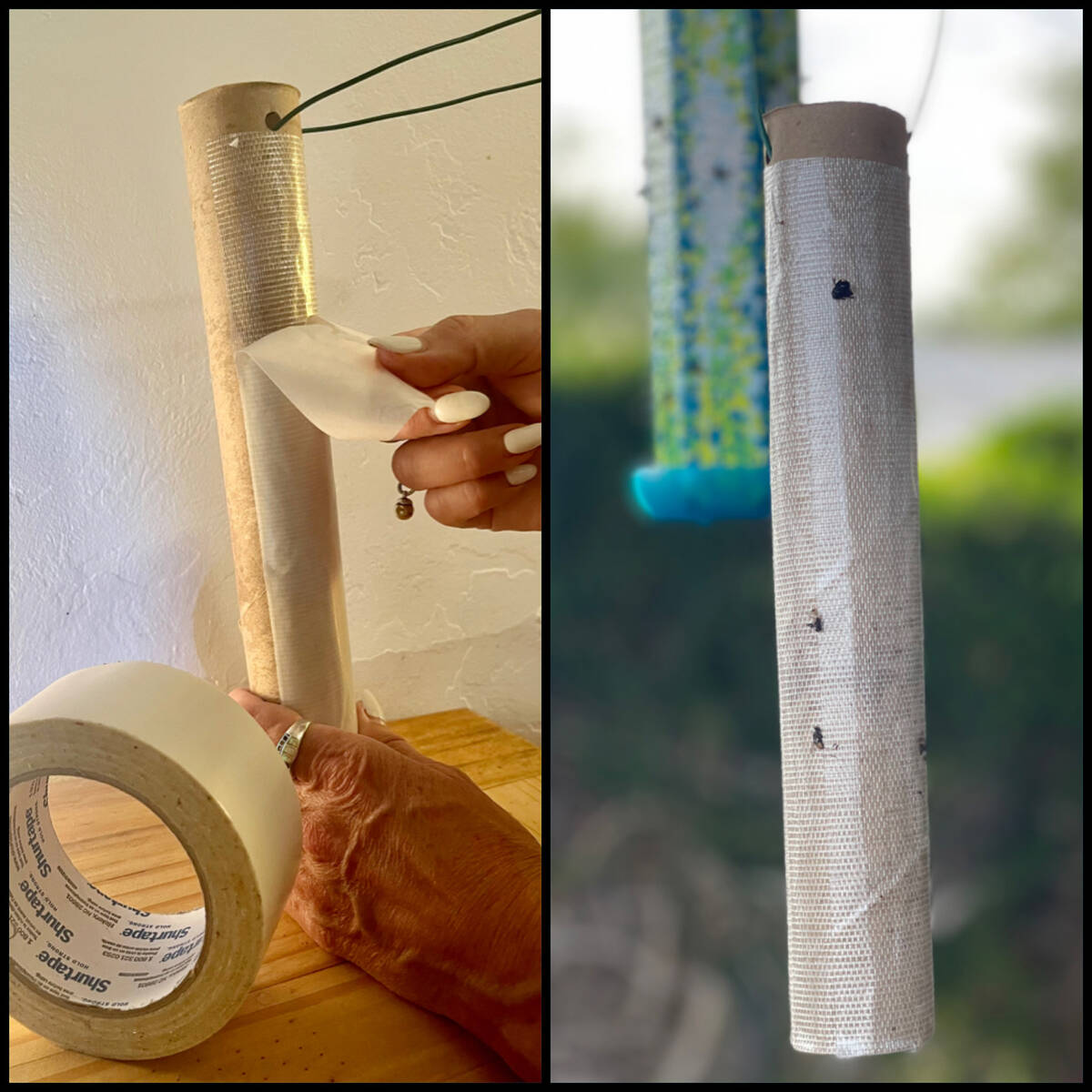 (Photo courtesy Norma Vally) With a piece of wire, cardboard tube and carpet tape, you can make your own fly stick to catch the winged insects.

For all of us, our Boulder City world has been plagued by these pesky and persistent, sometimes biting critters (depending on the species). Homeowners and business owners alike are complaining about them, especially eateries with outdoor seating.

House flies, members of the Diptera order (Greek for “two winged”) are the most common fly in and around homes and stores. Although they have short lifespans (about 28 days), flies reproduce quickly and in large numbers. With this very wet monsoon season, moist breeding grounds are in overabundance, creating perfect proliferating conditions for longer periods of time, producing oodles of flies.

Our local hardware stores can barely keep up with the town’s demand for all things anti-fly. Fly strips, swatters, bug zappers, insecticide sprays — anything to keep these dang flies out of our way. As if their buzzing around our food and face isn’t nuisance enough, the bigger problem is they are potential disease carriers.

I’ve heard a heck of a lot of unique homemade ways to get rid of flies from folks around town. Frustrated that stores were out of flytraps, my friend made a flytrap stick out of three things: a piece of wire, a cardboard tube from a paper towel roll, and carpet tape. And it works.

Before buying or making your fly weapon of choice, make the distinction between an insect repellent or attractant. Attractant? Why would we want to attract flies? Attractants will use scents like pheromones or bluish light to draw flies to a trap and away from your living spaces.

Be aware that some flytraps, like the ones in a bag you add water to, smell delicious to bugs but stink dreadfully to humans. You will not want these anywhere near your family spaces.

Not commonly known, insect repellents are considered pesticides. “According to pesticide law, a pesticide is any substance or mixture of substances intended for: preventing, destroying, repelling, or mitigating insects,” according to the Environmental Protection Agency.

Outdoor foggers like Cutter Backyard Bug Control will clear patios and yards of multiple insects, but be sure to strictly follow directions and do not use them in enclosed spaces.

A homemade repellent can be made with pine oil, a natural fly repellent. Brands like King Pine Concentrated Pine Cleaner Industrial Strength (unlike Pine-Sol as of 2014), actually contain pine oil. A 50/50 solution spray with water is known to repel flies.

There are many essential oils known for being excellent insect repellents such as citronella, clove, lemongrass, eucalyptus, cedarwood and tea tree. You can find several formulas online using these oils in a mixture with vodka or witch hazel.

Happily, manufacturers have moved away from poisonous bait traps that could endanger humans and animals.

“The industry stopped using bait traps for flies back in the ’90s,” explains Darren McLean, a retired exterminator who serviced Boulder City, Henderson and Las Vegas for 14 years. “The bait was small and colorful … if pieces would fall on the ground, they could easily be mistaken for candy and be eaten by pets or kids, which would be highly poisonous to them.”

In an effort to build a better mouse, I mean flytrap, companies like Zevo are making pesticides that are “naturally inspired” and safe to use around people and pets. It’s website states: “The essential oils in Zevo Instant Action Sprays are designed to kill by targeting nerve receptors vital to insects.”

The good news for all of us is once we dry out and temperatures start dropping, so will the flies.