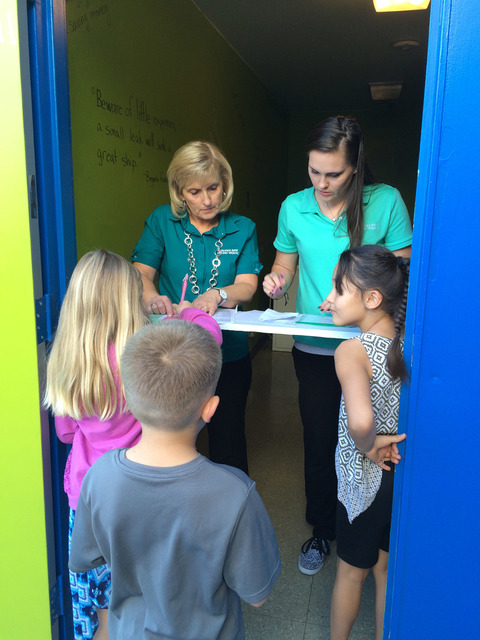 Students at Mitchell Elementary School are getting an early start on learning how to manage their finances with weekly visits to the on-campus banking services provided by Boulder Dam Credit Union.

“We play with real money with real accounts,” said Nancy Ward of the credit union. “The whole idea is to establish the habit of saving at a young age.”

Once a week Ward and one or two of her co-workers set up shop in a small room at the elementary school. There, children can drop off deposits or open savings accounts. The only requirement is that each child have a Social Security number, which parents or guardians can bring directly to the credit union if they are worried about compromising sensitive information.

They also need the $5 membership fee to join the credit union, but the credit union actually provides that for the students — as long as they don’t make any withdrawals during the year, she said.

Because the idea behind the program is to teach youngsters how to save money, they cannot withdraw money from their school accounts at the school. They can, however, take money out at the credit union.

“They can actually set up a secondary school account if they already have an account,” said Lois Czarniak, who regularly works the program along with Ward. “This is strictly for savings.”

“Last year, one kid saved up for a pass to Cowabunga Bay,” she added.

Ward said each child is given a bag to store their money and register to record their deposits. Students can visit with the credit union representatives to turn in their deposits or just drop off their bags. In return, they will get receipts the following week once the money is deposited into their accounts.

The program is now in its second year, and it has expanded to King Elementary School so that those second-graders who opened accounts last year can continue to grow them, Ward said.

Ward said getting to the students while they are young and in elementary school is vital for their future financial health.

“Statistic show that this is the age they establish habits.”

Ward estimates that about 30 percent of the students at Mitchell participate in the savings program.

Each year since 2003 the credit union hosts four or five financial education classes, entitled “You and Your Money,” usually reaching as many as 200 students all together.

Brandi Stankovic has been teaching the three-hour class since it was conceived and, according to her, the class is focused life coaching and money management.

Financial responsibility is an important part of life that can set one up for success or years of tribulation, she said, adding though it is a shame the lessons aren’t taught in classes at schools, it’s a niche the credit union is happy to fill.

“This program benefits the kids and therefore the community,” Stankovic said. “It benefits the credit union, too, because the more educated people are about their finances the less likely they are to have delinquencies. Eighty percent of the students who have gone through the class are still members in good standing with the union.”

It might be surprising that so many students sign up for an extracurricular, three-hour class, but Stankovic said a lot of the students have been touched by hardship over the past decade. Many are legitimately interested in learning how to be financially responsible and better prepared for the future.

In addition, in case they need a little extra motivation, the credit union offers students $50 to start an account, without stipulation, as long as they complete the class.

According to Casey Bacon, one student who took the class this year, the money was nice, but the class was a real success.

“The $50 was awesome, it definitely helped get me in the door,” Bacon said. “But it was really cool to learn about budgeting and savings — . Things that are really important but not taught in school.”

If Brandi Stankovic and the credit union have their way, students will have the opportunity to learn these skills and strategies for years to come.

“When we started this program, I wasn’t that much older than the kids I was teaching,” Stankovic said. “Now I’m teaching their children. It’s a pretty cool thing to be a part of.”