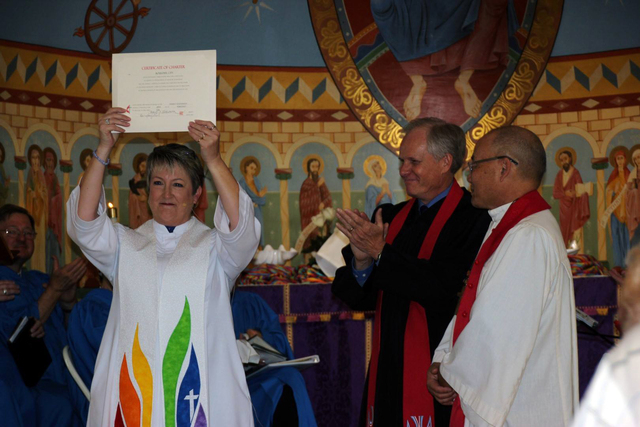 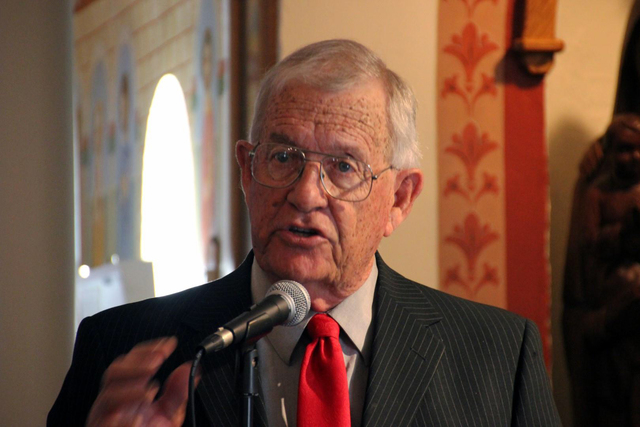 The standing-room-only crowd in the chapel at St. Jude’s Ranch for Children was there to mark the transformation of the Methodist assembly from a fellowship to a church, completely certified by the religious organization’s governing body.

“It is a day to celebrate,” he said, noting this was the first time in his career that he was able to charter a church. “Today is the birthday of your church. You will never forget this day.”

During his address to the members and guests, Hoshibata spoke of congregants’ devotion to the church and “yearnings of your hearts” to move forward with this “monumental” step.

The step also included changing locations for their regular services, moving from the Senior Center of Boulder City to the chapel at St. Jude’s.

“We are doubly blessed today — to be at this beautiful location and to celebrate our chartering,” said the new church’s spiritual leader, the Rev. Sandy Johnson.

The nearly two-hour long service also included welcoming nine new members into the church and affirming their devotion to the Methodist faith.

Toward the end of the service, a large audible gasp, followed by a rousing chorus of “amen” was heard as David McPherson, director of new and vital faith communities for the Desert Southwest Conference of the United Methodist Church, surprised the congregation with a $50,000 gift.

“The gift from our conference will be used in ministry for the growing of God’s church and his kingdom. We are working hard to have a permanent presence in Boulder City and will use the gift to further that goal,” Johnson said.

“It will happen sooner that you think,” Hoshibata said of the church’s desire and intent to build a permanent facility of its own.

He also said that this is by no means the end of the church’s journey.

“This is a new chapter in your life. You will continue growing. Great things will happen,” he said.

The church had 32 founding members, several who remain active with the congregation.

Founding member Brian Fox presented a short history of the church, tracing its origins back to 1999 when a small group of Methodists who were worshiping at Grace Community Church felt it was time to establish their own place of worship.

“It was kinda like stepping off a cliff blindfolded and not having any idea who far you were going to fall,” he said.

After meeting for a short time in someone’s garage, the fledgling organization was able to make arrangements to meet at St. Christopher’s Episcopal Church, from which many members were on hand to witness the birth of the new church.

Eventually, the group of worshipers were able to convince the Desert Southwest Conference of their serious desire to become an independent congregation and the church’s agreement to let people worship at Grace Community Church was terminated, meaning that if any Methodists continued to worship at the church their affiliation with the Methodist faith would be forfeited.

In the years since then, the former fellowship has grown in membership and been able to afford to pay a full-time pastor. Johnson, the first full-time pastor, is their fourth spiritual leader. The church also has adopted the philosophy of open minds, open hearts and open doors, meaning they welcome all individuals to workshop with them.

Charter members Michael and Freda Brazier, who live within walking distance of another Methodist church in Las Vegas, said it is the people and camaraderie of the Boulder City congregation that keeps them coming to the church.

They said it was just as the bishop spoke about in his sermon, noting the spiritual building of a congregation is an empty and meaningless place without the people.