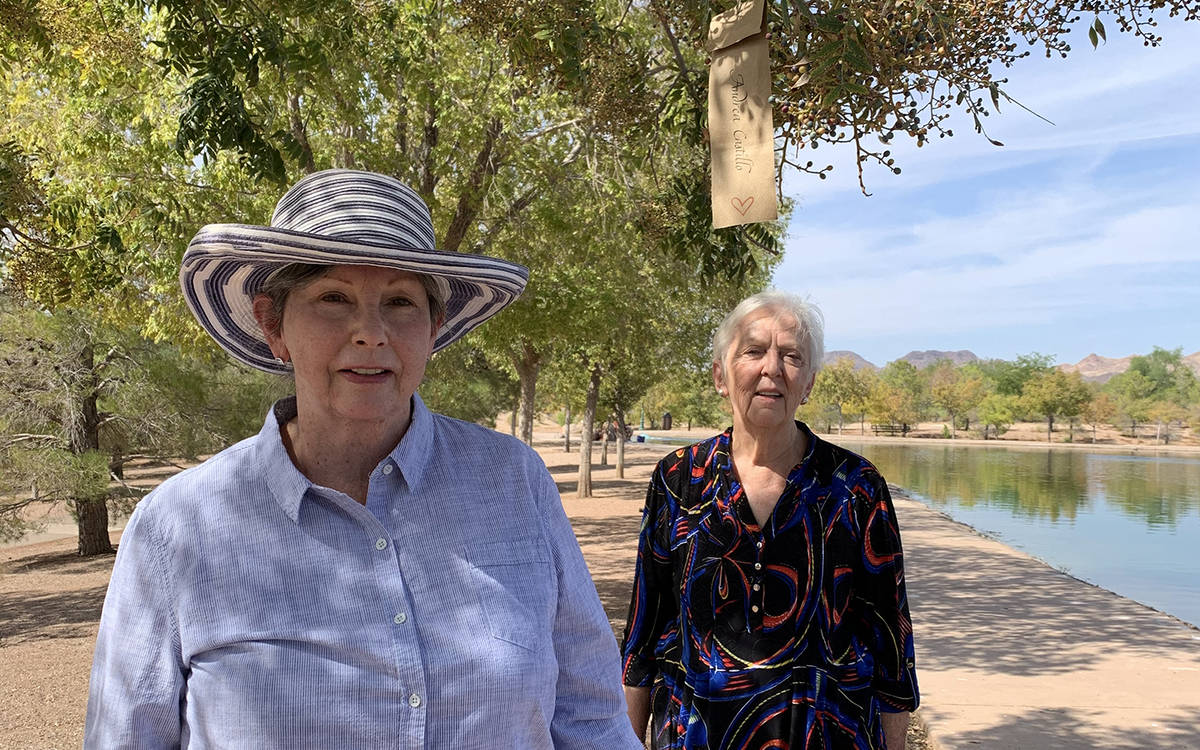 (Hali Bernstein Saylor/Boulder City Review) Mary Lou Johnson, left, and Karen Mulcahy hung 60 weathergrams featuring the names of the victims of the Oct. 1, 2017, mass shooting in Las Vegas on the trees surrounding the upper pond at Veterans’ Memorial Park. They temporary memorial will remain in place throughout October. 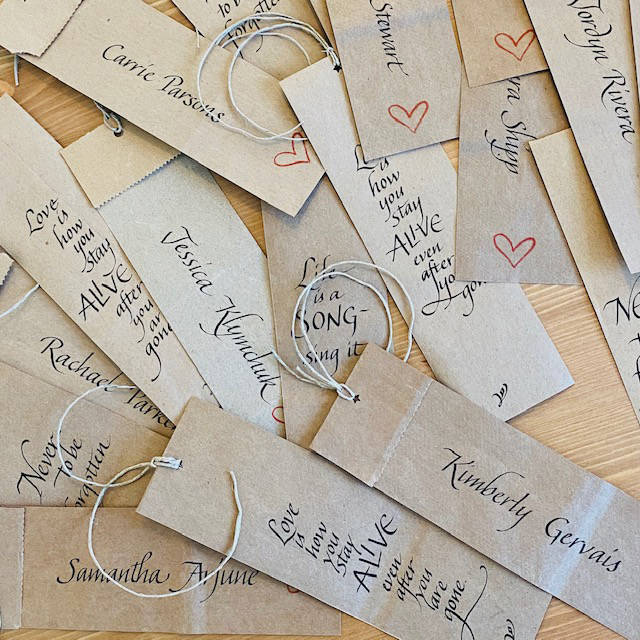 (Mary Lou Johnson) Weathergrams, featuring the names of the victims of the Oct. 1, 2017, shooting in Las Vegas and sentimental sayings, were created by Mary Lou Johnson of Boulder City. 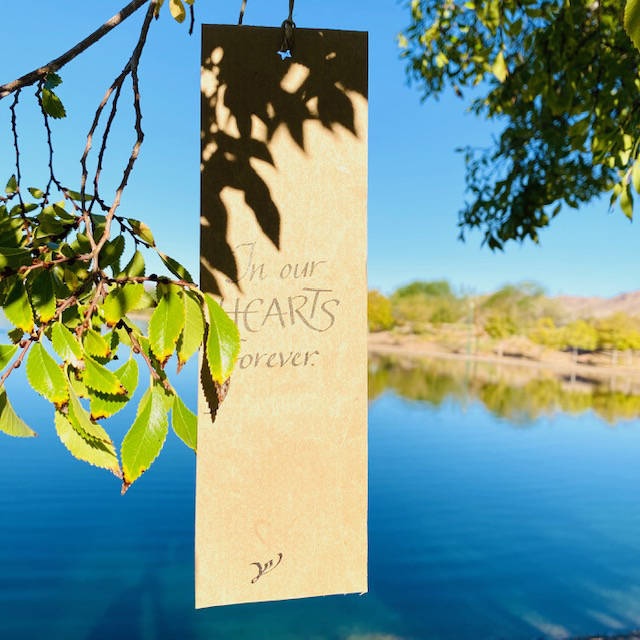 (Mary Lou Johnson) Weathergrams, created by Boulder City resident Mary Lou Johnson, honor the victims of the Oct. 1, 2017, mass shooting in Las Vegas. They feature the names and an touching sentiment and hang on the trees surrounding the upper pond at Veterans’ Memorial Park, 1650 Buchanan Blvd. 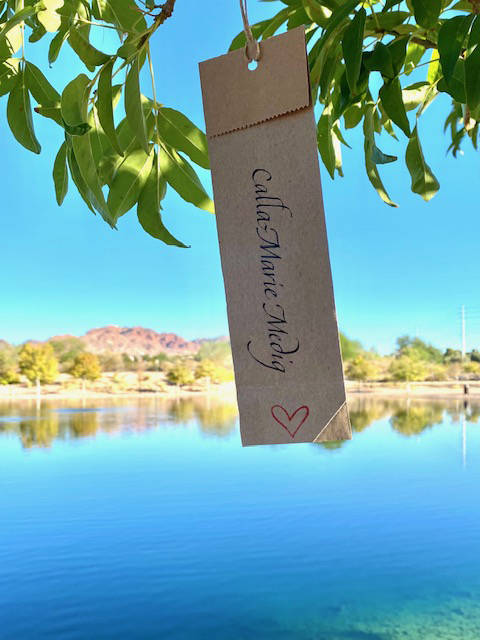 (Mary Lou Johnson) A weathergram bearing the name of a victim of the Oct. 1, 2017, shooting in Las Vegas hangs from a tree near the upper pond at Veterans’ Memorial Park.

Fluttering in the breeze at Veterans’ Memorial Park are poignant tributes to the 60 victims of the nation’s worst mass shooting.

The temporary memorial features weathergrams, small strips of brown paper, each bearing the name of someone who lost their life due to the 1 October shooting in Las Vegas along with a touching sentiment.

The victims’ names are featured on one side and the sentiment on the other, all hand lettered by professional calligrapher Mary Lou Johnson.

Johnson created the weathergrams as a calligraphy exercise through the Fabulous Las Vegas Scribes, a group dedicated to calligraphy and paper arts. When she was done, she was encouraged by Patty Craddock of the group to find a place to hang them.

Johnson contacted the city and was given a permit by the parks and recreation department to install the temporary memorial. The location, surrounding the upper pond at the park, 1650 Buchanan Blvd., was selected because it is a popular place for people to walk and would garner a lot of attention.

In fact, Johnson said so many people stopped her and Boulder City resident Karen Mulcahy to ask what they were doing when they were tying the weathergrams to the trees that it “took forever.”

Mulcahy, a friend and former co-worker of Craddock, was “volun-told” for the project, according to Johnson.

She said she was happy to help.

“Patty knew I was sitting around bored silly,” Mulcahy said.

Mulcahy, who is not a calligrapher, said she appreciates the beauty of the weathergrams and what they represent.

Johnson said weathergrams were developed in the early 1970s by Lloyd Reynolds, founder of the Portland Society for Calligraphy, and are based on an old Japanese tradition. They usually feature haikus.

“He developed the weathergrams a way for his calligraphy students to make beautiful things in a simple way to share their calligraphy with others.”

The biodegradable paper and hemp ties they are made with are intended to disintegrate and weather over time.

As is tradition, they were lettered with Sumi ink, although instead of a symbolic red “chop” at the end, Johnson drew a heart. She made the heart in vermillion ink but didn’t do the first letter in red because they featured names instead of poems.

Johnson said it took her about a day to complete all 60 of the weathergrams.

Johnson, who lives in San Luis Obispo, California, has moved to Boulder City for six months to help care for her grandson and found the Scribes when she was looking for other calligraphers and a way to keep up her skills.

“I hit the ground running,” she said.