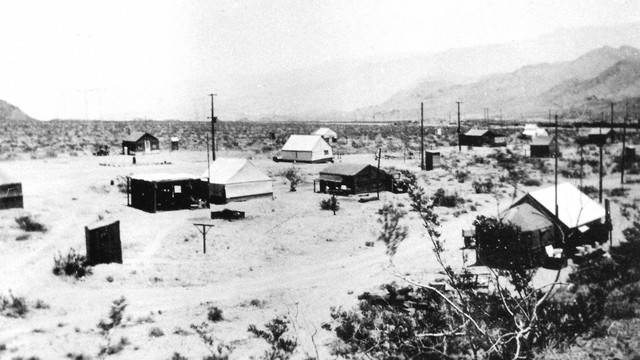 Nearly everywhere you look in the downtown area these days, there are reminders of why Boulder City came into being — statues, bus stop shelters, murals, even the dam-shaped electronic billboard at Nevada Way and Buchanan Boulevard.

But at the edge of town on quiet patches of desert few ever see, the history of Hoover Dam is told through actual remnants that make up the city’s own version of a ghost town.

The old McKeeversville encampment, near the Lakeview residential area off U.S. Highway 93, was originally settled more than 80 years ago. Now, it is a patchwork of old foundations, stone steps that once climbed to swinging front doors, and the curled, dried-out shreds of men’s boots.

It was built by dam workers and their families, amazingly independent and determined souls who used what scraps they could find, even old miners’ shacks, to build shelter in an area that was never supposed to exist.

“It was an integral part of (Boulder City) from the outset, but it has the allure of being an area that was ‘outside the law,’” noted Peter Huntoon, a retired University of Wyoming geology and geophysics professor who has been researching the area.

The story of McKeeversville will be presented by Huntoon as one of the highlights of this year’s 31ers Luncheon on Saturday at the Boulder Dam Hotel. The 57th annual luncheon, originally created to gather together former dam workers, is now a way for their descendants to come together and reminisce.

But it isn’t just a gathering for the ancestors. Every year the community is encouraged to attend the event not only to learn more about the city’s history, but help keep it alive for future generations, said Boulder City/Hoover Dam Museum Manager Laura Hutton.

“This is supposed to be for the community, families, children, to remember the history,” Hutton said.

The content of the event, in fact, has been expanding over the past few years and now includes contributions from local schools, educators and entertainers. In fact, the 31ers educational outreach program started a few years ago by the city’s Recreation Department program coordinator Patty Sullivan, which includes presentations and field trips aimed at educating school children about the city’s history, has become an integral part of the annual luncheon.

This year, along with Huntoon’s presentation, local school children will present a skit penned by Mitchell Elementary School second grade teacher Tim Roy. The short play is based on the story of Robert Parker, who was the Boulder Dam project manager in the ’30s. Also, Rising Stars instructor Lisa Morris and Kara Larsen will lead children in a musical presentation.

In addition to the children’s participation, entertainer Bruce Smith will perform the songs of folk icon Woody Guthrie who, himself, struggled during the Great Depression and was known as the “Dust Bowl Troubadour.”

Finally, portions of the event will be filmed by the Visual Media Club of Nevada State College, with plans to record some of the stories of the descendants, some of whom were children when they moved to Boulder City in the early ’30s. Like the luncheon itself, the idea behind the taping is to “take this piece of history and keep it alive,” according to Hutton.

The event will begin at 10 a.m. in the Boulder Dam Hotel lobby, and lunch will be served between 10:45 a.m. and 12:15 p.m. The performances will begin after lunch, and Huntoon’s presentation is set for 1 p.m. in the museum’s Segerblom Theatre.

The event is $20 per person. Those interested in attending can purchase tickets at the Boulder City/Hoover Dam Museum, or call 702-294-1988 for reservations.