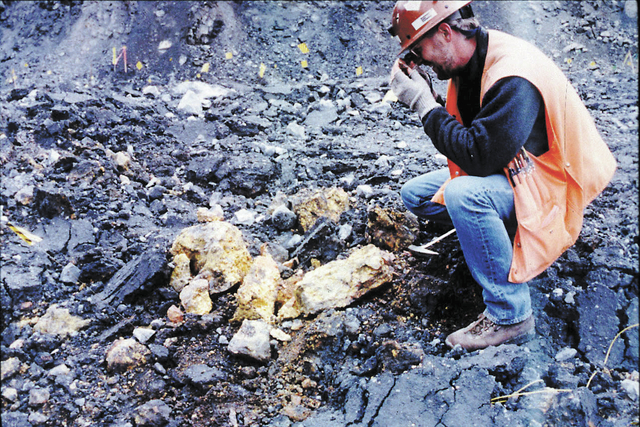 Nevada may be known as the Silver State, but it is home to one of the largest gold mining sites in the world.

Specifically, Cline will speak about the Carlin trend, a unique 38-mile-long gold mining district in Northern Nevada, which she said is “one of the three largest gold sites in the world,” along with sites in South Africa and Uzbekistan.

The district is unique because unlike traditional gold deposits found in veins, the Carlin trend gold is “invisible,” meaning the gold particles are so small that they can’t be seen with a microscope, Cline said.

“So far, there is no other place in the world where deposits like these in Northern Nevada really are,” Cline said.

Cline said her talk will likely focus on the history of the Carlin deposits, which were discovered in the late 1950s by two exploratory geologists working for the Newmont Mining Corp.

After attending a Geologic Society of Nevada presentation, the geologists determined the area’s tectonics might be right to produce gold mineralization. Though the gold could not be seen, the geologists sent samples to a lab for analysis, Cline said.

“(The lab) could quantify the gold but they couldn’t see the gold under a microscope,” she said.

Cline said the Carlin trend’s discovery followed a period during World War II when silver and gold mining in the United States was halted.

“Most of the gold and silver mining was shut down during World War II because gold mining was not seen as being important to the war effort,” Cline said.

The mines that were shut down often flooded, she said, and it was typically not economical to reopen them.

The Carlin trend’s discovery and advances in mining techniques led to “a huge increase in production” of gold in the 1970s and 1980s, Cline said.

“Newmont dominated through the 1980s, then Barrick came in and ended up buying what ended up being very large deposits,” Cline said.

Cline said she’ll enhance her talk with maps and photos, but won’t be able to answer why the Carlin trend exists. That, she said, remains unknown.

“We’re really working on the question, ‘Why are these deposits here at this locality and why aren’t they anywhere else?’ ” she said.