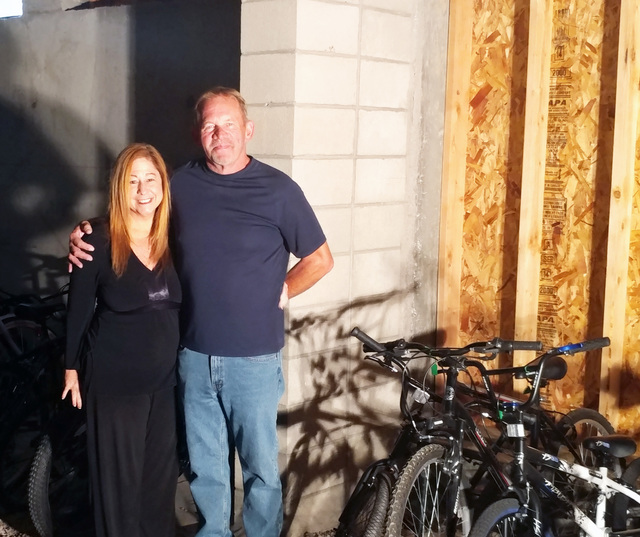 Hunter Terry/Boulder City Review Marci and Tom hope to bring joy to the faces of Boulder City kids in need this holiday season as they fix up bicycles in need of light repairs and get them to families that otherwise might not be able to afford them.

The holiday season is upon us, and while many families will be celebrating with colorfully wrapped gifts, there are too many that will not be able to afford to spend money on extravagant presents. Tom and Marci Riggs are looking to help some local kids in need enjoy a merrier Christmas and happier holidays with bikes that have been refurbished with love.

It is a project that the Riggs began in July when an anonymous retiree approached them with an opportunity to begin picking up bikes that might have had slight defects but that with a little work could be as good as new.

The retailers aren’t allowed to sell the bikes, regardless of how minor the defect, according to Tom. Because of liability law, they would be forced to crush them and throw away the remnants, unless they were able to find someone to take them off their hand and do the repairs. Luckily, the Riggs were happy to step in and get the bikes ready for new owners.

Tom and Marci started the endeavor out of their garage, making repairs and then finding them new homes, but as they ramp up for Christmas, the project grew too large for them to accommodate on their own. Now they have an expanding collection safely stored at the Boulder City Library.

“We’ve given 10 away around the community already. There’s 20 ready to go and another 25 waiting to be fixed,” Tom said. “Thankfully, the library has helped us with a place to put them, and hopefully by Christmas we’ll have had more than 60 bikes reach new homes in just the first six months.”

Once a month or so, the Riggs and some friends from their Rotary club get together for a repair party to fix up as many bikes as they can and make room for the next batch of donations. The next one is scheduled for Sunday.

The response has been far greater than the Riggs expected, according to Marci, especially as at this point they have done very little work to get the word out.

“We’re just relying on word of mouth right now,” Marci said. “We’ve talked to a few people and organizations to get the word out, let them know what we’re doing in case they want to help, and it’s already grown so fast.”

The Riggs have lived in Boulder City for most of their lives. Tom was born in the old hospital, and his father worked at the dam after his family moved to the city in the 1950s.

Marci’s family moved from Los Angeles in 1970 when she was in fourth grade and has lived here ever since. Tom has done the same, save for a few years bouncing between Kentucky, Ohio and Kansas before returning to Nevada.

With such deep ties to the area, they have long had an interest in community involvement and preserving the history of the town as well as in exploring the history around Southern Nevada.

Over the years they have volunteered to help with Angel Tree and Grace Community Church as well as the high school. It was only in the past couple of years that they discovered and joined the Rotary Club of Boulder City’s satellite group. With busy schedules, they were never able to make it to Rotary meetings until they discovered the evening branch, which they now love.

“Our favorite thing about the Rotary is that we make sure to get something real done at least once a month,” Tom said. “A lot of groups toss around ideas and plan for some nice things, but I like that we consistently go do things.”

Their combined family includes their children Shauna Riggs, Shelby Pollak and Katya Shirbroud, who has carried on the tradition of giving to the community by racking up more than 650 hours of volunteer work.

The Riggs are also excited about having their home featured in this year’s American Association of University Women’s Home Tour on Dec. 10. Built in 1941, theirs was one of the first custom homes in the city.

Although they are always accepting donated bikes, if there’s one thing the Riggs could really use help with it would be the repairs, according to Tom, who said they do their best to fix the things they can.

“We have good hearts, but we’re not mechanics,” he said. “We do need help fixing them, because there are a lot of them, and we could really use someone who knows a lot about bikes.”