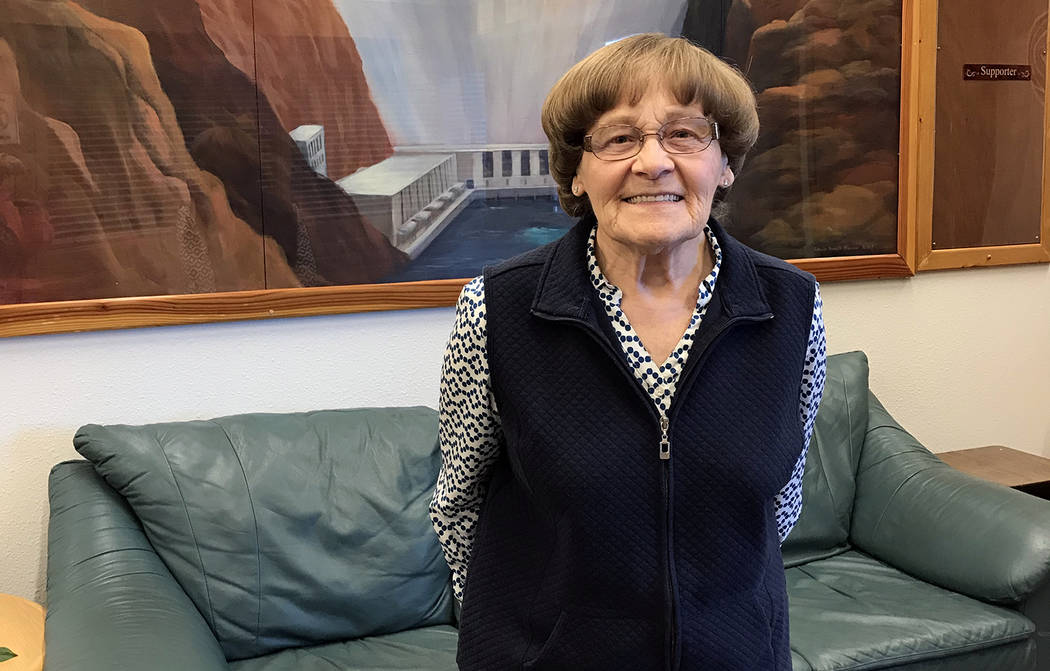 (Hali Bernstein Saylor/Boulder City Review) Teresa "May" Kahl is tireless in her efforts to help others, volunteering at the Boulder City Senior Center, Boulder City Hospital and Grace Community Church.

Teresa “May” Kahl is not one to sit still. She’s always on the go, devoting countless hours to various community organizations. When she finally takes a moment to sit down, odds are she’s in a rocking chair helping raise money for the local senior center.

She said she volunteers because she enjoys meeting people and helping them.

A practical nurse before she retired, Kahl, 84, is a is a nurturer by nature.

As a volunteer, she donates her time and energy to the Senior Center of Boulder City, Boulder City Hospital and Grace Community Church.

“I’m so happy and at peace because I’m out there doing things,” she said.

Her love for Boulder City and its residents is evident in her attitude and echoed by those who know and work with her.

“She is one of the most positive people I know,” said Susan Johnson, who served with Kahl on the board of directors for the Senior Center of Boulder City. “She always looks for the good. She is so committed to serving and blessing people’s lives. She is the champion queen of our Rock, Roll & Stroll event. She can rock for days and bring in the money like no one else. I am blessed to know May and have her as my friend.”

Kahl moved to Boulder City six years ago to be closer to her oldest child, Teresa Jones, or T.J.

“I bought the house across the street from her,” Kahl said. “She’s still working, so I asked for a map with the senior center, hospital and library.”

She also got a list of the city’s “oodles of churches” and happened to feel at home at the first one she visited, Boulder City’s oldest religious establishment, Grace Community Church.

She began helping with the church’s annual fundraiser, the Country Store, and became co-chairwoman of the Circle meeting, a group for women.

It didn’t take long for her to find other places to volunteer. Friends recruited Kahl to work in the gift shop at the hospital, which she did for years before moving over to the long-term care facility where she calls bingo and is on call for activities.

When she checked last spring, she had volunteered 700 hours at the hospital.

“She’s amazing,” said Salome Jarvis, activities director at the hospital’s long-term care center. “I wish we had a million more Mays. She does the job that takes two or three people and does it by herself and makes it happen.”

Jarvis said Kahl always comes to help when asked and is “very, very good to all the residents.”

Kahl began volunteering at the senior center in March 2014 and joined the board as soon as there was an opening, serving from 2014 to 2017.

Currently, she volunteers in the center’s dining room, averaging 50 hours a month serving lunch and coffee and cleaning tables.

“May is such a sweet and awesome lady it’s difficult to sum up how much we love and appreciate her in a just few words,” said Sacha Huysentruyt, volunteer coordinator at the senior center.

“May has an infectious smile that brightens up the room and, no matter what I am feeling or thinking, within minutes I am smiling, too. May is kind beyond measure and her genuine desire to help others is just a part of who she is. She does not even realize the impact she has on those around her. She is full of wisdom and funny stories, and is such a pleasure to be around,” added Victoria Mason, executive director of the senior center.

Helping fellow senior citizens is her passion. The key, she said, is to listen and encourage them, aiding in their acceptance of whatever challenges life they face.

“I always tell them ‘There’s always a place at the table for you’ at the senior center,” she said just days before having her second knee-replacement surgery.

And if Kahl doesn’t have an answer for their problems, she said she will take people to the office at the center and find someone who can help.

Prior to moving to Boulder City, Kahl volunteered near her home in Pennsylvania. She worked with the office on aging and was an ombudsman for residents of nursing homes. In addition to solving issues, one of her main goals was to get staff to treat the people living there as residents and not patients.

“You have to respect them and their privacy,” she said, noting how staff would just walk into residents’ rooms without knocking.

Her efforts also resulted in a state law being passed requiring facilities to provide at least one lockable drawer in every residence for people’s personal belongings.

The law came about as she sought a solution for a World War II veteran who carried a pocket knife so he could peel his apples and cut up pieces of fruit. Staff wanted to confiscate the knife because they were concerned other residents could get a hold of it and hurt themselves or others.

Kahl has received numerous accolades for her efforts in Pennsylvania and Boulder City.

Boulder City Hospital named her the senior volunteer of the year in 2017, and in April she was Preceptor Sorority’s (Beta Sigma Phi) woman of the year.