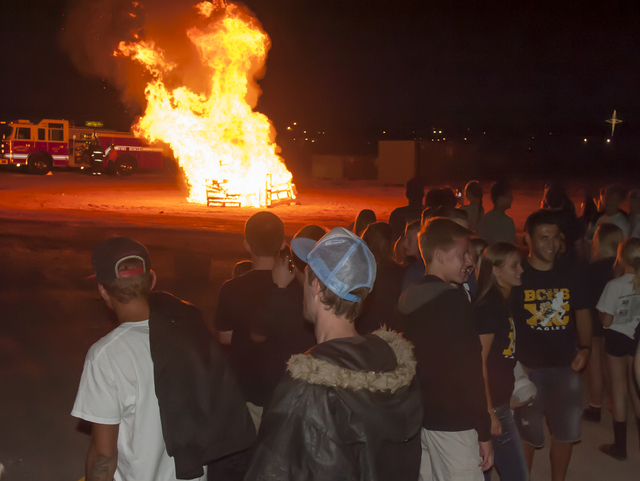 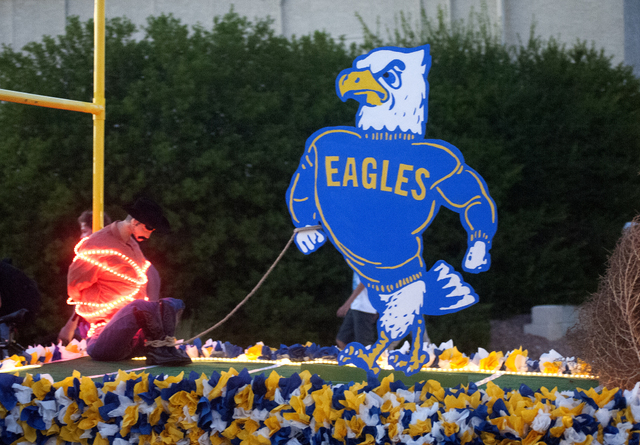 The flames that highlight Boulder City High School’s homecoming celebration may be extinguished permanently, but the fire and passion that ignites the Eagles’ celebration will live on.

More than 300 Boulder City High School students, friends and families celebrated homecoming Oct. 9 as the annual parade weaved through Boulder City on its way to the bonfire at the end of Elm Street, where the news was widespread that this year’s bonfire is likely the final one.

It is often quoted in sports that there is no “I” in team. But there is an “I” — a powerful one — in insurance.

Because of mounting fears and rising insurance premiums to host the event, the bonfire will give way next year to another event.

“This was a great week,” said Tristyn Clark, student council president. “All the events were fun and created memories for everyone.”

Dozens of spectators lined the parade route and applauded the floats built by students that spread school spirit with music, decorations and dancers.

At the end of the route, they basked in the glory of the orange flames that have been a part of homecoming celebrations for decades. Yet no one would claim credit for last Thursday’s event. The bonfire really didn’t exist, if you asked around.

The best days of the bonfire in the 1950s to 1980s saw Boulder City athletes, cheerleaders and other students carve wooden figures of the opposing teams’ players and throw them into the flames.

But times have changed.

Boulder City High administrators and teachers were there as spectators. They weren’t officially involved and would not comment. It was not an event held by the Chamber of Commerce or the city itself.

If the Boulder City bonfire indeed has seen its final glimmer, it is more for costs than for safety. The Boulder City community has embraced the bonfire for decades and there has not been any trouble associated with the event. But there have been some incidents elsewhere across the country, and more school districts and individual schools in small towns have been hit with increasing insurance premiums to hold such events.

“A couple of people get together every year in this lot and there’s a little fire,” said master of ceremony and DJ Mike Pacini, a 1985 graduate who served on the City Council from 1997 to 2009. “It looks like legalities have caught up with the bonfire for now, but we are not giving up. There will still be some sort of event following the parade in the future; we just haven’t decided what it will be. People from the chamber, the city, the school and the community will get together, but something will come out of it. There have been many suggestions.”

The leading option right now is a parade that returns to the football parking lot, or the same lot as the bonfire and ends in a massive tailgate party. Another suggestion was a carnival with rides and games to benefit the school.

“This doesn’t end here,” sophomore princess Kenadee Bailey said. “As underclassmen, we have a responsibility to work with everyone to make sure that there is some sort of event that will carry on the tradition in place of the bonfire. This was a great week, with all four classes competing in float building, and then being in the parade, the bonfire, the football game and the dance. It is a special week for all students. It’s an event like this that bonds all of us into one group with great pride.”

The best float award went to the junior class, edging out the senior class. The freshmen were third and sophomores were fourth.

On Friday, about 1,000 people jammed into the school stadium for the football game against Chaparral and on Saturday the annual dance themed “An Evening on Broadway” culminated Homecoming Week 2014.

During the bonfire, captains from the nine fall sports and cheerleaders gave short speeches. The varsity and junior varsity cheerleaders performed together. The school band was part of the festivities and played the Eagles’ fight song.