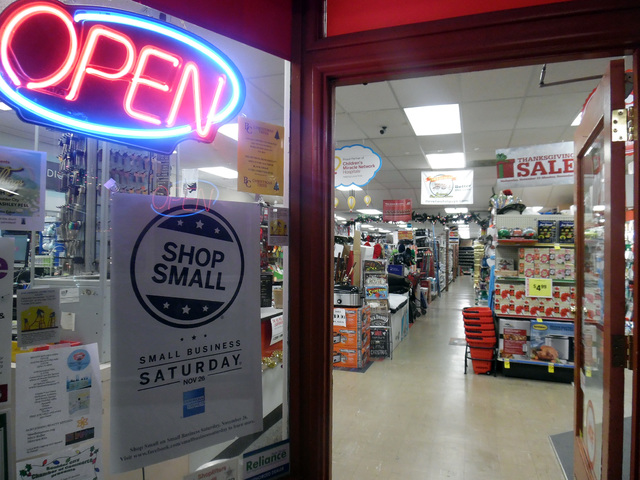 Hunter Terry/Boulder City Review Small Business Saturday is observed the day after Black Friday, giving locally owned businesses like Ace Hardware a chance to take their turn in the spotlight as the holiday shopping season gets underway.

Thursday may be the official holiday, but the day after Thanksgiving has become notorious in its own right. Around the country thousands of shoppers will flock to lines, many forming before dawn, in search of the best Black Friday deals.

It’s the biggest shopping day of the year, with large stores offering staggering discounts to customers willing to brave the long waits and bustling crowds, and it proves extremely profitable.

Small businesses don’t always have the ability to attract throngs of holiday shoppers, but over the past few years independent retailers have found their own way to get in on the action: Small Business Saturday. The day is important for local business owners, as for many the holiday season can determine whether they have a successful year.

“It’s a really important promotion for us because there’s just no competing with the big-box stores,” said Kris Thompson, the proprietor of Boulder City Florist on Arizona Street. “We have to be unique and we have to focus on customer service that those stores just can’t match. Saturday is a great way to draw people back in.”

Now in its sixth year, Small Business Saturday appears to help the businesses that promote it, but Thompson said she’d love to see more local businesses get the word out.

“It’s been doing OK over the years and it’s brought people in, but I’d love to see it grow,” Thompson said. “Thanksgiving is a big time of year for shoppers, but it’s big for us as well. I’d love to see more business participation. I think the more of us that are involved, the more it will grow and help all of us.”

Ace Hardware on Nevada Way is one business that has participated in the event since its inception and, according to owner Jim Schumacher, after 43 years December is still the busiest month. He said Small Business Saturday really helps kick things off.

“It’s important to our business and to the community to encourage people to shop here in town, and I think customers know that,” Schumacher said. “If they find a price that can’t be beat, you can’t fault them for going and shopping at other stores, but if there’s ever anything we can’t do for them, I always send customers down to Home Hardware first.”

Small Business Saturday was launched in 2010 as a response to Black Friday, encouraging shoppers to spend locally, and within a year the U.S. Senate had passed a resolution in support of the day. By the following Thanksgiving, officials in all 50 states had endorsed the day as a way to help keep money in the community and support entrepreneurs.