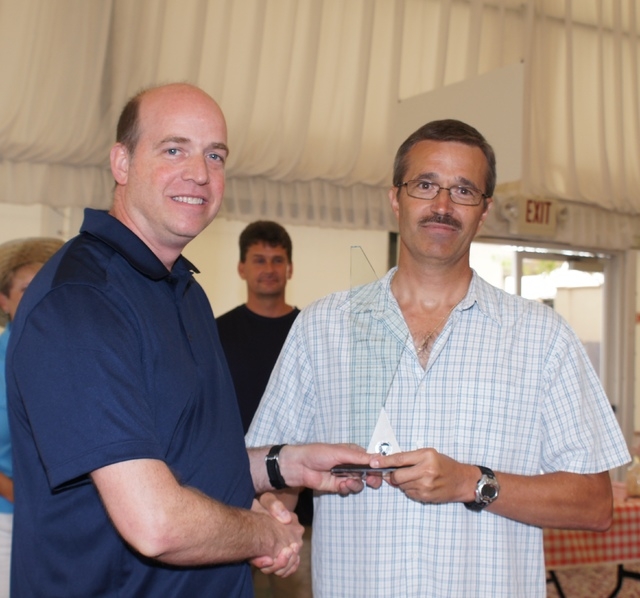 Detective Sgt. John Glenn was named the city’s employee of the year at the annual Employee Appreciation and Service Awards event Aug. 24.

Glenn took over operations of the Boulder City Police Department on Jan. 15 when then-Chief Thomas Finn went on extended medical leave. City Manager David Fraser, who had started the day before, placed Glenn in charge because the captain’s position, traditionally the second-in-command, was vacant.

Next in the command chain were five sergeants.

“Needing command clarity, I felt it necessary to designate which sergeant was, in fact, in charge,” Fraser said. “I met with … Glenn and indicated that I would like him to lead the department for an interim period. He expressed a sincere desire not to fill such a role, but agreed to do it.”

Fraser said the other sergeants supported the decision to put Glenn in charge.

“I asked them to communicate the command change to their respective patrols and officially placed the department in Sgt. Glenn’s hands,” Fraser said.

Glenn led the department for two months until the arrival of Bill Conger as acting police chief.

Fraser said the department ran smoothly during that transition, including during the murder/suicide/arson perpetrated by a Metropolitan Police officer living in Boulder City. Fraser called it “perhaps the single most horrific event in the history of Boulder City.”

“Though the event was shockingly dreadful and resulted in the deaths of an innocent woman and child, there were no peripheral injuries or casualties, either to responders or neighbors,” Fraser said. “Because of Sgt. Glenn’s willingness to step up to leadership and his ability to calmly and effectively lead the department through a crisis, it was my honor and privilege to award him Employee of the Year.”

The annual event was at the Boulder Creek Golf Club Pavilion. Fifteen employees and 18 guests played in the morning golf scramble. The main event was attended by 283 people. Twenty-eight employees were recognized for their years of service ranging from five years to 25 years.