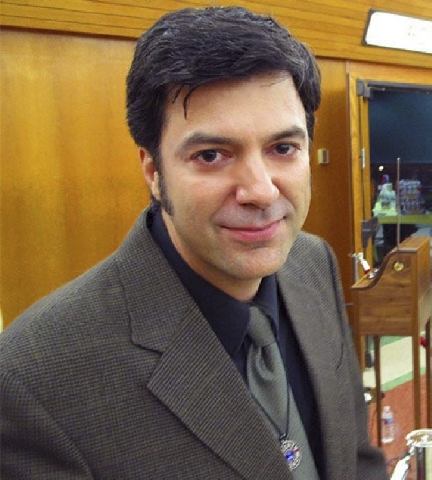 Mike Upchurch, Boulder City class of 1983, has gone from school track and field star to Emmy winner for his work in television.

Upchurch works as a television comedy writer in Los Angeles. One of his most popular works is “Mr. Show.”

“It was an HBO sketch comedy show from the late ’90s that exploded in the mid-2000’s for college-aged comedy nerds,” Upchurch said. Other well-known shows Upchurch has written for are “The Chris Rock Show,” “George Lopez” and “MADtv.”

He is also a house manager for the Steve Allen Theater on Hollywood Boulevard in historic Los Angeles.

This former local works with celebrities such as Chris Rock, George Lopez, and Steve Martin.

“I’ve also worked with some writers that were personal heroes who had worked on other shows like “SCTV” and “Saturday Night Live” and “Mystery Science Theater,” Upchurch said.

In 1999, Upchurch received an Emmy for Outstanding Writing for Sketch Variety Program as part of the writing team for the “TheChris Rock Show,” a group that included Rock and comedian Louis CK.

He has been nominated for the Emmy three other times.

Upchurch said growing up in the safety and security of Boulder City from age 11 to 21 did not help in his work in his chosen field.

“Most successful comedians experienced difficult childhoods in tough neighborhoods, so in that way, growing up in ‘Clean Green Boulder City’ hindered my success,” Upchurch said.

“My neighborhood is referred to as ‘Hollywood,’ by everyone,” Upchurch said, “but there is no actual Hollywood on any map of Los Angeles, which is heavy symbolism.”

The comedy writer graduated from the high school “somewhere between Led Zeppelin and Nirvana.” His major accomplishments as an Eagle were in track and field, but not necessarily in the classroom.

“I graduated at the top of the lower middle part of my class,” Upchurch said. “I set the state and school records in the 100 meter, 200 meter, and I was on relay teams that set records, so I was mostly known as a fast guy rather than the funny guy.”

According to the Nevada Interscholastic Activities Association, Upchurch still holds the 3A state record in the 100 and 200. He set the 100 record in 1983 and the 200 record in 1982. Upchurch remains a track and field legend at the high school.

“I broke the 100, 200, and was the first leg of two record-breaking relay teams as a sophomore, and so my name was written across the top of the gym wall four times,” Upchurch said. “To this day, whenever I meet most graduates of Boulder High School they say, ‘Wait, you’re the Mike Upchurch?’ … because of the track records.”

The track records are now painted at the track at the high school’s football field.

After high school, Upchurch attended the University of Nevada, Las Vegas, where he also achieved his master’s degree in communication with a minor in music and English.

“I also studied coffee and tea and edgy poetry at Cafe Expresso Roma and Cafe Copioh across the street,” Upchurch said.

The writer comes through the area to visit his family, who now lives in Las Vegas. Upchurch returned to Boulder City for this year’s Damboree celebration.

“I go back to Southern Nevada so I can tell the people in California they don’t know what real heat is,” Upchurch said. While visiting, he also took a walk around the high school in which he achieved his record breaking track and field career.

Upchurch has been busy this year writing for the People’s Choice Awards, among other projects.

“I also directed two presentation pilots,” said Upchurch. The pilots are named “Institutionalized,” and “Greenboy: Prescription for Death.” Some of Upchurch’s work can be found on his website at mikeupchurch.net.