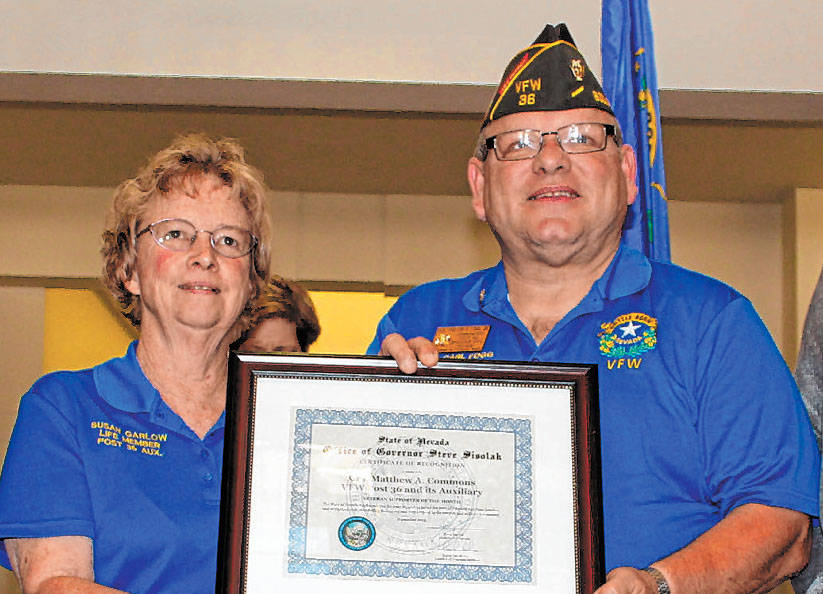 (Nevada Department of Veterans Services) The Rev. Carl Fogg Jr. accepts the Veteran Supporter of the Month award in October 2019 on behalf of the Veterans of Foreign Wars, Matthew A. Commons Memorial Post 36 of Boulder City, along with post 36 Treasurer Susan Garlow. Fogg, commander of the post, was named Veteran of the Month for May by the Nevada Department of Veterans Services.

“I just like to be there for the veterans,” said the Rev. Carl Fogg Jr., who was recently named Veteran of the Month for May by the Nevada Department of Veterans Services. “I am available 24/7 for any veteran. I’m just here to help them out.”

Fogg, post commander for Veterans of Foreign Wars, Post 36 in Boulder City, said he is very honored and proud of the recognition, and especially pleased it came during May, which is Military Appreciation Month.

Helping others seems to be second nature to Fogg, who served in the Navy as a hospital corpsman for nine years.

He recalled a time while he was stationed at Point Mugu in Southern California as part of a response team for President Ronald Reagan when he and a colleague stopped at the scene of an accident on their way home from Long Beach and saved a child’s life.

Fogg said he also was able to save the life of a man who had a heart attack while attending the funeral of his son.

“I did CPR for 15 minutes until the paramedics arrived,” he said. “I was in the right place at the right time. My medical training kicked in.”

“We do a lot for Boulder City,” he said noting their support of National Night Out and the Damboree parade, among other activities.

Fogg also serves as the command chaplain for the Naval Operational Support Center in Las Vegas and is always at the ready to aid the center’s mission of conducting casualty assistance calls and organizing the dignified transfer of the remains of service members who die while on active duty.

He said it was important to him to assume the role.

“Air Force chaplains are phenomenal but they don’t know what it means to be a sailor,” he said about previous service providers for the center.

And he doubles as Santa Claus for the support center, which has been adopted by the Boulder City VFW post.

As an ordained chaplain, Fogg officiates at funerals and weddings.

The Veteran of the Month award is presented to veterans across Nevada who have gone above and beyond the call of duty, specifically with respect to volunteer work in support of veterans and the military.

Fogg said he will get his award from Gov. Steve Sisolak during a program at a later date when COVID-19 restrictions have been lifted.