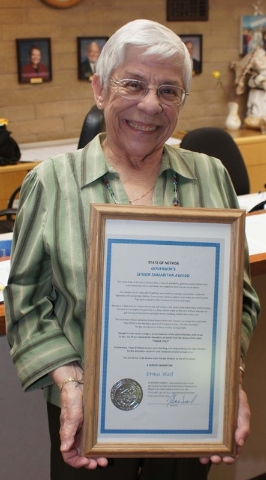 It would come as no surprise to many to hear that Erma Hall was recognized for her service to others — except to Hall herself.

The 85-year-old Boulder City resident says she does what she does because she loves to be around people.

Hall was presented with the Governor’s Senior Samaritan Award Monday for her volunteer work at the Senior Center of Boulder City.

The award names Hall a “valued Senior Nevadan” and recognizes her generosity, independence and self-reliance — traits that helped build the state and build a better future.

“The Governor’s Senior Samaritan Award honors those who deserve our recognition and praise. Their efforts make Nevada a good and kind place to live. Our lives are better for their contributions of these sincere, caring people.

“Though it is not nearly enough, I, as the governor of the state of Nevada, want to say to you … thank you!” the certificate signed by Gov. Brian Sandoval and presented to Hall states.

She was nominated for the award by Tammy Copelan, executive director of the Senior Center, for her willingness to pitch in wherever and whenever needed.

“Anytime you call her to work the front desk or anything else, she’s always gone the extra mile. She is always dependable,” Copelan said. “She is my fill-in lady whenever I have a spot that needs to be filled.

Hall said she was “shocked” by the award and nearly fell to the floor when she heard the what was read from the certificate from the governor.

Hall began volunteering at the senior center shortly after moving to Boulder City from Colorado eight years ago. Before that, she worked in customer service in a military post exchange for 20 years.

Hall said she works a double shift (two four-hour sessions) on Mondays and a four-hour shift on Wednesdays.

“I’m always on call. I’m only five minutes away,” she said.

Hall said part of what keeps her coming back day after day is the ability to help others, especially those who are in a worse situation than she is.

“There but for the grace of God …”

Although she admits to giving “110 percent” of her efforts, Hall said it is hard to keep her still and from doing more. “Anything to keep going,” she said.

A native of New York, Hall met her husband of nearly 64 years, Rolland, while they were both in the Air Force working at the Pentagon.

They were a military family for 30 years, moving from place to place, with all four of their children born in different places: Roger in Virginia, Pat Santala in Tokyo; Sandy Redmond in Ottawa, Ontario; and Kathie Keller in San Antonio.

Copelan said Hall’s military background makes her a detail-oriented person, a trait that is helpful at the Senior Center.

This is not the first award Hall has received for her service to others. Last year, Hall was recognized as the Senior Center’s volunteer of the year.

Humbled by the honors, Hall said there are so many other deserving volunteers.