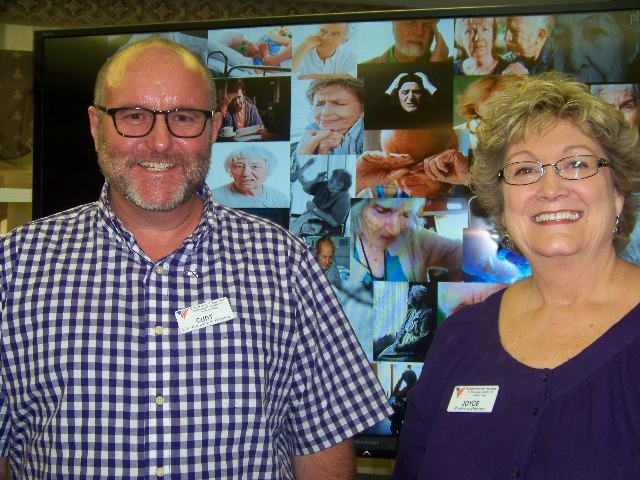 For the past seven years, The Homestead has hosted a special event during Elder Abuse Awareness Week to educate its residents and the community about elder abuse and what can be done to stop it. Year No. 8 was no different.

June 11 brought Homestead residents and community members together to hear about the rights of the elderly, learn about the types of elder abuse, what signs to look for to determine if someone is being abused and what can be done to stop elder abuse everywhere.

Joyce DeHaas, Homestead director, set the tone of the event by telling a story about a women named Florence, who was told that moving in with her daughter Carol “would be the best thing for her” at her age.

Although Carol thought the living situation was just what her mother needed, she saw her mother withdraw, not speak and stay in her room except to come out for meals. Carol wondered why her “mother would shut down like this in such a loving environment” but attributed Florence’s behavior to simply “getting adjusted” to the new living arrangement and felt she would “come around” to her new home.

What Carol did not realize was that Florence was being psychologically abused by Carol’s husband, Albert. When Carol was not around, he’d tell Florence she was stupid and call her names. He’d “make fun of the way she moves or talks,” and tell her if she “doesn’t watch her step,” he would “send her to a nursing home.”

If that wasn’t bad enough, Albert would tell Florence if she told any of this to Carol, he would deny it, take her money and tell everyone she had dementia.

Florence’s story is one that goes unnoticed all too often.

DeHaas told the audience that Homestead employees are “mandated reporters” of abuse. If anyone came to her or staff members with information about abuse or what they thought was abuse or neglect, they would be “mandated to report that to the authorities, whether it is the police department or the state or elder abuse. We take it very seriously,” DeHaas said.

According to the National Center on Elder Abuse, nearly 6 million elder abuse cases were reported in the United States in 2010, which accounts for 9.5 percent of the elderly population. Women made up 67.3 percent of the abuse cases, with the median age of the victim being 78.

Neglect was by far the largest category of abuse, accounting for 55.8 percent. Physical abuse was reported in 15.7 percent of the cases. Unfortunately, as with the story of Florence, 66 percent of the elderly abuse cases are perpetrated by adult children or their spouses.

DeHaas wanted the audience to know they have a right to report an abuse or neglect issue to her or Homestead staff and not be concerned that they might “get someone in trouble.” She emphasized that she and the staff are not worried about getting anyone in trouble.

“We are worried about you and your safety and your care,” DeHaas said. “We don’t put something like that on the back burner” when they receive an abuse or neglect report.

Elder abuse, according to DeHaas, happens in Boulder City, Henderson, Las Vegas, all over the world, which was the reason for the annual Elder Abuse Awareness Week recognition at The Homestead.

No matter where abuse happens, DeHaas assured the audience that they have an advocate at The Homestead when it comes to reporting an issue and finding a solution.

A Homestead resident told the group she “almost didn’t attend” the presentation because she felt she and everyone living at The Homestead was “well taken care of.”

It was apparent she felt being at the meeting was worthwhile when she voiced her disappointment that more “young people” in the community, especially the sons and daughters of older residents, had not attended.

The gathering closed with these words from DeHaas: “I hope you’ve learned something today. I hope you can pass it on to others. That’s the main thing. We’re trying to get the word out there about elder abuse because we want to see it end all over the world, and we can do it together.”