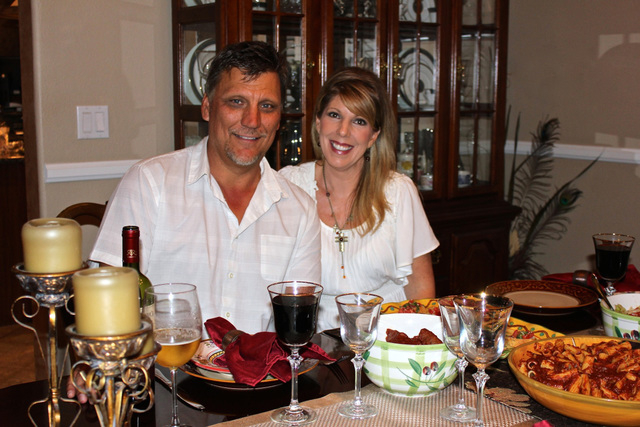 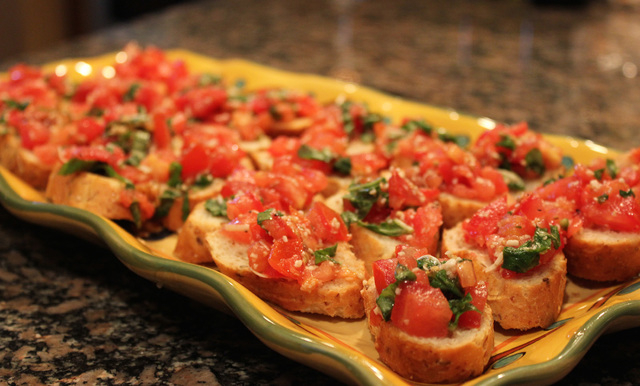 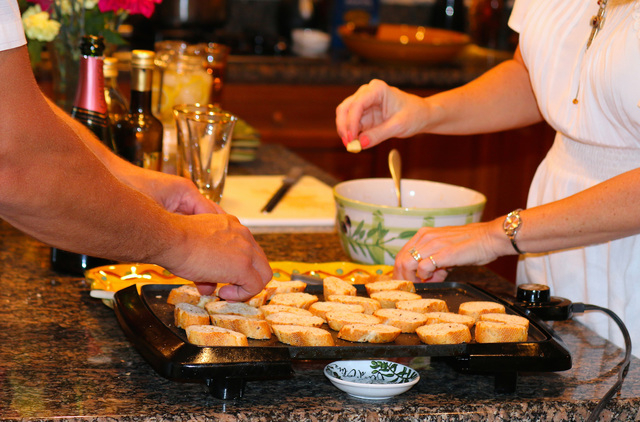 Michigan “Yoopers” Brent and Kris Edlund landed in Boulder City to make a nest for their offspring in 2002. While raising their sole progeny is almost complete, the two know they made the right decision migrating west.

Brent and Kris were both born and raised in the Upper Peninsula of Michigan, known as the U.P. This is where their tag of UPers or Yoopers comes from.

Brent was part owner and manager of a nightclub in Michigan. He had been in casino food and beverage for close to 20 years before landing his dream job as the corporate director of operations for Project Bock.

His job, developing various restaurant concepts with Chef Bradley Ogden, a two-time James Beard Award-winning chef, now fills his life with travel. There are restaurants in Houston and soon to be in Menlo Park, Calif.

Brent said he enjoys the challenge of finding our nation’s fine spirits to be offered in Ogden’s all-American restaurants where he serves American comfort food.

Adding to the schedule of his dream job, Brent was recently elected president of Faith Christian Church.

Recalling the years her husband spent in the casino industry, Kris said, “Casino food and beverage was a lot of hours and responsibility for Brent, but he always seemed to manage to put his family first.”

Brent coached flag football for several years when their son, Dustin, was young.

“He was involved in Scouting and never missed an event, be it jujitsu, a music concert, baseball, football or wrestling,” she said.

Kris, a Michigan Technological University graduate, worked as a mechanical engineer until they moved to Henderson in 1995. When Dustin was born a year later, she enjoyed the opportunity to be a stay-at-home mom until he was in first grade. She began working part time in insurance at that point.

The Edlund family moved to Boulder City so that Dustin could attend the schools here, beginning in kindergarten.

“He’s a senior now and we’ve loved every minute of our time here,” she said.

In her free time she does stained glass windows as her creative outlet.

The busy couple said they enjoy boating and jet skiing on Lake Mead, as well as traveling and discovering new wines and recipes.

“One of the perks of the food and beverage industry is getting new recipes, wines and pairings,” Kris said.

“Brent and I are good at collaborating in the kitchen. He’s the whiz at pairing wines with food to bring out the best in each,” she added.

“We’ve learned that a $10 bottle of wine can be just as enjoyable as a $100 bottle. It’s all in the mix of good food, good company and not taking life too seriously.”

The Boulder City Yoopers are just months away from having an empty nest. Kris said she will have a little extra time to work on stained glass, and Brent will have more time to perfect his golf swing.

While they collaborate in the kitchen with fine wine knowledge and a collection of recipes from Umbria, Italy, handed down from her great-grandmother, the house they call home will soon be a place to find family and friends.

One of the recipes Kris shared is from her great-grandmother, Sophia Baldrica, who came to America in the early 1900s with her husband and six sons. Shortly after settling in Upper Michigan, her husband died and she was left, knowing only a “smattering of English,” on her own to raise the boys.

“Even though I never met her, I was fascinated by the stories of her success as she went on to build a small neighborhood tavern where her older boys bar tended, then added a barber shop next door,” Kris said.

With the opportunities that America offered hard workers, Baldrica was able to buy rental homes, and by the time she died, she was able to leave each of her sons a home.

“I’m told by family members that she loved music, cooking and had a wonderful sense of humor. I wish I would have known her, but I try to keep my connection to her by raising a glass of vino to her each time I make her Sugo recipe!”

¼ teaspoon red pepper flakes, more or less depending on your taste

In a large pot over medium heat, heat olive oil and saute onion, celery and garlic until translucent. Add meats and brown on all sides. Add tomato sauce and tomato paste. Rinse out sauce and paste cans with water and add to pot. Stir in seasonings and blend all well.

Cover and bake in 300 degree oven for two hours, stirring occasionally. Remove cover and add 1 cup dry red wine (Chianti, cabernet or shiraz), adjust seasoning at this point if necessary, stir and return to oven to cook down, uncovered, for another hour or so.

Enjoy immediately over your favorite pasta with a sprinkling of Parmesan, or cool and refrigerate, or freeze for a later date. I like to double the recipe and enjoy half right away and freeze the other half for later.

This is a super-easy and quick appetizer that you could also serve with a big salad to make a light meal.

Place tomatoes, basil and minced garlic in a bowl; drizzle with olive oil and season to taste with salt and pepper. Gently toss to combine and set aside to let flavors marry. (You can do this an hour or two ahead).

Toast bread slices lightly on each side using a grill, broiler or a lightly oiled griddle. Transfer toasted bread slices to a serving dish and top with a generous spoonful of tomato-basil mixture; drizzle with a bit of balsamic vinegar.

You also could put the tomato-basil mixture in a pretty serving bowl and arrange bread slices around the topping mixture, allowing guests to serve themselves.

This is a quick and delicious dessert that you can whip up in about 10 minutes using just four ingredients, one of which is wine, so what’s not to like?

In a double boiler, whisk egg yolks and marsala or sherry until combined. Gradually whisk in sugar and dash of salt. Keeping in double boiler, beat with electric mixer on high for 7-8 minutes until mixture thickens and forms soft peaks.

Can be served warm in stemmed glasses, or chilled and serve with fresh fruit garnish. Serves four.