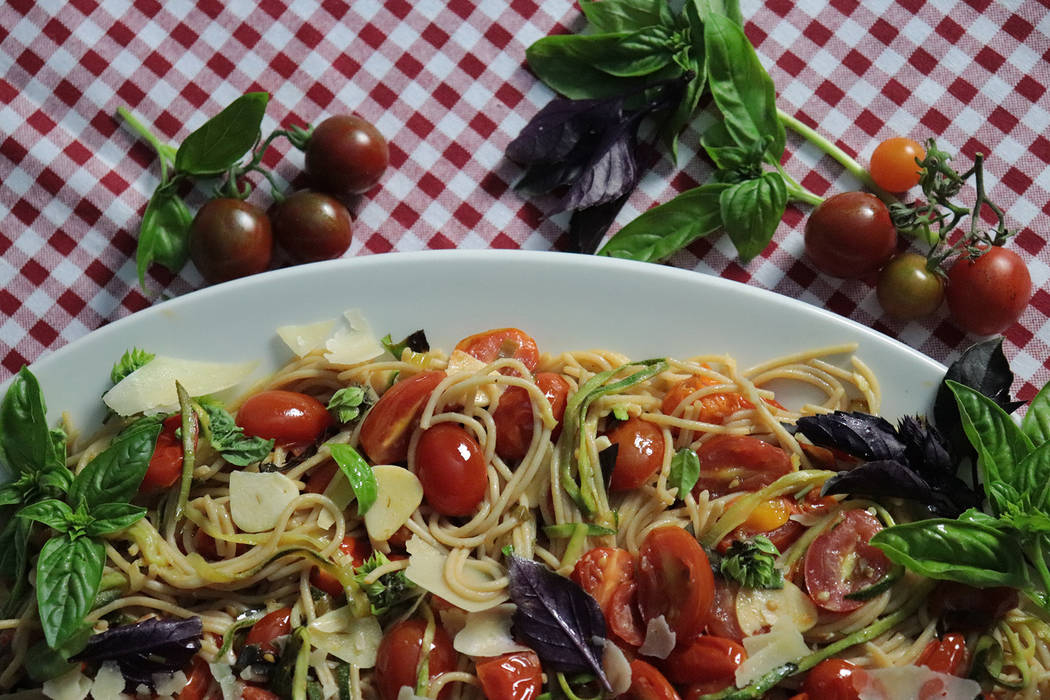 (Patti Diamond) Summer produce, especially tomatoes, zucchini and basil, blend together to create an easy dish that tastes like summer on a plate.

This recipe is called Summer Garden Pasta because it stars these three garden favorites: tomatoes, zucchini and basil. It’s so fresh and light it really tastes like summer on a plate.

In summer, cherry tomatoes can be as sweet as candy and when paired with basil, they’re a match made in caprese heaven. The zucchini takes a supporting role but adds beautiful color and texture. Whole wheat pasta adds a slightly nutty flavor that pairs delectably with the olive oil-based fresh tomato sauce.

It’s hard to imagine something this delicious is actually good for us.

Tomatoes are nutritional powerhouses. Besides vitamin C they offer considerable amounts of other vitamins and minerals. The highest concentration of vitamin C is found in the jellylike substance around the seeds so don’t deseed your tomatoes.

Lycopene is a powerful antioxidant that helps to protect the cells in our bodies from damage and is found in abundance in the cell walls of the tomato. Who likes fat? Tomatoes like fat. Lycopene is fat-soluble so to help your body better absorb it cook tomatoes in a little olive oil, butter or other natural fat.

This dish is vegetarian. To make it vegan, simply eliminate the butter and Parmesan, and use vegetable broth rather than chicken broth. If you’d like to add carnivorous protein, I suggest chicken, shrimp or smoked sausage and it’ll be divine.

I’ve used a spiralizer to cut the zucchini into zoodles (zucchini noodles). Alternatively, you could just thinly slice the zucchini.

If you’ve purchased a bunch of basil, you’ll likely have some left over. Here’s an easy technique to preserve some for later. Blend your basil with olive oil (two parts basil to one part oil) in a blender. Then pour the mixture into an ice cube tray and freeze. Store the cubes in a zip-top bag. Use to sauté chicken or fish or defrost and make into salad dressing.

In Southern Nevada our gardens tend to catch a second wind as the weather cools in late September and October. Hang on to this recipe to enjoy your own garden-fresh produce in all their glory later in the year.

Start a large pot of well-salted water; as it comes to a boil, prepare the spaghetti according to package directions.

There’s something magical about tomatoes cooked in butter. Add the broth, salt and sugar, if using. Only add the sugar if your tomatoes aren’t sweet. This is where the natural sweetness of homegrown tomatoes really shines. They won’t need any sweetening.

Next, add the spiralized zucchini and cook, tossing gently until just tender, about 2 minutes. By now your pasta should be ready. Drain well and mix with the tomato zucchini mixture. Turn off the heat and stir in the fresh basil cut into thin ribbons. Serve with Parmesan cheese and a drizzle of olive oil.