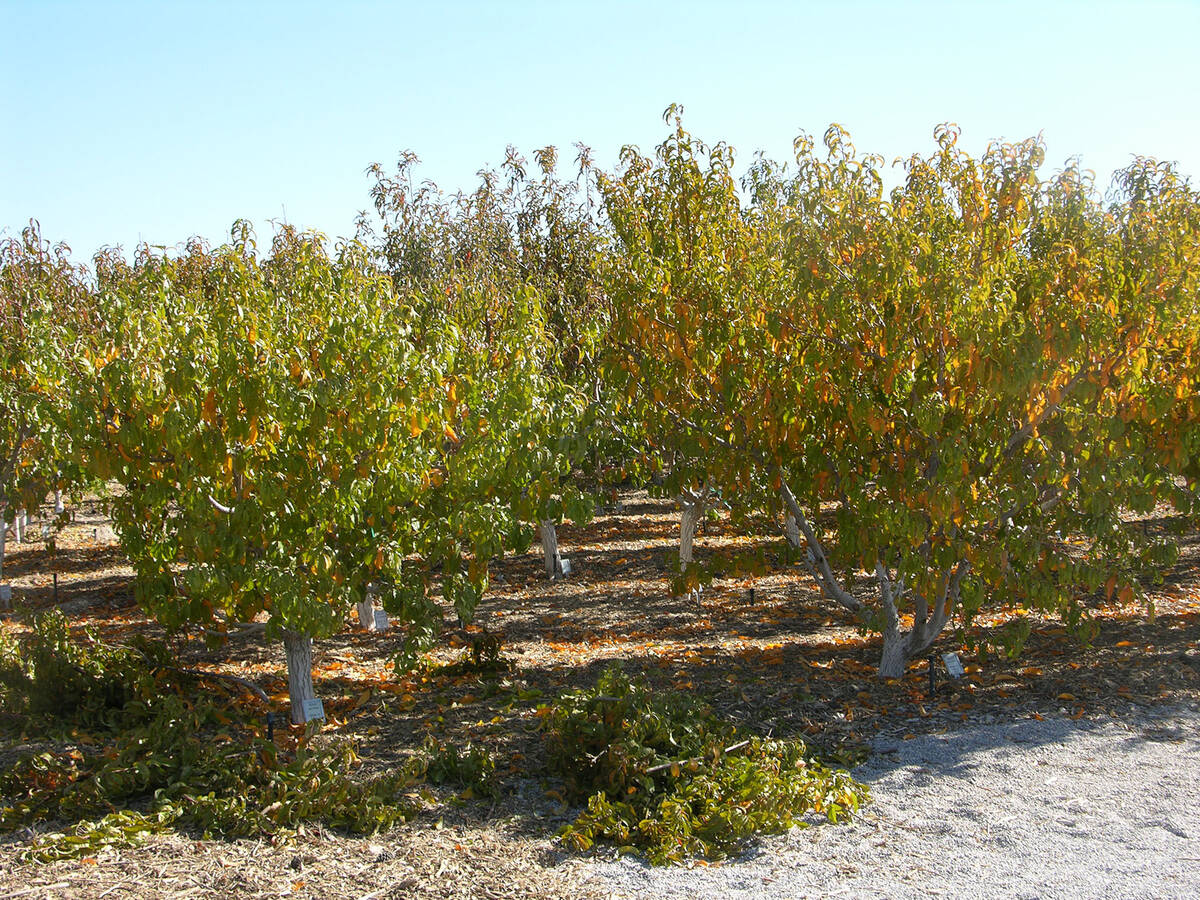 (Bob Morris) The height of peach trees can be lowered by as much as 25 percent. Start by removing the tallest branches to a lower “crotch.” 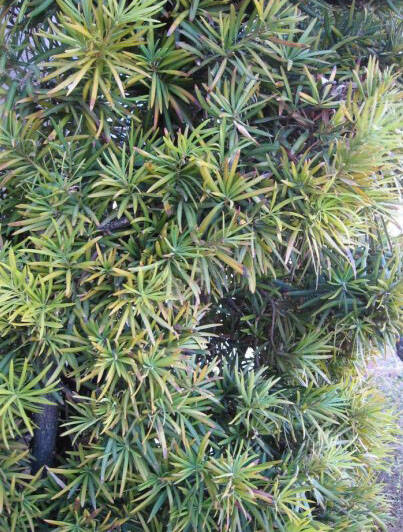 (Bob Morris) You can eliminate yellowing new growth on a yew pine or Podocarpus by adding iron to the soil and making sure the plant is surrounded by wood chips instead of rock.

Q. I have a 25-year-old Podocarpus on the north side of the house. It gets morning sun and afternoon shade. Every spring I apply chelated iron, but the last few years it hasn’t seemed to help much. The leaves look more yellow than green. What would you do and how long would you wait to see improvement, or to know if the plant should be replaced?

A. Podocarpus or yew pine (aka Buddha pine) is mesic and grows well on the north or east side of a wall or home provided the soil is amended every two years and then covered in wood chips. They originally came out of central China and Japan where the soil is better. These plants don’t like soil covered in rock very much. They are not desert plants. Rake any rock back and apply a half inch of compost to the top of the soil, plus a 2-to-3-inch layer of wood chips, and water it in. That will help.

From late January until about April-ish is the time to apply iron to the soil. You can use iron soil amendments like KeRex or Ironite, but the soil must be amended well for it to work. These types of iron fertilizers don’t work well if the soil is covered for several years in rock. The only iron fertilizer that works in this situation is a little bit more expensive but can be worth it. That iron amendment or fertilizer is iron EDDHA chelate.

Get a pound of iron EDDHA chelate fertilizer and apply it now, along with your favorite all-purpose fertilizer; water it in and the new growth will start coming out dark green. Applying iron is only a Band-Aid that will give you a short-term solution to the problem. The soil also needs to be enriched.

Q. My fruit trees got away from me and my apricot is about 20 feet tall and my peach tree about 25 feet tall. Can I reduce their height?

A. You can remove about 25 percent of their total height without problems. In our hot desert we must be careful about removing too much shade because of sunburn to the limbs and the borer problems that often follow. Always remove the tallest branches to a lower “crotch” and leave as many branches as you can less than half an inch in diameter for shading the remaining limbs from the sun.

When lowering these trees dramatically it may take two to four years of pruning to reduce their height sufficiently.

Q. I am concerned about a mold developing at the base of our Canary palms. These palms are approximately 18 years old and have been shaped into a pineapple.

A. I don’t think you have mold at the base of your Canary Island date palms. I think it’s normal. As dead wood gets older, it turns gray instead of brown. I believe it’s part of the aging of the wood on the trunk. Water splashing on the base of the palm tree can also turn the normally brown trunk gray.

All palm trees like to have water but not all the time. As long as your palm tree is not irrigated daily, the soil doesn’t stay sopping wet, and you are happy with its growth and frond color, then don’t worry about it. Palms are higher water use plants and should be watered at the same time as your fruit trees, ash trees, chitalpa, mock orange, large shrubs and other mesic plants.

Q. I moved here last year from Southern California with no place to garden because we lived in a townhouse. I was a university master gardener in Texas and except for the difference in humidity the climates are similar — same planting zone. We bought our house with a yard covered in artificial grass. To my horror I read that once artificial grass has been installed, you can never plant in that ground again and nothing will grow. Can the ground be saved?

A. What is used when some artificial grass is installed is a chemical soil sterilant that prevents weeds from growing in, around or through it. It’s hard to know if one was used in your backyard unless you talk to the person who did the installation. Chemical soil sterilants have a life span affected by heat, light and water. They can last four or five years but not indefinitely. It depends on the soil sterilant.

First, see if one was used. Sprinkle irrigate the area you’re concerned about to see if any weeds grow. About a week or two after an irrigation and some warm winter weather you should see wild mustards starting to grow vigorously. They first start growing near anything that releases heat such as a block wall or house facing south or west. Vigorous weed growth is a good indicator that nothing was used to sterilize the soil and you are free to amend the soil and plant.

If there is poor growth or a poor stand of weeds, then maybe you have a problem with soil sterilants used when the artificial grass was installed. Water the heck out of the same area a month later and see if there is a change in weeds.

If you must replace contaminated soil, remember the soil sterilants are not permanent. Replace only enough soil in planting holes to get plants off to a good start over the next three or four years.

As far as planting zone goes, those numbers only cover the low and high temperatures of a location. Las Vegas is in the Mojave Desert. It is not the same climate as most of Texas. It may feel like it to you, but not to the plants.

Q. There is an old grape vine in the garden under a pine tree of our new house. It looks worse now than it did last November when we inspected the house. Does it need to be watered at all in winter? When and how it should be pruned? What should I do to revive it? It might be also in a wrong position as it is under a large pine tree next to wall, so it probably doesn’t get much sun.

A. Grapes will look bad this time of year until about the second week of March. Then you will see new growth, they will flower and set fruit. This look lasts until about the middle of December. And yes, grapes need to be watered deeply about every two weeks during the winter.

Grapes need at least eight hours of sunlight for full production. Anything less than this will decrease fruit production progressively until it will only produce leaves and very few grapes.

Grape berries (and berry clusters called bunches) are produced either on the first inch of growth from last year (spur production) or it is produced on the fifth, sixth and seventh buds on the growth from last year (cane producers). The easiest way to tell what you have is to see if you can figure out where fruit was produced in previous years or prune the vine to canes and then reprune it again when the fruit is produced. Last year’s growth has a different color, either reddish brown or brown depending on the variety.

Regardless, fruit is produced on buds somewhere along last year’s growth. Prune it accordingly. First get it to produce berries. Once the vine produces berries then you can concentrate on management practices that encourage larger berry size.