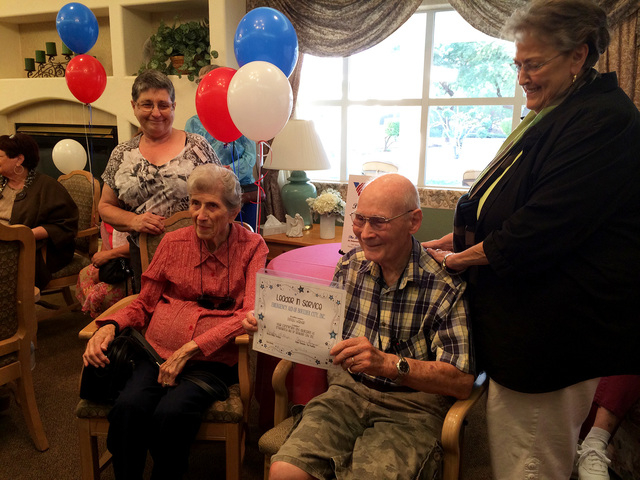 Never one to miss an opportunity, Don Walker said his attitude allowed him to help shape and grow Emergency Aid of Boulder City in an organization that provides financial assistance and thousands of pounds of food to local residents in need.

After roughly 20 years of serving on the nonprofit’s board of directors, Walker has stepped down and was presented with a certificate of appreciation for his many years of work.

“He is extremely well-loved by a lot of people,” said Marylyn Phillips, president of Emergency Aid.

She also said his “wonderful sense of humor” helped the organization’s many volunteers through the trying situations they deal with regularly.

Thompson said that before Walker stepped down for health reasons, he made sure to train others so clients wouldn’t see any changes in service.

Walker said he started in the 1990s when the organization was run by nine directors and had a budget of less than $20,000.

“At that time, we did what we could do.”

Walker said his primary duties were to provide manual labor carrying food stored in the organization’s pantry shed about two blocks to the office where it was distributed to those in need.

During his term as president, Walker said he became good at writing grants and built a good rapport with other nonprofit agencies to help obtain more funds.

“I’m an opportunist,” he said. “If opportunities present themselves, I take advantage.”

Among those opportunities was the chance to obtain its own facility in the Department of Water and Power Building on Nevada Way. When Walker first started, Emergency Aid shared its office with Catholic Charities inside the building that housed the senior center and police department.

He also became the organization’s first chairman of the annual Angel Tree project, which provides holiday gifts to needy children. That project helped raise awareness of Emergency Aid and its work in the community, and boosted annual donations from $15,000-$20,000 to more than $100,000 “without even asking” for funds, he said.

“It gave us a public persona.”

Walker said he is proud of the organization’s many accomplishments during his years of service. He has received several accolades for his volunteer work but said the one from Emergency Aid itself “was the icing on the cake.”