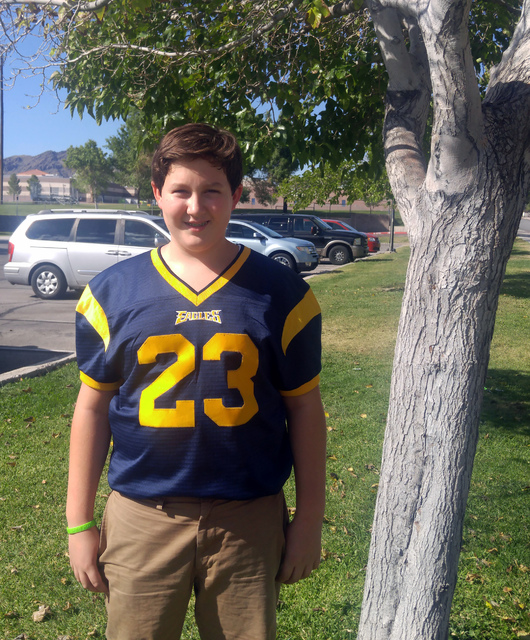 Hunter Terry/Boulder City Review Cameron Johnson of Boulder City hopes to encourage other young people with questions about their sexual orientation or identification to check out PFLAG Youth, a group dedicated to providing support to members of the LGBT community and their allies.

Adolescence can be a challenging time for teens, and even more so if their burgeoning sexuality is different from traditional gender roles.

Depression and mental health issues, as well as abuse from peers and others in the community, often accompany the confusion. Many also lack support from their family as they explore their new sexuality.

Help is on the way for those living in Boulder City and nearby.

“We can help people through this, help other parents figure it out. We want Boulder City to be a place where our differences are embraced,” said Heather Gaylord, one of the founder’s of the local PFLAG chapter.

PFLAG is a national organization, founded in 1972, dedicated to uniting people in the LGBT community with families, friends and allies to provide support education and advocacy. On Tuesday, the Boulder City chapter is launching PFLAG Youth, which aims to offer the same support for junior high and high school age students.

Gaylord came up with the idea of importing PFLAG to Boulder City after she and her family moved to town a few years ago. She has long been concerned with negative things said about the LGBT community, as both her daughter and her sister are lesbians.

PFLAG used to be an acronym that stood for Parents, Families and Friends of Lesbians and Gays, but as understanding of gender and sexual orientation issues have become more commonplace, those terms became limiting and were left behind, she said.

“I really thought it was important to spread information and get a new narrative out,” Gaylord said. “I’d like to see the youth program grow because youth who don’t identify as straight are at risk for abuse, mental health issues and suicide.”

Tuesday’s fall kickoff event is at raising the group’s profile, as well as getting the word out. It will feature outdoor games such as giant Jenga and badminton.

Among those planning to attend is Cameron Johnson, a student at Garrett Junior High. He said young people dealing with such complicated questions really need a place like PFLAG where they can find support and ask questions. It’s something he has to deal with recently as he began questioning his own sexual orientation last year and recently decided to come out.

“I realized last year, but my sister and mom have suspected for a long time,” Cameron said. “I really didn’t know until I saw somebody that I thought was really cute and they weren’t a girl.”

Although he grew up in a religious household, the son of a pastor, Cameron never heard the negative rhetoric at home or at church, and when he did discover his orientation may not fit into traditional gender norms, he said that environment made it a much easier experience.

“I’ve never really been around much homophobia; in our family we accept everyone,” Cameron said. “So it has been much easier for me to deal with than it is for many others, but I still waited six months to tell my family. I wanted to make sure the feelings were real.”

It was still a scary proposition, according to Cameron. He was worried that after he came out he may not have any friends and he was especially scared before telling his brother and his brother’s girlfriend. But they were fine with it, he said.

Some of the members of PFLAG he spoke with advised him to come sooner rather than later. According to Cameron, many of them had been well into adulthood when they came out and had been forced to deal with everything by themselves. They said it would have been so much easier to handle if they had been able to go home at the end of each day to a supportive family where they were loved and accepted.

He says it has been the right decision for him, as everyone has been supportive. He also said that there have been a few other students that have come out publicly and while the response has been generally positive, acceptance has not been universal. There have been some students and teachers who have said negative things about the LGBT community.

“I’ve had great support, but I am coming out publicly because I want to help other people,” Cameron said. “How many other people are there that are lesbian and gay that have no one to talk to? Hopefully they see that I am someone their age that they can talk to and maybe I can help them.”

The Boulder City chapter of PFLAG was founded in 2015, in large part by members of the United Methodist Church, including Gaylord and the Rev. Sandy Johnson, Cameron’s mother, who was thrilled at the opportunity to reach out and offer support to a group that she sees as underserved by the religious community.

“Many Christian churches are, theologically, very conservative, It’s not just the public perception; the reality is that most use very negative language about the LGBT community,” Johnson said. “Many kids hear from the pulpit that the way they are is a sin, that they’re going to hell and God didn’t make them that way. I want those kids to hear that they deserve to be accepted and loved.”

Although Johnson is the group’s chaplain, she also maintained that though there is certainly participation by church members, there is no official church affiliation. Gaylord added that they would love to see the group extend beyond Methodists and Episcopalians.

“We believe God created you how you are but anyone coming to PFLAG is not coming to the church,” Johnson said. “We are there to help, not to proselytize, whether they are a member of a church or not.”

Tuesday’s kickoff event, to be held at the Multiuse Building, 1204 Sixth St., begins after school and continues until 5 p.m.