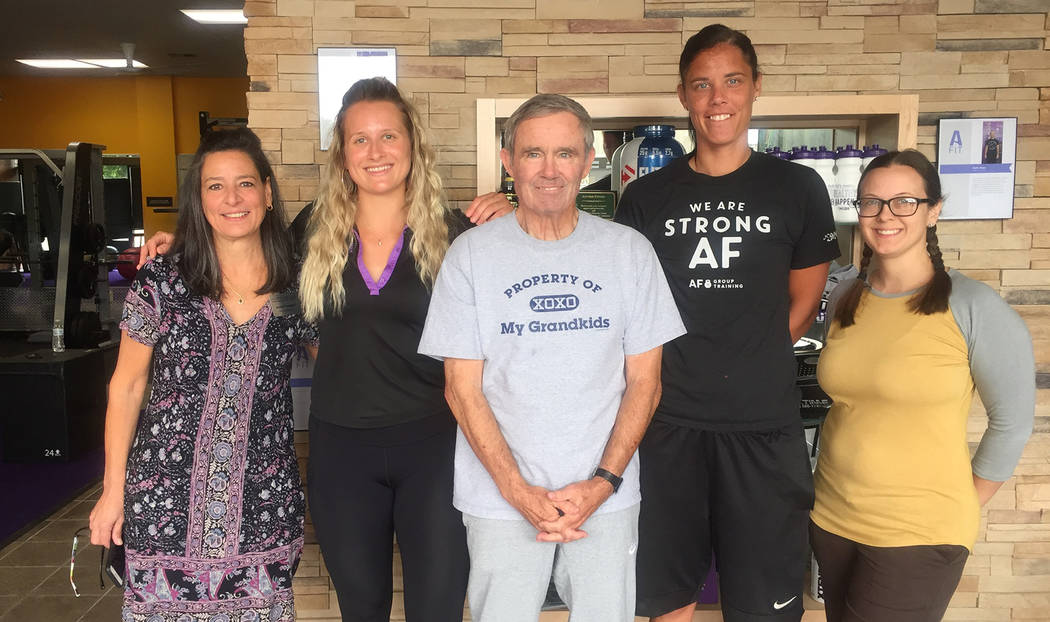 (Jennifer Dempsey) Dave Dempsey of Boulder City is surrounded by, from left, Jackie Campbell, Ravonne Evans, Jenny Wenlund and Amanda Harbo, the women who helped save his life June 18, at the Anytime Fitness in Fort Walton Beach, Florida.

Dave Dempsey is walking a little bit slower these days. And that’s OK.

The fact that he is walking at all is somewhat of a miracle.

The 68-year-old Boulder City man suffered a heart attack known as a widowmaker June 18 while he was exercising at the Anytime Fitness gym in Fort Walton Beach, Florida.

A widowmaker is caused by a 100 percent blockage of the left anterior descending artery, which carries fresh blood into the heart so it gets the oxygen it needs to pump properly. When blocked, the heart can stop very quickly, according to Healthline.

That’s what happened to Dempsey.

After his regular fitness routine, he went to the Florida Anytime Fitness, sat down on the recumbent bike and started pedaling away.

“I don’t remember anything after that,” he said.

What came after is a series of fortunate events that saved his life.

Jenny Wenlund, owner of the Anytime Fitness franchise, said it was around 9 a.m. when a gym user warming up on a stairmaster noticed Dempsey after he had passed out on the bike.

“We didn’t see him struggle. I checked his pulse; he didn’t have one. He wasn’t breathing,” she said.“ We lifted him off the bike, used the AED (automated external defibrillator). … Luckily, there were some nurses across the way, and they did CPR.”

As they worked on Dempsey, someone called 911.

“I’m not sure he was fully breathing by the time paramedics got there. He was gasping for air, and there was some life inside of him. I could tell,” Wenlund said.

Dempsey was rushed to the hospital, which was just around the corner, where doctors were able to revive him.

His wife, Jennifer, said that immediately after surgery to put a stent in his artery, doctors put her husband in a “cold coma,” lowering his body temperature to 94.6 to give his brain a chance to rest. No one knew if he had suffered any brain damage when he was technically dead.

During the rescue efforts, however, no one knew Dave Dempsey’s identity. He entered the gym by using his key fob pass and didn’t have any identification on him. Someone noticed the Boulder City license plate on his car in the parking lot, and police were able to run his plate to get his identity. He also had a book from the Boulder City Library with him.

“Dave is a fixture at the library and Anytime Fitness,” Jennifer Dempsey said.

Authorities checked with the Boulder City gym and library to help verify his identity and find out how to contact his family.

Family members arrived in Florida as quickly as they could to be by Dave Dempsey’s side.

Wenlund said all of the gym’s staff is CPR- and AED-certified, but in her 10 years as owner of the franchise, she has never experienced anything of “this magnitude” before. After hearing from the corporate office, Wenlund said there have been only 30 to 40 incidents similar to Dempsey’s heart attack since the company formed in 2002.

He was lucky he was where he was when he had the heart attack. He had spent the previous three days driving by himself from Boulder City to Florida to visit his former business partner.

Dempsey said there was never any indication that his heart was in distress; his blood pressure and cholesterol levels were fine. He spends about three hours a day in the gym — two hours in the morning and one in the afternoon — runs 5K and 10K races regularly and participates in a half-marathon race once a year. In June, he completed the race with his fastest time in five years.

He and Jennifer Dempsey said they are grateful to Wenlund and Ravonne Evans from Anytime Fitness; Amanda Harbo and Jackie Campbell of Allergy Partners of the Emerald Coast, nurses from a business in the same plaza who are trained to treat allergic reactions; Catherine Santoro, who saw him gasp for air and fall back on the bike; and Cindy Halsey, who works at the hospital in Fort Walton Beach and was at the gym and helped coordinate his rescue.

The Dempseys flew back home, a day before they celebrated their 46th wedding anniversary. They had their son drive Dave Dempsey’s car home; they felt a five-hour flight was less taxing than a three-day drive.

Now, Dave Dempsey is eager to return to his exercise routine and his volunteer work with Lend A Hand of Boulder City, where he has been driving senior citizens to their cardiologist appointments.

“It’s kinda like a doctor treating himself,” he jokes.

“I thought I was invincible,” he said, noting he is sharing his story in the hopes that it will help others.