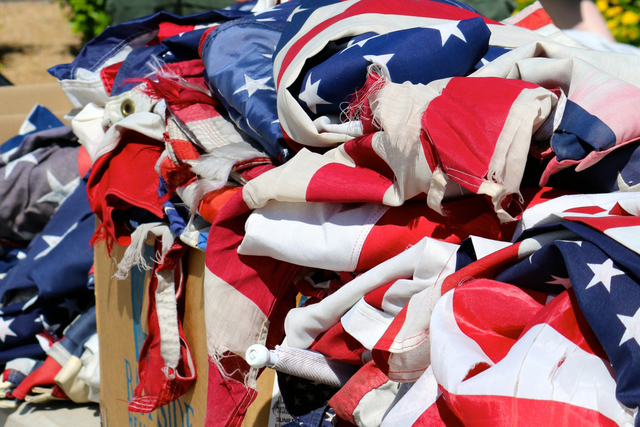 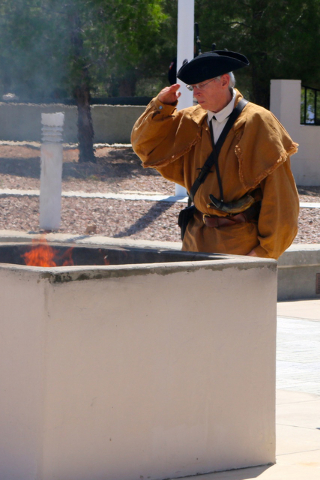 Devoted to making sure the American flag is properly retired once it has been deemed unserviceable, the ceremony consisted of dedication and education about our flag and country through songs and speakers. Veterans from throughout Southern Nevada, as well as state dignitaries attended to show their respect for the flag.

U.S. Rep. Joe Heck, R-Nev., was the keynote speaker and, as a veteran himself, talked about the importance of the American flag.

“This is probably one of the most moving ceremonies that I have been to,” Heck said. “(It was) very well-organized, great speakers, the precision with which it’s executed — it was like a true military operation. It was very impressive to see what the Daughters of the American Revolution were able to do today.”

Heck said he has been to flag retirement ceremonies since he was a Boy Scout. However, this was the first time he was able to attend the ceremony in Boulder City because of previous scheduling conflicts.

Heck spoke about what the American flag signifies, mentioning that it is draped over the shoulders of our Olympic Heroes and over the caskets of our fallen heroes.

“When you look at everywhere, from the beaches of Normandy to being planted on the moon, it’s amazing to think where our flag has been and all that it symbolizes: the power, the strength, the dignity, the freedom that makes America,” he said.

“As many people have said here today, the flag is the symbol of everything that makes this country great. And for those that have worn the uniform and that have served under the flag and have sacrificed blood, sweat, tears — it’s all about making sure that our flag flies high, flies right, and to make sure that the flag is taken care of at all times, even when it’s no longer serviceable. … We fight for our flag, we fight for our nation, we fight for our brothers and sisters, and the flag is a symbol of that. So we want to make sure it’s accorded its due respect throughout it’s lifespan.”

Toward the end of the ceremony, veterans were recognized for their service. Then, those assembled adjourned to the Walk of Life area where the flags were burned.

Linda Knapton, vice regent of the Valley of Fire Chapter, said that the cemetery built the fire pit used to burn the flags specifically for their ceremony.

More than 1,000 flags were collected throughout the year with the help of the Boulder City Fire Department and the veterans cemetery, but only 25 flags were burned during the service Saturday morning.

Vikki Allen-Gaskill, chapter regent, said they only burn cotton flags during the ceremony because flags made of nylon and other materials release toxins into the air when burned. Those flags are sent to the pet cemetery, where they can be burned in a confined building.

Allen-Gaskill, who calls herself an Army brat, wore a sash covered in pins representing her involvement with DAR. Most of the gold pins on the sash represented patriots she is descended from who fought in the Revolutionary War.

She said ceremonies such as the flag retirement have always been a part of her life.

“The first time I ever came to one, I was floored,” she said. “My whole family has been military, and I didn’t expect to be.”

Allen-Gaskill and Knapton work year-round to plan the flag retirement ceremony. As soon as one finishes, they are back to the drawing board the next week.

“Just to make sure that it does run smoothly because we contact so many people, and there are so many organizations that are involved, it’s an ongoing thing,” Allen-Gaskill said. “Once this one is shut down, bright and early on Monday we start up again.”

According to Allen-Gaskill and Knapton, the ceremony was started years ago by an organization member after reading about some children who desecrated a flag with spray paint, which caused community outrage. The chapter regent asked for the flag so she could dispose of it properly, starting the organization’s involvement with the ceremony.