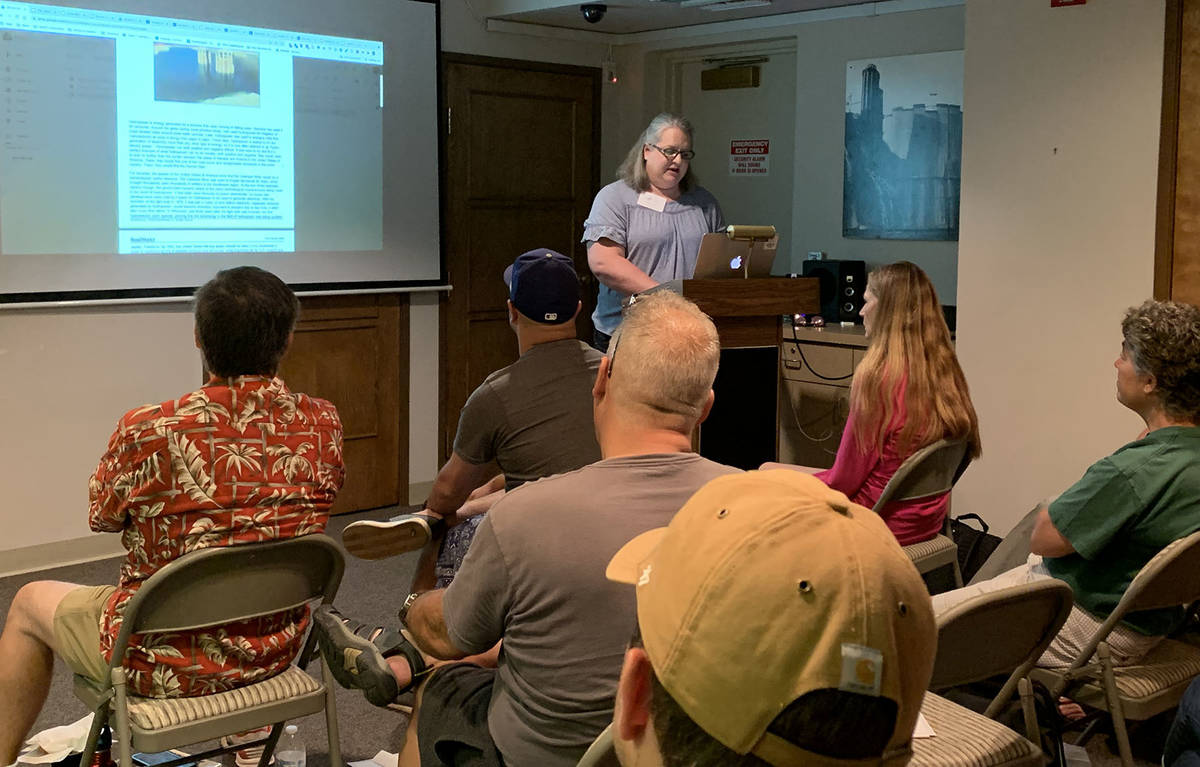 (Hali Bernstein Saylor/Boulder City Review) Betsy Blount of San Antonio, Texas, shares pieces from her new lesson plan that utilizes information she learned during the National Endowment for the Arts’ “Hoover Dam and the Shaping of the American West” program, which concluded Friday, July 9, at the Boulder Dam Hotel. 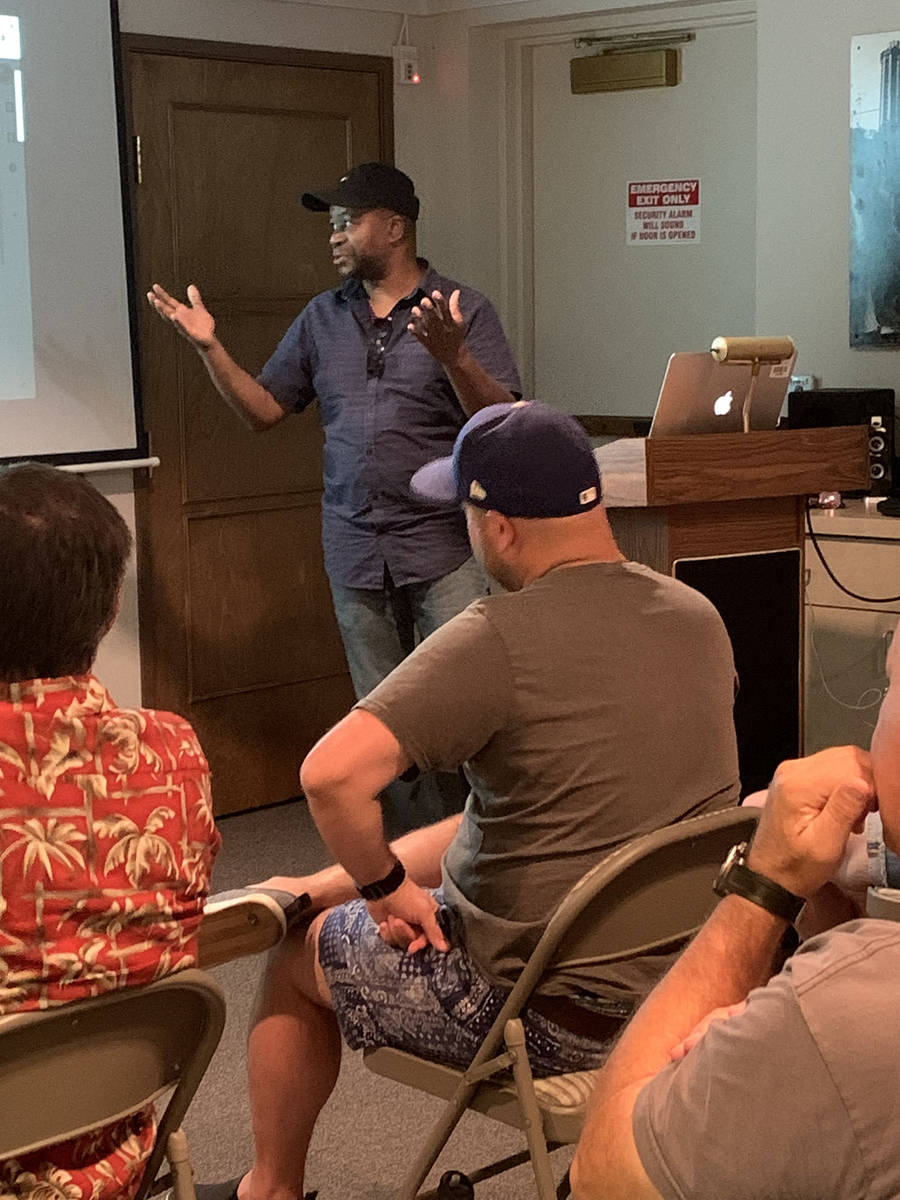 (Hali Bernstein Saylor/Boulder City Review) Bashar Abdullah of Yuba City, California, who teaches 11th grade history, shares with fellow teachers what he learned during the two-week “Hoover Dam and the Shaping of the American West,” program presented by the National Endowment for the Arts that concluded Friday, July 9, at the Boulder Dam Hotel. 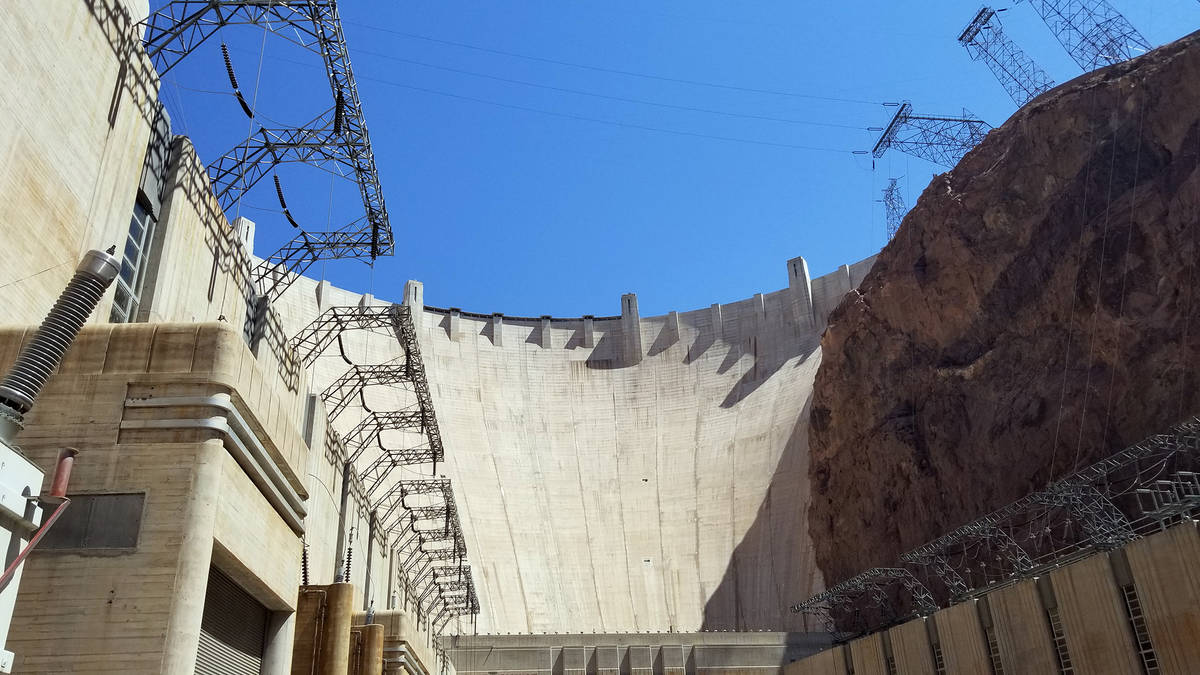 The impact construction of Hoover Dam and how it shaped the American Southwest was the topic of a recently concluded two-week program for educators sponsored by the National Endowment for the Arts.

Aside from the seven states served by the dam itself and its influence on the Southwest, Hoover Dam’s impact can be felt across the continental U.S. and as far away as Alaska.

“Just to see it in person brings it all to life,” said Shelise Hague, a sixth grade teacher from Anchorage, Alaska.

She was one of 25 educators from across the nation — and one of two from Alaska — who descended upon Boulder City for a two-week class about “Hoover Dam and the Shaping of the American West,” which concluded Friday.

“I was very interested in how construction of the dam impacts an area,” she said, noting that there are similar projects being built or planned in her home state.

Traveling to the area also helped her “connect with the lower 48” states.

“It was hot, but that was good to experience so I know what workers had to go through,” she said, noting that the course exceeded her expectations.

Presented by the National Endowment for the Humanities, the class was offered to middle and high school teachers as a way to provide unique insight into construction of the dam and how it affected progress in the area.

In addition to lectures by leading professionals, the course included a visit to Hoover Dam, tours of the area and access to the Boulder City/Hoover Dam Museum’s archives.

“The whole point is to bring teachers … for an immersive experience in the Hoover Dam,” said Anthony Arrigo, an associate professor of communication at the University of Massachusetts, Dartmouth who is the project director and author of the book “Imaging Hoover Dam: The Making of a Cultural Icon.”

Most teachers have a limited awareness of Hoover Dam and don’t understand how far-reaching it is, he said. The project provides a balanced perspective, including looks at how the dam impacted people, the environment, water and power.

“A lot (of the participants) had never been out here to see it in person,” Arrigo said.

UNLV associate professor of history Michael Green, who serves as project consultant, said one of the great things about the class is that the teachers go back to their homes and can see connections between local projects and what happened in the Southwest.

“They bring something back for teachers and students.”

Arrigo and Green emphasized that the program was not tailored specifically for history teachers and that those who teach science, math, social studies and English could also find ways to incorporate what they learn into lessons for their students.

Betsy Blount of San Antonio Texas, who teaches U.S. history to eighth graders, said the class helped her create lessons that focus on the cost and benefits of building the dam and how it helped the West develop.

While sharing a 120-page document about how to deliver content to students, she explained a lesson involving a “decision tree,” which prompts students to deliver pros, cons and alternatives for a specific question. In this case it was: “Should Hoover Dam have been built?”

She said she enrolled in the class because she is always looking for new and inspiring ways to teach her students. She said traveling to the area provided context that she couldn’t get from other sources.

For example, among those presenting programs were architecture expert and holder of the Commonwealth Professor’s Chair in architectural history at the University of Virginia Richard Guy Wilson, whose father actually ran the company that made shovels used during construction of Hoover Dam, and Donald C. Jackson, a history professor at Lafayette College in Easton, Pennsylvania, who is a noted historian of water resources and the author of five books and numerous scholarly articles on the history of engineering and dams.

Boulder City resident and author Sally Denton also spoke, highlighting her latest book, “The Profiteers: Bechtel and the Men Who Built the World,” and what it was like to grow up in the community.

Bashar Abdullah of Yuba City, California, who teaches 11th grade history, said he has always been interested in learning about the human cost of development, in particular how it impacted indigenous people.

The course allowed him to look at American capitalism and Western development, with Hoover Dam serving as a symbol of progress.

“It exceeded my expectations,” he said of the course. “There is so much I can incorporate into U.S. history and environmental studies and ethnic studies.”

Chris Reid of Houston, Texas, who teaches U.S. history and economics to 11th and 12th graders, said he was interested in learning about how this span of history impacted people’s living wages and how that compares to today’s pay scale.

Learning how the dam was built brought a unique perspective to him. He said he was especially appreciative of having access to the museum’s archives.

“The documents in the archives are great. It has a lot of primary sources, oral sources and photos.”

The information he and others gleaned from the archives will allow them to create courses with details they otherwise would be lacking and unable to get.

Green said this is the fourth time the National Endowment for the Arts has presented the course.