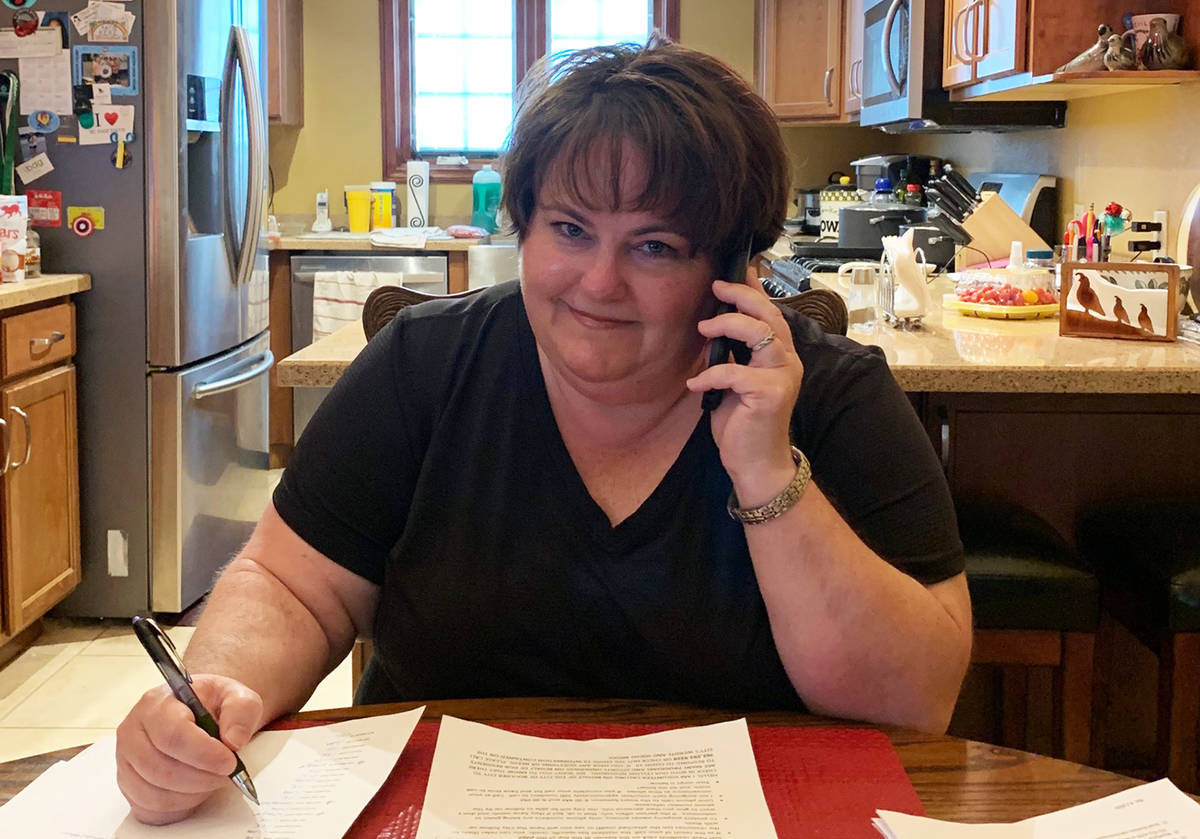 (Kelley Gray) Boulder City resident Kelley Gray, a nurse at outpatient surgery centers, called several hundred locals to check on their welfare on behalf of the city during the COVID-19 pandemic.

Those words were most commonly heard by volunteers who called virtually every residence in town on behalf of the city to check on their welfare as they followed stay-at-home directives to reduce the spread of the novel coronavirus.

“Whoever had the idea for this, it was fantastic,” said Councilwoman Judy Hoskins, who made several hundred calls. “It made people feel good.”

Michael Mays, Boulder City’s community development director, said the idea developed after helping Lend A Hand of Boulder City get volunteers to make calls to the nonprofit’s clients. He worked through the city’s Emergency Operations Center, which coordinates volunteers’ activities.

Mays said city volunteers who manned the phone bank said one thing kept coming back to the operations center: how appreciative people were that someone cared enough to check on their welfare.

From there, he and Fire Chief William Gray, who heads the operations center, decided they could reach out to everyone in the city.

Mays said they gathered all the telephone numbers associated with residential utility bills and removed all information that identified people to compile their list.

He said they came up with 5,500 households in Boulder City and divided the telephone numbers associated with those residences into lists of 100 that were “assigned to wonderful volunteers.”

Those who called the residents were given a script, noting they were calling on behalf of the city and wanted to check in to see how they were doing and give them a place to get questions answered.

“I wanted them to have a phone number if they had questions or concerns with COVID-19,” Mays said.

“We weren’t supposed to say who we are, but I have a recognizable voice,” Hoskins said, noting that many were surprised that a councilwoman would be calling them.

She said she volunteered because “whenever there is a need I try to be there.”

Hoskins added that she made many new friends while making her calls and several “opened up with their problems.”

“It made them feel better,” she said.

For Boulder City resident Kelley Gray, who made around 500 calls, helping others is nothing new.

A nurse at outpatient surgery centers, Gray has been volunteering in one way or another most of her life and said she knew there was something she could do to help while she wasn’t working.

“Most people were doing well. A few were frustrated because they were unemployed and there was no money coming in.”

Part of her script was to tell residents where they could get help, including at Emergency Aid of Boulder City and how to get free meals for school-age children, which was especially helpful during the first couple of weeks of the stay-at-home order.

She admits there were some people who hung up on her, but most were appreciative, “genuinely thankful and surprised.”

“Overall, I was really impressed that people were doing well.”

“The one thing that made me smile when you were calling — once they realized you were a live person and not a machine — they were amazed that someone would call them and check on them,” she said.

A few people were even out of state for the summer but were called because they have a home in Boulder City. Gray said they told her that was one of the things they loved about Boulder City, that the city cared enough to call its residents.

It’s the same reason Gray herself moved to the community in 1997.

“People look out for each other.”

In addition to making calls on behalf of the city, Gray has volunteered to work at the Senior Center of Boulder City, manning the reception desk and calling senior citizens to check in on them.

“We were very specific in what we could take and residents have followed that very carefully,” she said. “Many times, these items were coming directly from a store rather than their pantries.”

LaPlante said there was virtually no cost involved with the program. Volunteers used their own phones and time to make the calls and staff spent only 10 minutes or so to create the script and one page of resources for them to use.