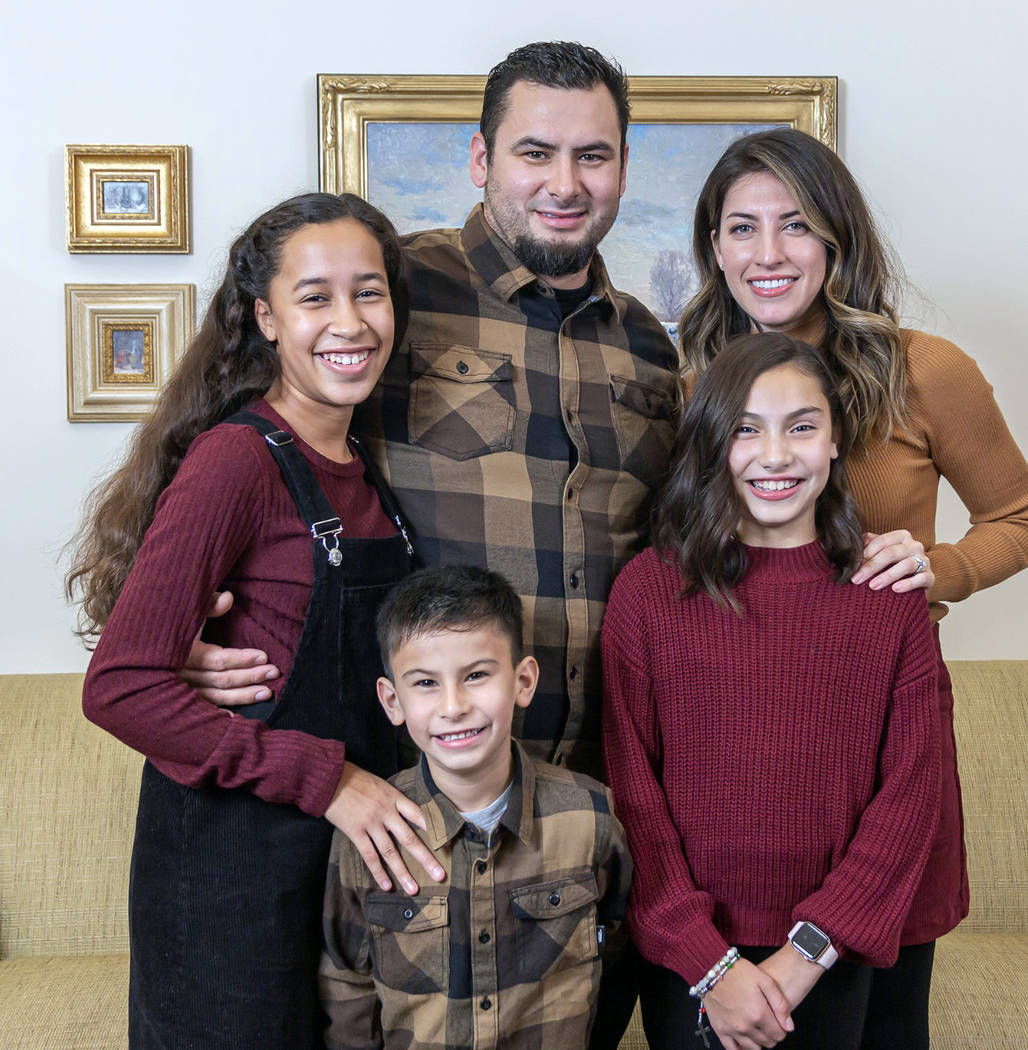 Marissa Giamanco The Boulder City community has rallied around the Giamanco family, in front, from left, Preston, Emilee, in back, from left, Natalee, Joe and Marissa, as Emilee fights an aggressive form of brain cancer.

The community’s support has helped buoy a local family’s hope as it fights its toughest battle yet.

Late last year, 10-year-old Emilee Giamanco was diagnosed with an aggressive form of cancer after a mass was discovered in her brain stem.

“The doctors wrote it off as vertigo,” said her dad, Joe Giamanco.

He said she had been having migraines and nausea as well as throwing up everything. Her symptoms did not go away, so her parents took her to another doctor, who said it was an ear infection and prescribed her an antibiotic.

“We were stressing out. … It was getting worse,” he said.

After she finished the antibiotics, the symptoms were still there, so on Nov. 8 Emilee had an MRI, which showed the mass. Joe Giamanco said they rushed her to Sunrise Hospital that same day, and she was then flown to Primary Children’s Hospital in Salt Lake City because the treatment she needed is not available in Las Vegas.

Once there, the doctors determined that she had diffuse intrinsic pontine glioma(DIPG), a tumor in the middle of the brain stem. More tests showed that the cancer had spread to her spine and another part of her brain.

The only treatment for DIPG is radiation, which Emilee started Nov. 25. It ended today, Jan. 9.

Since the diagnosis, Boulder City has rallied around the Giamanco family by encouraging them, holding fundraisers and making them feel at home despite being a state away.

“It just blows me away how many people in Boulder City I don’t know … are helping my family and Emilee,” said Joe Giamanco. “It’s amazing what community really is. … We’re seeing all these people come together as one and help our family. … It’s just hope.”

King and Mitchell elementary schools have held fundraisers to help the Giamanco family.

Mitchell Principal Ben Day said the school did a coin drive and a pajama day. Students paid $2 and could wear pajamas to school. All the proceeds from both went to the family.

King Principal Anthony Gelsone said they also did a pajama day and were organizing a coin drive. The school, along with some local businesses, also sold rubber bracelets to raise money. Emilee was a student at King before her diagnosis.

Marissa Giamanco said Emilee has been handling the radiation well, but it had to be “boosted” a little bit in December. Emilee said the treatment isn’t that bad and that it just makes her tired.

Her mom also said she’s been having a hard time losing her hair but is remaining positive.

“She’s not shaving her head,” Marissa Giamanco said. “She will keep her hair as long as it’s there.”

Despite the treatment and difficulties of being away from their family and friends, the Giamancos said they are making the best of being in Utah.

“She loves it up in Salt Lake with the snow,” Joe Giamanco said. “She plays in it every day. She’s still the same kid … and handling it very well.”

Marissa Giamanco also said their two other children, Natalee and Preston, have enjoyed the snow and are adjusting to life in another state.

Joe and Marissa Giamanco said they are hopeful Emilee will beat this disease.

“There’s something different about Emilee. … We have to hold on to that,” he said. “At the end of the day, her body is strong and dealing with this the way no one else has.”

Now that her radiation is completed, doctors and the family are deciding the next step in her treatment.

For updates on Emilee, go to http://www.gofundme.com/f/hope-for-emilee.