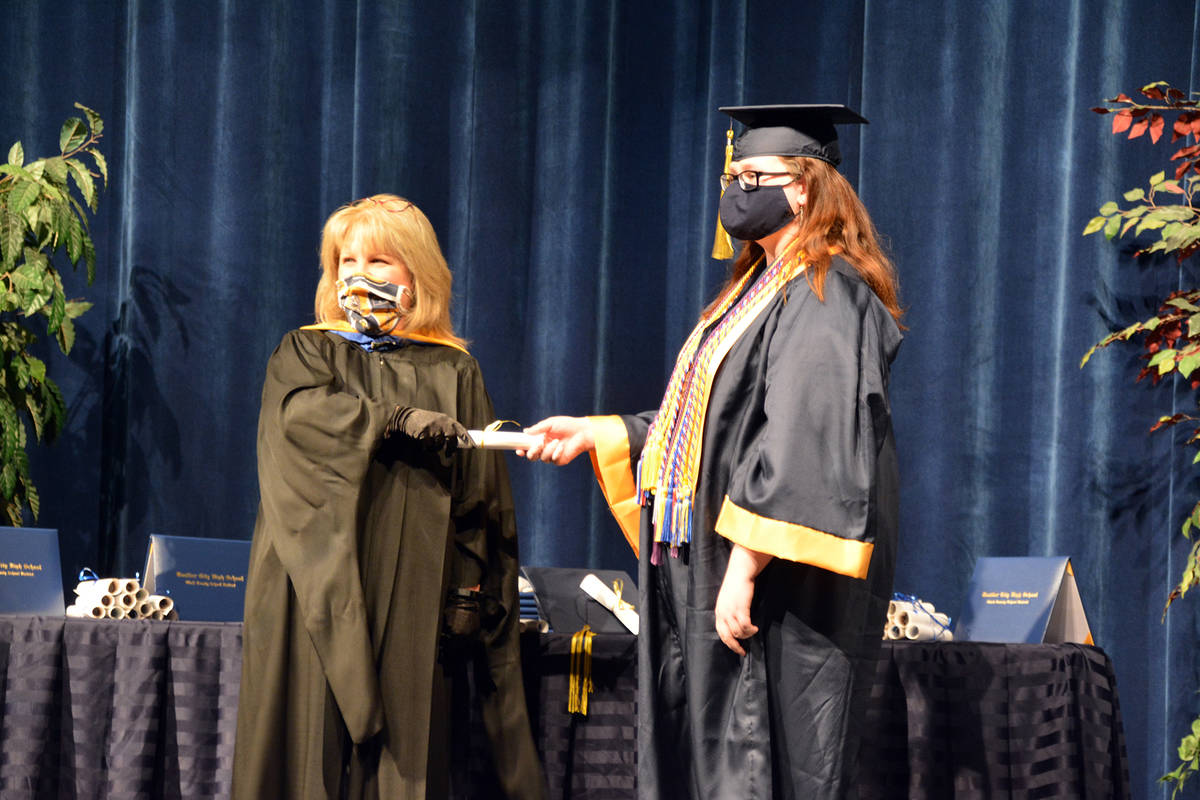 Celia Shortt Goodyear/Boulder City Review Boulder City High School Principal Amy Wagner, left, presents a diploma to Valedictorian Angelina Evans on Tuesday, July 28, 2020, during a special graduation ceremony in the school's theater. The ceremony was one of many held on Tuesday and Wednesday to honor the class of 2020.

Boulder City High School’s Class of 2020 was finally able to celebrate graduation even though the commencement ceremony was different than ones in the past.

On Tuesday and Wednesday, Principal Amy Wagner, Asst. Principal Daphne Bronson and Asst. Principal T.J. Steckelberg held numerous ceremonies in the school’s lecture hall and theater with groups of 10 graduates and their guests.

Each ceremony was capped at 50 people to follow state guidelines. They also included a live speech by Wagner and recorded speeches from the student body president, the valedictorians and the salutatorian. The graduates were also called to the stage to receive their diplomas and to shake hands with Wagner.

“We tried to make it as much like a regular graduation as possible, just without a large group of people,” said Wagner.

Parents Andrew and Rachelle Huxford said they both appreciated the opportunity to celebrate their son, Boen Huxford’s, graduation.

“I thought it was fantastic,” said Rachelle Huxford.

“This smaller setting is more quiet and personable,” added Andrew Huxford. “As a parent, it was nice.”

Cheryl Herr said she thought school did a “great job” in terms of having the ceremony with the current limitations.

“It was good to have something,” she said. “We had the opportunity to celebrate their success.”

Herr’s daughter, Raegan Herr, was the student body president and a member of the Class of 2020.

During the ceremony, Raegan Herr praised her classmates for how they’ve handled the unforeseen circumstances and challenges during their senior year.

She said these tribulations have led them to this point where they are closing a large chapter of their lives and moving on to a new one.

Salutatorian Makenna Arboreen also praised her classmates for the teamwork they’ve experienced and learned while they’ve been in school.

“Now is the time to take what we’ve learned and show it to others,” she said.

Valedictorian Boen Huxford said he was “gladly surprised” to be able to give his speech at a graduation ceremony. He encouraged his classmates to learn from the unique experiences of the year. He also told the underclassmen to not take their senior year for granted.

Valedictorian Sophia Morris encouraged her classmates to find joy and happiness in everything, whether a good or bad situation.

“If our hardships have shown us anything at all, it’s that we are a community,” said Valedictorian Angelina Evans.

Evans praised her fellow graduating seniors for how they had handled and overcome the different obstacles in the past year and said she couldn’t be happier to graduate alongside them.

“We have pushed ourselves hard,” added Valedictorian Taylor Pilkington.

Pilkington said she was thankful for the Class of 2020 and will continue to endeavor to persevere in her life. She encouraged her classmates to do the same.

Wagner also held individual ceremonies for graduates if they did not want to be there in the group or were unable to attend.