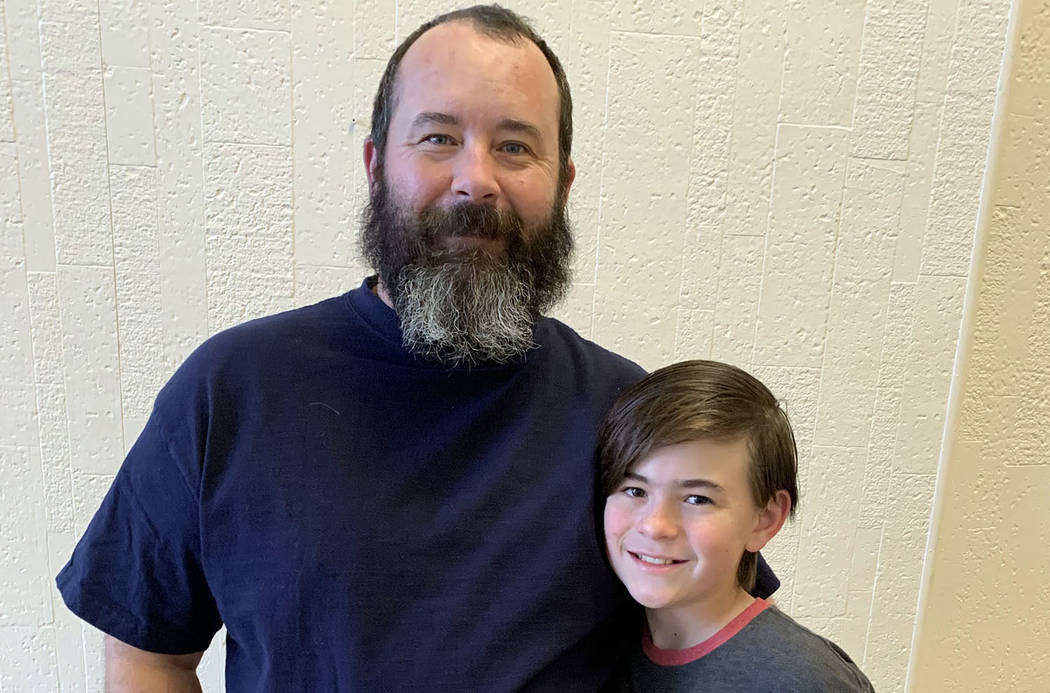 (Hali Bernstein Saylor/Boulder City Review) Ben Chapman, left, is trying to set a positive example for his son, Kyle Chapman, and has reached out on social media to be a supporting friend to anyone who needs someone to talk to.

Ben Chapman doesn’t wear a mask or a cape. He isn’t able to leap tall buildings, fly or stop bullets with his hands. He can’t travel through time to prevent catastrophic events from happening.

Chapman, a single father, wants people to know that he’s here if you need him.

He knows life isn’t easy. He has had his fair share of problems and self-doubts.

He also knows that just having a friend who will listen or a shoulder to cry on can make all the difference in the world.

So he posted this message on Facebook: “I’m going to put this out for anyone that may need it. We are all dealing with crap in our lives. However that doesn’t mean my crap is more important than your stuff. If you need to talk or feel like you are heading down a path that you can’t see your way off of, message me. I will gladly meet you for coffee to talk about anything and everything. I have been there and find myself there from time to time. Just know that you aren’t alone.”

Chapman said he was inspired to reach out after the person who resided in the other half of the duplex where he lives committed suicide and another friend posted his final goodbye on social media and said he was done living.

Chapman said his neighbor was a professional in the mental health field, whose life closely mirrored his. They had both been through nasty divorces and had exes who kept their kids away from them for a while.

“If he had that kind of finality, what chance do I have?” Chapman said was his thinking at the time.

So he devoted himself to being more positive and looking for the good things life had to offer. He said it’s not always easy and he still has his dark days, but he’s doing better.

With his engaging blue eyes, bushy beard and teddy bear demeanor, he exudes a calming charm that makes it easy to talk to him.

Chapman, who has lived in Boulder City since 2012, currently works as the graveyard shift cashier at Albertsons. He said the hours make it easier for him to spend time with his 11-year-old son, Kyle, and maintain a more stable schedule.

“I’m trying to teach my son to do better. If he puts in the work now, it will be easier down the road.”

Chapman knows this well. After he turned 18, he dropped out of high school. He bounced around a bit, was studying to become an emergency medical technician in New York and was in his second week of school on 9/11.

Then life happened. He got married, had a child and got a divorce.

Today, he works hard to give his son a happier home life — a place where he knows he is loved and can get involved in activities such as Little League and Boy Scouts.

“My son loves his life here.”

That brings a smile to his face, something he is happy to share with anyone who needs some friendly encouragement.