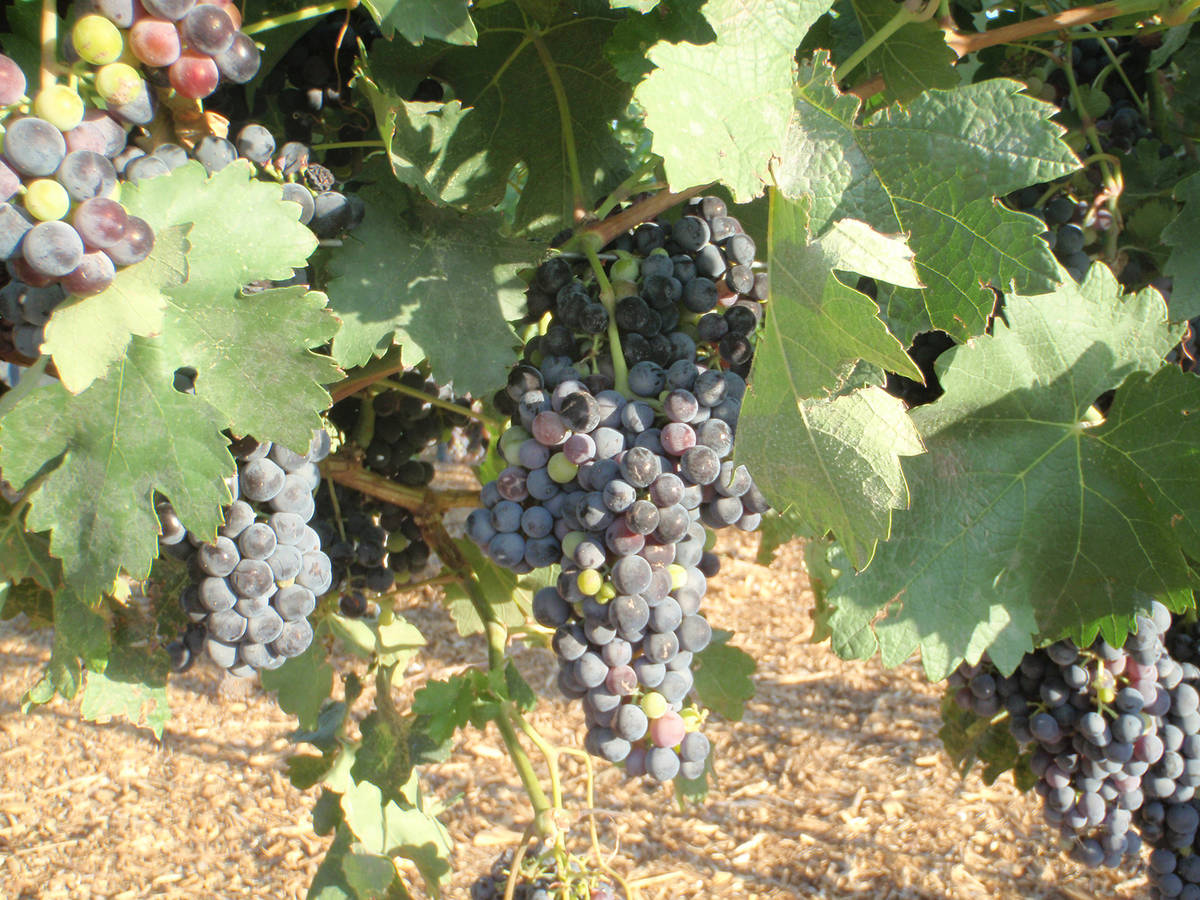 (Bob Morris) These Tempranillo grape clusters are nearly ready for harvest. They are produced under the canopy of a trellised grape vine, which helps protect them from birds. 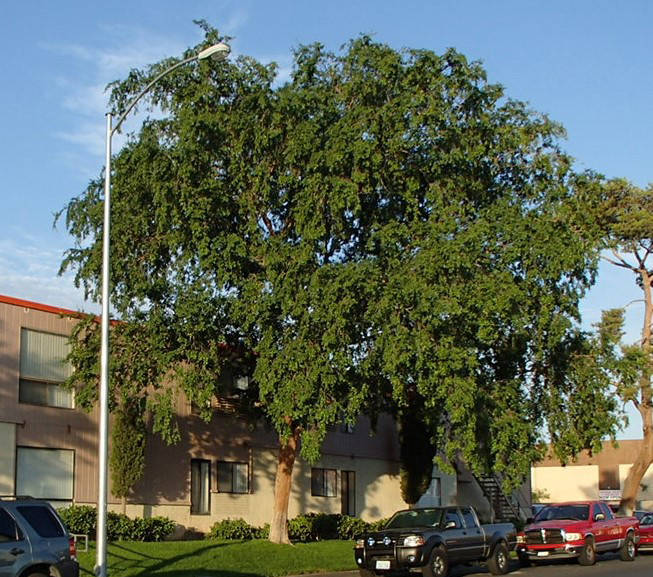 (Bob Morris) Chinese or evergreen elm trees can get large. They are best suited for parks and along streets. 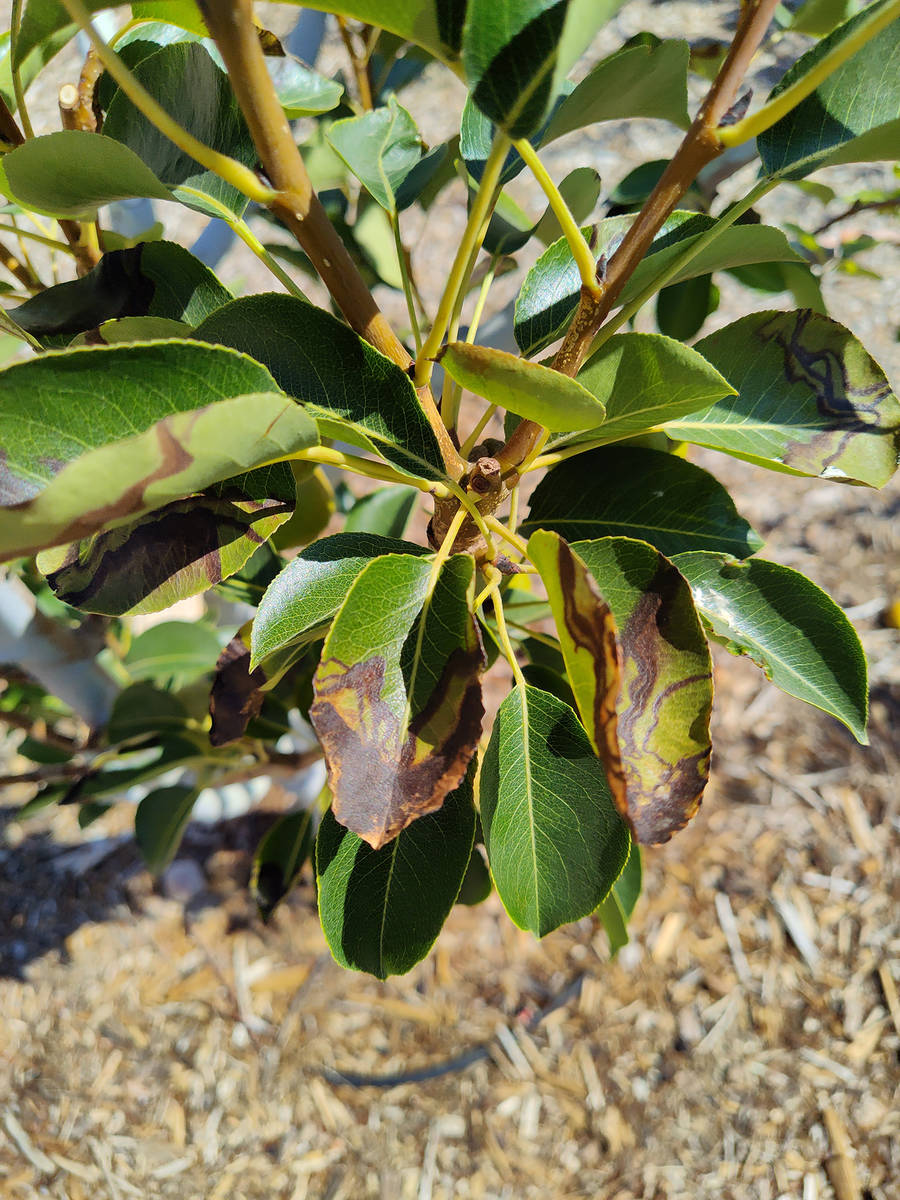 Q. Do you recommend any cactus fertilizer for the San Pedros I am growing inside my house? I repotted them in September, but they are still small.

A. Hard to say. Apply a small amount of fertilizer next watering and see what happens. Of the 13 or 14 minerals essential for plants, if any one of these minerals is in short supply it can hinder its growth. A high phosphorus fertilizer, the middle number of three, should always be included when repotting. Perhaps it was not in this case.

If it wasn’t or you’re not sure, use a water-soluble fertilizer high in phosphorus and dissolved in water for your next couple of waterings. The extra phosphorus will not hurt the plant. When phosphorus is available, it helps plants to flower and grow roots. But for new plants it’s a good idea to have it present from the start. If phosphorus is in short supply, it can cause stunting and poor growth.

Commercially, in poorer countries when cactus pads are planted, manure is added to backfill at planting time. Manure is high in phosphorus and nitrogen and rich in other minerals as well. This combination of phosphorus and nitrogen helps in the rooting of cactus pads and other cactus propagules. It’s not a bad idea to use a water-soluble fertilizer that has as many minerals in it as possible but highest in phosphorus.

San Pedro cactus are from the higher and wetter elevations of South America so they like a little bit of afternoon protection when grown outside in our more inhospitable Mojave Desert. Don’t water too often. They are still cacti and will die in soils that hold water for a long time. Water them after the soil dries. They will need lots of sunlight for faster and healthy growth. You might try putting them outside during the summertime if you think they are not getting enough light.

Q. My grapevine produced many grape berries growing in large clusters. I notice that birds are now helping themselves daily to the berries. I once saw a picture of someone using brown paper sandwich bags to cover or encase these fruit clusters to protect them from critters and the weather.

A. There is some evidence that bagging can affect the quality of grapes if they are bagged too early. Bird netting is a better solution for protecting grapes but may be a problem for birds. Make sure it is bird damage. Birds peck and leave behind damaged berries. Grapes are considered a “non-climacteric” fruit; they don’t get any sweeter after they are picked.

Personally, I like to grow grapes and produce berry clusters in the shade of the vine. This requires trellising and support of the vines so the berry clusters hang. This helps prevent sun damage to the grape clusters and birds have a hard time roosting and devouring the berries. I have had problems with ground squirrels stealing entire berries when they ripen, though.

If you are using a refractometer to judge when to harvest, the increase in sugar content occurs at the rate of 1 percent every two to three days in the summer. If you decide to use bags, mark your calendar so you know the approximate time to pick them.

If you are going to bag your grapes, I would not use plastic bags but white lunch bags instead of brown paper bags. The white bags are cooler than the brown bags and they spread light around better inside. Delay bagging your grapes as long as possible or until they start to show signs of color (veraison) or the first sign of bird damage, whichever comes first.

Q. I planted a true Chinese elm (not Siberian elm), which I purchased for shade in my front yard from a local box store last October. It was late and the leaves dropped soon after I bought it. This year the tree grew new leaves, which were small compared to last year’s. If I scratch the trunk or branches the tree is still green though.

A. First off, Chinese elm is a good choice for our desert, but it is a big tree and considered “mesic.” It’s different from Siberian elm, which is considered a trash tree and used to be commonly found in the valley. Chinese elm handles lawns or poor soils well and may even thrive growing surrounded by rock mulch. It is a tough tree. There are several varieties of Chinese elm with different improved characteristics so pick a variety when possible.

But it will grow to 50 or 60 feet when fully mature if it has access to water. It’s considered a fast-growing tree. I would not recommend it for home landscapes, even if you have a two-story home, because it is so big. Because it is a large tree it will use a lot of water when it’s fully mature, perhaps as much is 400 gallons per day all through June, July and August, in about 30 years. Even though it is called “Evergreen elm,” it is winter deciduous so dropping its leaves in the winter would be normal in our cold desert.

Secondly, when a plant is grown in a mild climate but sold in a different climate where there is more intense sunlight and higher temperatures, the leaves will decrease in size and get thicker or “tougher.” I don’t know which nursery grew this tree originally but if it was in a mild climate, perhaps even grown under shade cloth, then it would produce larger leaves but have smaller leaves the year after planting. So please take that into consideration.

Because it will be a large tree as it matures, wet the soil to a depth of 3 feet each time you water. Watering deep encourages deeper rooting and better stability for a larger tree.

Q. I have a pear tree whose leaves yellow and then die and turn black at the margins or the tips. The black color works its way inward from the margins toward the center of the leaf, or from the leaf apex toward the petiole in a wavy pattern. I am suspecting possible Fireblight disease. I have not seen the shepherd’s hook at the stem tips or black coloring on the bark.

A. The black you are seeing on the edges of leaves is not from a disease called Fireblight but rather leaf scorch. Leaf scorch in pear, unlike other fruit trees, causes the leaf edges to be crunchy black instead of crunchy brown. When you see Fireblight disease a few times, you will see the difference.

Pear trees are out of their climate comfort zone during hot, dry summers in Las Vegas. Like most plants they grow best between 55 F to 85 F, but above 85 F they struggle because of the heat.

Just like humans, healthy plants are better able to adjust to the heat, show fewer symptoms, like blackened leaves from leaf scorch, than unhealthy plants. The yellowing of the leaves tells me it’s not healthy. Early next year (January-March) apply an iron chelate (EDDHA iron chelate works the best) to the soil around the tree and make sure you water it so you can’t see it anymore.

Make sure your trees are getting enough water when it is hot. Do not apply water every day. When watering and they are young and about 5-6 feet tall they should be getting about 10-15 gallons of water three times a week. Make sure the water is applied under the tree to at least half of its canopy but starting 12 inches from the trunk. This means as the tree gets bigger and wider, the amount of water applied increases and applied to a larger area under the tree canopy (add more emitters).