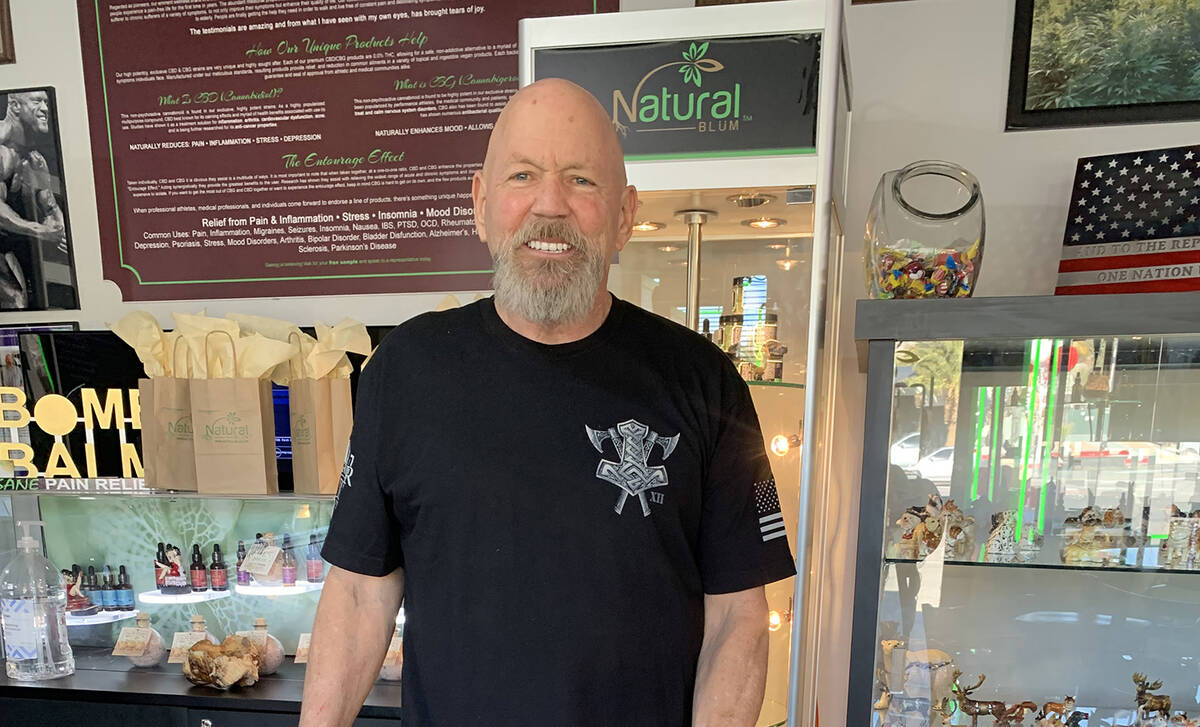 (Hali Bernstein Saylor/Boulder City Review) Curt Gebers is owner of Natural Blüm at 501 Nevada Way, Suite 5. The store specializes in wellness products using cannabigerol that he grows on his farm in Oregon.

Gebers, owner of Natural Blüm in Boulder City, said he had been living in Northern Oregon along the Columbia River.

“It was so gloomy so I bought a place in Southern Oregon,” he said.

His new home, a 13-acre parcel in a conservation and recreation area along the Applegate River, was prime land for farming. It was near several award-winning wineries and luxury food and gift basket purveyor Harry & David’s orchard. Gebers calls it the “Mecca of the world.”

He said he briefly considered growing wine grapes but there’s ”no money in grapes. Instead, he wanted to focus on people’s health and wellness.

His timing coincided with the legalization of cannabis, which was being grown on neighboring farms. Gebers began growing the plants and harvesting them at a young age to take advantage of the cannabigerol or CBG it contained.

Natural Blüm products feature a blend of CBD and CBG and contain no THC, the chemical that causes the high associated with marijuana. They include a balm made with 12 essential oils, tinctures, bath bombs and salts, and edible gummies.

According to Gebers, his gummies, available in around 35 flavors, help reduce stress, anxiety and tension while providing a sense of calm.

He said he wasn’t interested in growing the plants for people to smoke.

“I wanted to do something to alleviate pain and change lives one person at a time.”

Already into health and wellness, he said he felt using the cannabis he grows for relief was the best opportunity for him.

“I fine tuned it until I got where we are today.”

The result, he said, are products that are superior to others on the market.

Being the best at something is not new to Gebers. He said he has an “inner drive to be the best. It compels me.”

That same drive was behind his success as a breeder and competitor of championship Cane Corso dogs.

He has bred, raised and shown four national champions as well as won numerous other awards for his dogs.

He is one of seven experts on the breed for the American Kennel Club, mentors its judges and has been recognized as a breeder of merit.

Though his puppies from Red Rock Canyon Cane Corso were in demand, Gebers said he very rarely breeds his dogs anymore and only friends get the puppies. He said he has 2,500 people on a waiting list.

Gebers also has owned and operated a tax business in Las Vegas since 2003.

For now, though, most of his focus is on Natural Blüm.

“It was scary to open a new business, but I believe in what I have.”

He opened the Boulder City location July 2 and said he has grown his business 20 percent each week since then.

Gebers said the business has been doing so well he’s already opening two more locations and there is the possibility of national and international distribution.

“Clients will break down in tears,” he said as they tell him they are pain free for the first time in years after using his products.

He said it was Boulder City’s small-town charm that convinced him to open his Natural Blüm store in the community.

Editor’s note: Business at Home is an occasional series that offers a glimpse into the personal lives of local business owners.