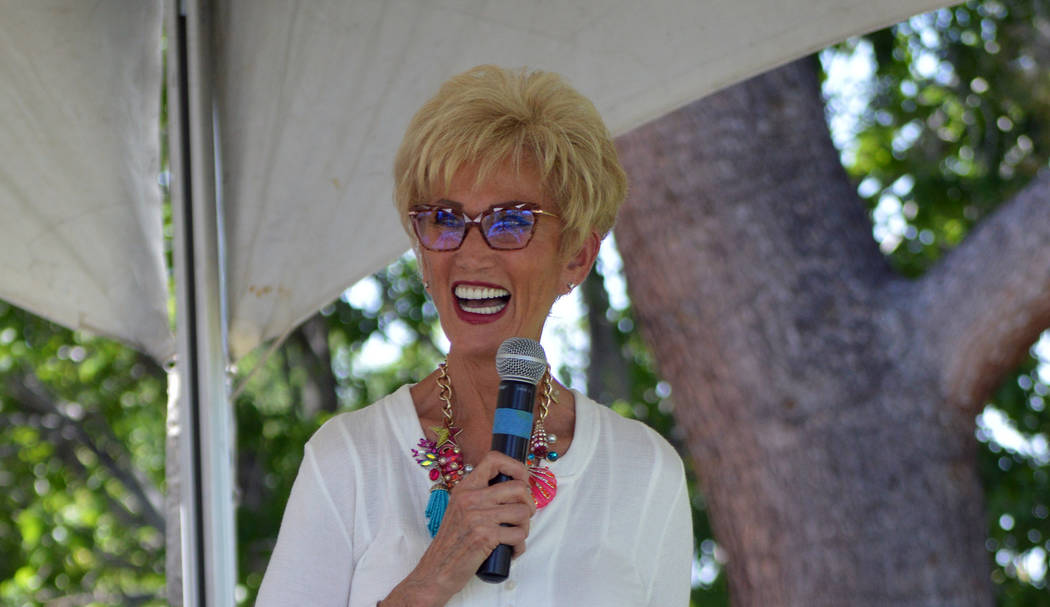 (Celia Shortt Goodyear/Boulder City Review) Cokie Booth announces a winner during Bark in the Park and the recent 42nd annual Spring Jamboree in Bicentennial Park. The dog show is one of the many ways she is involved with the community in her spare time.

Giving in small ways that can have a big impact; that’s what longtime resident and business owner Cokie Booth does in her spare time.

“I like to do things you don’t get noticed for,” she said. “I try to do the little things when I see something, like if someone needs groceries or clothes. … A lot of people need a little something here and there.”

Booth has lived in Boulder City for 30 years. She has owned BC Real Estate for 14 years and is known around town for selling homes, her love of the community and her love of animals. She’s also involved with the Boulder City Chamber of Commerce, the Community Club of Boulder City and the Planning Commission.

One of the ways she gives back is through Bark in the Park at Spring Jamboree, the chamber’s main fundraiser.

“I do it to bring awareness about adopting from our shelter and to our dog park,” she said.

Chamber CEO Jill Rowland-Lagan said the event wouldn’t be the same without her.

“Bark in the Park has been a part of Spring Jamboree since I started with the chamber almost 18 years ago,” she said. “For as long as I can remember, Cokie Booth has led those efforts on behalf of fundraising for See Spot Run and the animals of Boulder City. Her passion of seeing the kids parade their pups around the main stage and sharing their love for animals is infectious.”

Booth is often seen around town with her fur babies, as she affectionately refers to her four dogs — Miss Lena, Mr. Pi, Archie and Mindy.

Another way Booth gives back is by serving on the Boulder City Planning Commission. She said she has been a commissioner for at least eight years and is currently serving as vice chairwoman.

“I think it’s important to be a part of your community to help with these things,” she said. “God’s blessed me, and I feel like with what I do have, I want to share and give back.”

Additionally, Booth said she was proud of the ordinances she helped put into place and the work she has done to improve homeowners’ yards.

“You can’t just throw gravel in your yard now,” she said. “A certain percentage of it has to be landscaped. I’m proud of helping that happen.”

Fellow commissioner Fritz McDonald said Booth uses her time, talents and treasures in helping the community and it’s an “absolute pleasure” working with her.

“Her reach and involvement is vast and on the Planning Commission, we get to tap into that,” he said. “It benefits the community.”

He said he also appreciates “her charismatic approach to always finding a solution.”

“She keeps everyone engaged in wanting to find the common ground,” he added. “I always like having someone like that on my team. The city of Boulder City really benefits having her on the Planning Commission.”

When she isn’t volunteering, Booth works as a broker at BC Real Estate.

Booth is married and has four children, 11 grandchildren, six great-grandchildren and four great nieces. In addition to her fur babies, she had one bird.