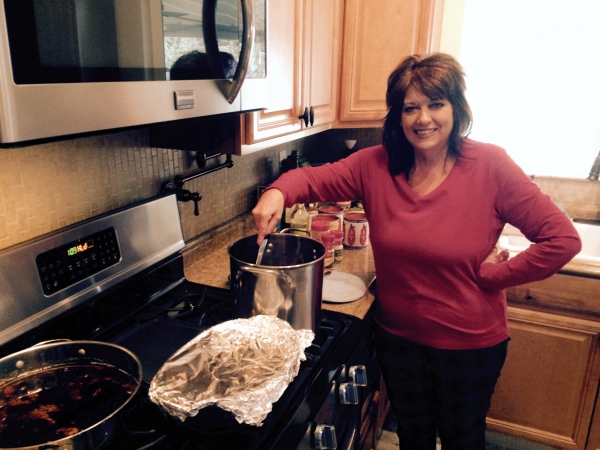 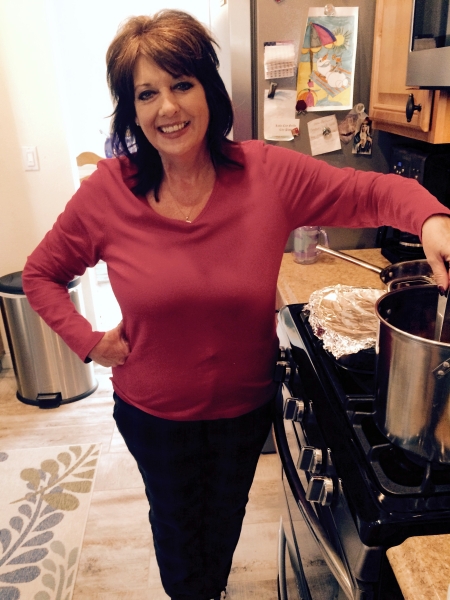 When you walk in the front door of Janice and Jim Giannosa’s home you are met by love.

Coco and Lucky, the family dogs, must check you out and offer ears to be scratched while frantically wagging their tails. Coco was rescued by friends and passed over to Janice Giannosa. After being in four homes in nine months, Coco found a forever home.

They are Giannosa’s friends, and they adore her. Never more than a few feet away, they hope that she will share some of the wonderful Italian dishes she prepares in her comfortable kitchen.

The other “angel” in Giannosa’s life is her husband, Jim.

“I fell in love with Jim on our first date, and he said that he called friends and told them he had found his future bride,” Giannosa said.

“My dad, Vince Bruttomesso, was a fighter pilot in the Air Force, and I was born in Okinawa,” Giannosa said. “When I was 2, we moved to Nevada, to Nellis Air Force Base, where he retired, and I have stayed here the rest of my life. My dad became a property developer and built some major projects around the (Las Vegas) Valley, and that is where I met Jim. We built the Magnusson Center on East Flamingo (Road) in Las Vegas, and I started out sweeping and cleaning. Dad figured I wouldn’t last six months. So after nine months I got to answer the phones and stuff. It was a huge building, but my dad was determined that I would be a regular employee and not just the boss’s daughter. I worked my way up and eventually became a property manager.”

Growing up in Las Vegas was a unique experience for Giannosa. She attended Western High School and moved on to UNLV, where she received degrees in criminal justice and sociology.

“I wanted to be a child advocate but instead I ended up being a substitute teacher, mostly at Boulder City High School and Garrett Middle School,” Giannosa said.

“I was always into horses and animals, and Jim was from Chicago with no horse experience at all. He embraced the ‘horse lifestyle,’ and we were soon riding our friends’ horses in Boulder City. For my birthday in 1995 or ’96, we went out for a ride and Jim asked me to try this new horse, Tinkerbell. Again it was love at first sight, and at the end of the ride, he said Tinkerbell was mine for my birthday present,” Giannosa said. “Six months later Jim rescued Red, and then he got into search and rescue and then team roping and even got a mustang. At one time we had five.

“When we got Tinkerbell, we decided it was best to move to Boulder City and we have just loved it here. It was the best thing we’ve ever done — moving to Boulder City,” she said.

Giannosa compares her mother to June Cleaver of “Leave It to Beaver” fame.

“She was always perfectly made up and never allowed anyone in her kitchen. When I told my dad I wanted to learn to cook, he started taking mom out on Wednesday date nights. That way I could practice on my brother, poor guy.”

Her mother never allowed Gianossa to cook or do anything in the kitchen, and she secretly went through her mom’s cookbook and taught herself to cook.

In 2006, while riding her beloved Tinkerbell, Giannosa fell from her horse and was injured. She was diagnosed with Chiari One Malformation, a structural defect in the brain that affects balance and was confined to a walker and suffered severe brain and spinal complications. The illness kept her from pursuing her time with horses, and Jim recently sold their barn and placed all of their horses with friends.

In 2014, Giannosa was able to stop using her walker and is able once again to pursue her love of cooking great food and sharing with friends and family the delicious meals she prepares.

Heat a large, deep skillet with about 1 inch of vegetable oil over medium-high heat (a deep fryer works too).

Dip bite-size cauliflower pieces into beaten eggs. Then, in a large shallow bowl, generously roll and coat the cauliflower with the bread crumb/panko mixture, making sure the tops, sides and crevices are all covered.

Place the cauliflower into the oil and allow oil to soak into the bread crumbs, being careful not to turn them too quickly. Cook until golden brown on all sides.

Remove cauliflower from skillet using a folk and place on paper towels to drain. Gently pat down tops with paper towel to remove excess oil.

Place cauliflower in a baking dish and sprinkle with a generous amount of grated cheese. Cover with foil and bake approximately 20-30 minutes or until a fork can be easily inserted into the cauliflower.

This makes a great appetizer or side dish.

In a large skillet, brown the veal and sausage until done, but do not overcook. The meat will cook in the sauce for several hours. Run meat through a colander to drain any fat and then transfer it into a large sauce pan, which will be used to cook and simmer your sauce.

Pour contents of the cans into your meat mixture; add wine and spices. The stove should be on medium heat. When the sauce just begins to bubble somewhat, add the baking soda. Cover the sauce and turn heat to the lowest setting. Stir occasionally.

You can add about Â¼ cup grated Romano cheese, if desired.

Cook the sauce at least 7-8 hours. It is always better the next day.

Prepare with your favorite pasta; ours is rigatoni.

2 cups cake flour; sift flour only when folding into creamed mixture, or use presifted flour

For the topping, mix together:

Spoon half of the batter into a greased and floured 10-inch tube pan. Cover with half of the topping, then repeat.

Cool completely in pan before removing.

In a 13-by-9-inch pan dump the blueberry pie filling. Be sure to cover the entire surface. Add the pineapple with the juice.

Next, sprinkle the entire box of cake mix over the pie filling and pineapple; then sprinkle the brown sugar on top of that.

Drizzle the melted butter over the top. Add the coconut and nuts.

Bake for one hour or until the coconut appears to be browning. Do not overbake.

Mix these ingredients together with a fork in a medium bowl. Sprinkle generously over the top of the cooled cobbler cake and finish with a dusting of powdered sugar. Serve directly from the baking pan.

You can substitute your choice of pie filling or fruit. You can also choose another cake mix flavor. I have tried spice cake and white cake.