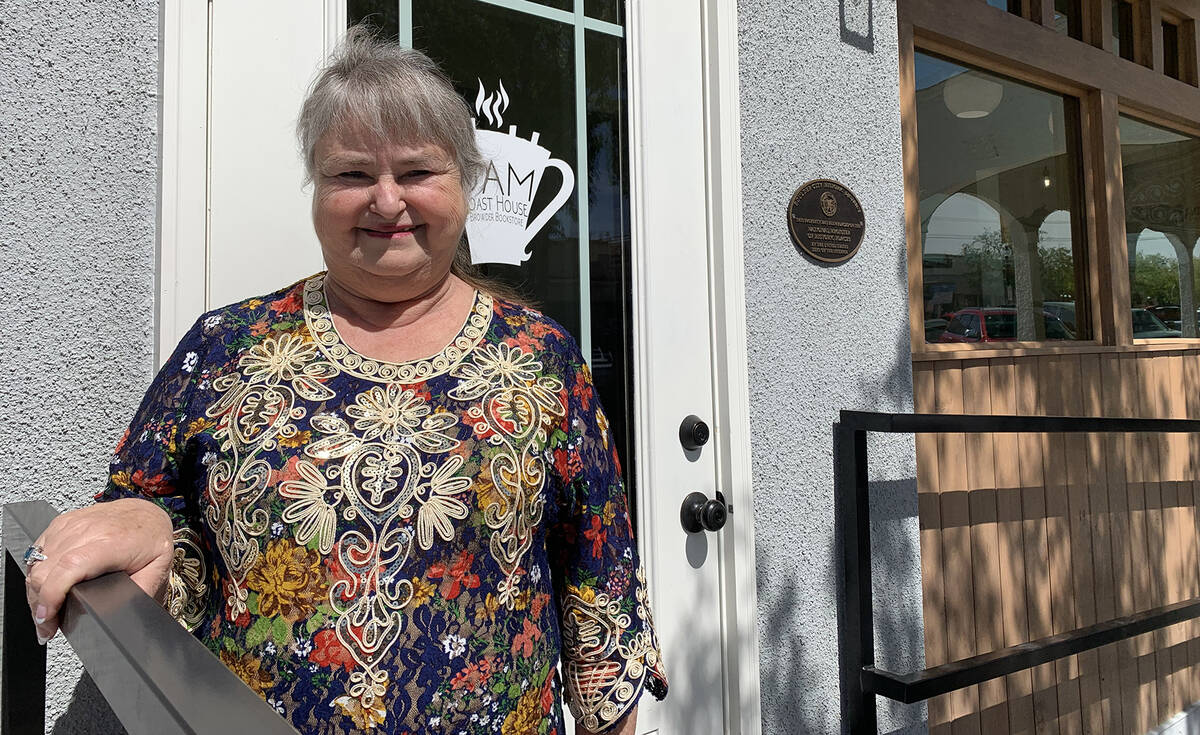 (Hali Bernstein Saylor/Boulder City Review) Linda Graham of Boulder City, pictured April 14, was recently presented with the Women in American History Award by the Silver State Chapter, Daughters of the American Revolution, for her work helping preserve the historic Browder Building and volunteer efforts in the community and other places she has lived.

As the wife of David Graham, a minister, the couple often has to move.

“My life has developed around volunteer work,” said Linda Graham. “I always choose a couple of places to volunteer. It helps me integrate, become part of the fabric of where I am.”

She was honored recently by the Silver State Chapter of the Daughters of the American Revolution for her volunteer work.

The Women in American History Award recognizes women who have given significant service to their community in various ways, according to Kay Moore, a member of the chapter based in Boulder City.

Graham follows in the footsteps of several other women who have made major contributions to Boulder City, including Ida Browder, and is the chapter’s first living recipient of the honor, Moore said.

Moore said Graham’s civic service, including serving as the chairman of the city’s Historic Preservation Committee and efforts to help preserve the Browder Building, along with volunteer work in the other communities she has lived in contributed to being selected for the honor.

Humbled by the award, Graham said she finds volunteering and helping others very rewarding. She said she also enjoys being able to make a difference in the lives of others and the communities she calls home.

Graham said when she first joined the Historic Preservation Committee about six years ago she didn’t feel city officials took their efforts seriously. She and fellow members of the group have worked diligently to show what an impact they could have on helping preserve the city’s historic properties.

They have made a difference. Although it took about two years to accomplish, she said they were able to get the exterior of the Los Angeles Department of Water and Power Building painted.

The group also prompted the city to update its 1980 report on historic properties, designate $500,000 for improvements to the old water treatment plant and pave the way for stricter regulations regarding making changes to properties within the downtown historic district.

Graham said it is essential to put restrictions on what people can do to their homes or businesses in the historic district or the “history part is at stake. Otherwise, we are just a cute little town that will lose its history.”

While being involved with the Historic Preservation Committee takes up much of her time, Graham also has volunteered with the American Legion Auxiliary, Boulder City Republican Women, Boulder City Community Club, Rotary Club of Boulder City and several women’s organizations at Grace Community Church, where her husband is pastor.

Her volunteering began in earnest in 1972 when she began teaching Sunday school and played piano for worship services at the Salvation Army Church in Monterey, California.

Since then, she has volunteered with numerous religious organizations, as well as helping with political campaigns for congressional candidates in the 1980s and 1990s; running for several government offices; serving on the school board for two terms in East Peoria, Illinois, in the 1990s; and as a Court Appointed Special Advocate for children in Santa Barbara, California, in the early 2000s.

They also have two sons, Greg and Andrew.