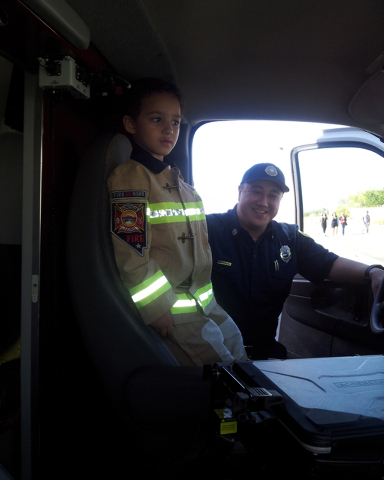 He loves firefighters and, according to his grandmother Terri Beaver, he told his mom that he wanted a fireman to come for his birthday Oct. 15.

Instead, Beaver surprised her grandson by taking him to the Boulder City Fire Department’s annual pancake breakfast Oct. 12 where he was able to live out his dream for his birthday.

“He was kind of overwhelmed at first, because he didn’t know until we got to the fire station that we were going to do that,” Beaver said. “He wouldn’t leave. He was having so much fun. The guys were really, really nice. They let him go in and out of the ambulance and everything.”

After spending three hours with numerous firefighters, Beaver said she couldn’t get her grandson away from them. She said that when he’s older, he wants to help people, but his job also has to include animals. Fortunately for Klein-Lora, he was able to see a fire dog at the station.

Now that her grandson was able to get his first look inside the fire department, Beaver said he’s narrowed down his future career choice.

“He does nothing but talk about it and how he wants to be a fireman,” she said.