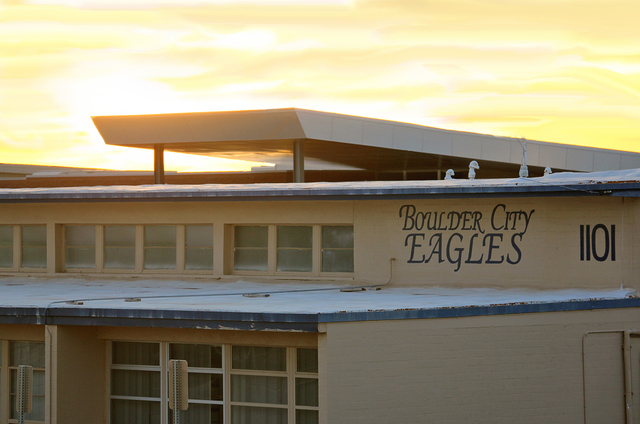 Courtesy photo This photograph of the sun rising over the old administration building at Boulder City High School is part of the calender created by the school's yearbook staff. The calendars are being used as part of a fundraiser to help Paul Dosch, who coaches the girls basketball team and is fighting stage 4 lung cancer.

Members of Boulder City High School’s yearbook staff have created a special calendar filled with photos taken to commemorate the campus’ original buildings before they were torn down to make way for modern-day facilities.

Thirteen photos of the school, which was built in the 1940s, are featured in the limited-run calendar dated for March 2017 through March 2018.

“The project was meant to simply show off the skill set of an amazing photography team in yearbook, but someone suggested instead of producing 50 calendars for family and friends, we produce 1,000 and have a freewill donation to help coach Paul Dosch,” said yearbook advisor Canaan Petersen.

“Helping to create a calendar that not only preserves the memory of the old school but aids one of the people that had made it so special has been a worthwhile experience that I wouldn’t trade for the world,” said senior Julia Davidson.

“I better appreciated what our old school was even though I had only been there for a year and a half. By taking the pictures I appreciated the memory of it more,” said sophomore Olivia Goodfellow. “It feels good to make something in honor of him to commemorate the old school that everyone knows and loves just like we love coach Dosch.”

The project was created with sponsorship from the credit union and Desert Sun Realty, Petersen said.