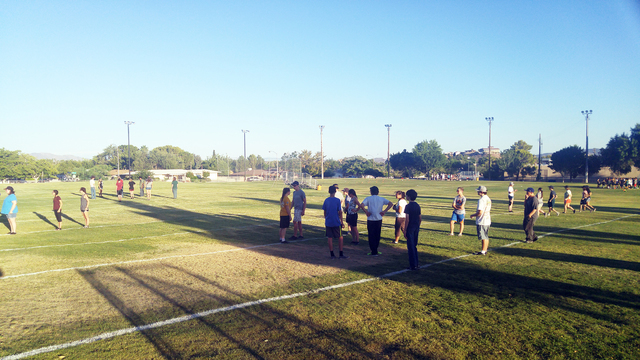 The new school year is almost here and accompanying the return of classes is the return of football, which means the Boulder City High School marching band has already begun its preseason camp to get into shape.

With the first game coming Aug. 26 against Sunrise Mountain, before classes are underway, and an incoming class of freshmen in need of basic training, it is imperative to get everyone into the practice room, out on the field and up to speed, according to James Gillette, band director.

The percussion and color guard members began practicing Aug. 8 while on Monday the rest of the band began to assemble for two weeks of grueling two-a-day practices, with four hours each afternoon performing music in the band room, followed by three hours each evening on the football field.

Once the school semester begins there will only be one evening practice per a week, so a lot of the work must be done now, Gillette said.

“It’s quick, and some of the new students may be a bit overwhelmed at first,” he said. “But our first performance will be next Wednesday for the parents, followed almost immediately by the first game. Then on Monday school will be here.”

It was so important to get everyone prepared that information was sent in the mail months ago, and while some students are otherwise occupied or out of town, most of the band is already practicing and ready to go, according to Gillette.

“The freshmen are obviously completely new and many of the rest of the students are out of practice,” Gillette said. “We wanted to make sure everyone had plenty of notice because high school is busy; these kids have a lot of responsibilities and other activities. Boulder City kids do everything.”

Senior Korbin Skordas has been in the marching band since he was a freshman and each year he has been at camp for two weeks before school gets started, though according to him, it is well worth it.

“The camp is really helpful for everyone,” Skordas said. “It gives new people a chance to figure out what’s going on and make some friends, but the most important thing is learning cooperation. If one person is off, it can throw off the entire group, so this helps us all get on the same page.”

Marching band members have has a busy schedule ahead of them as they will attempt to master their routine performing at each home football game and then their competitive season will ensue, featuring five performances around Southern Nevada between Oct. 8 and Nov. 12.