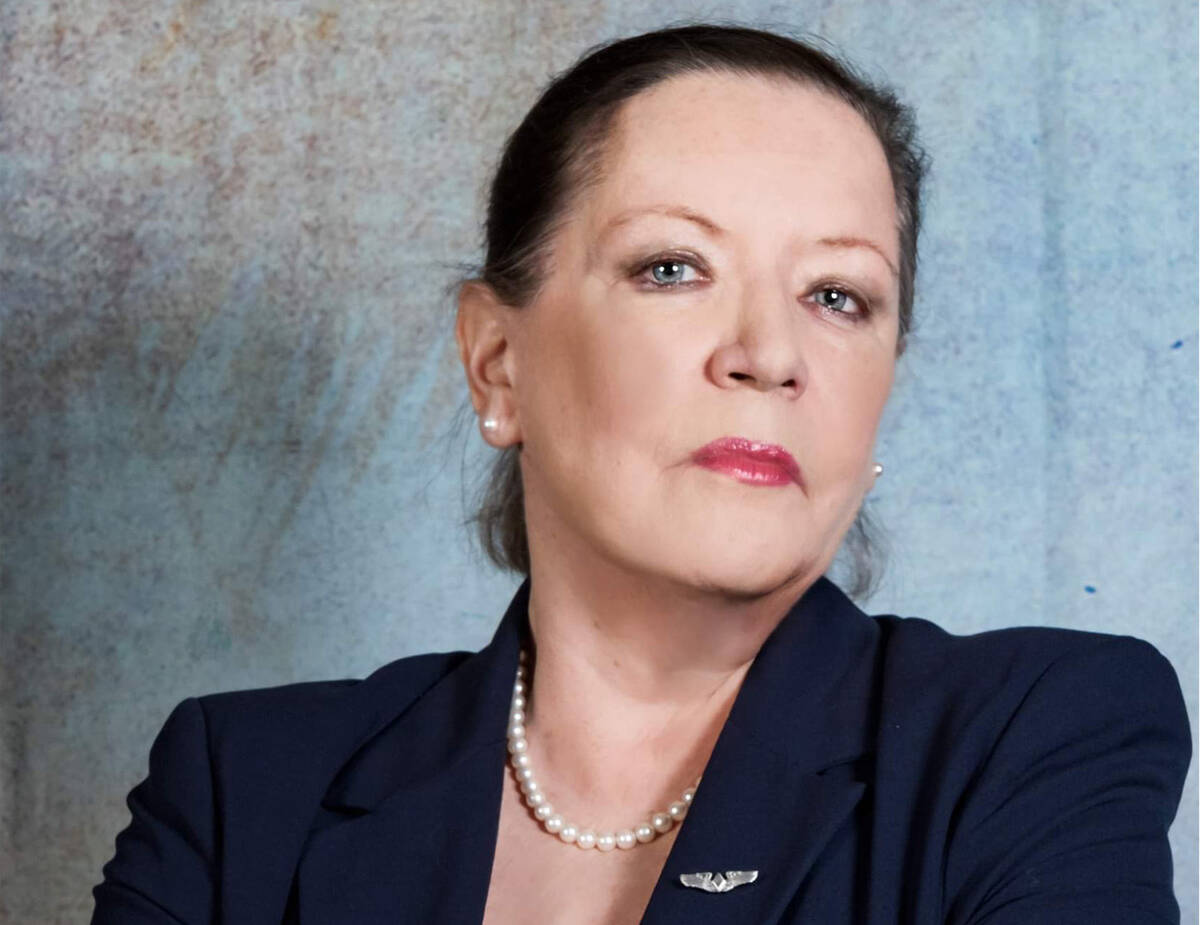 Hasty, who has been a New York-based playwright and actor most of her life, said she had been working on her play about Cochran for a while, especially during downtime through the COVID-19 pandemic, and was getting ready to have it filmed as a documentary when Ihla Crowley, one of the Boulder City Chautauqua organizers, found her.

Mishler recommended that Cochran, who was a dear friend of Yeager, would be a good complement to the program.

“Chuck Yeager was her wingman,” Hasty said of the woman who broke more aviation records than anyone — male or female — but was forgotten by history. She held records for speed, altitude and distance, as well as being the first woman to break the sound barrier and fly a bomber.

During World War II, she, along with Nancy Love, was the head of the Women Airforce Service Pilots, which had about 1,000 civilian female pilots ferrying planes from factories to port cities. She also was a sponsor of the Mercury 13 women astronaut program.

Hasty said she discovered Cochran after moving to the Florida Panhandle to be closer to her mother. Cochran was from the same town, Muscogee.

Once she began researching Cochran’s life and reading the book “Superwoman Jacqueline Cochran: Family Memories about the Famous Pilot, Patriot, Wife &Businesswoman” by Billie Pittman Ayers, her niece, and Beth Dees, she learned that “her private life was a thousand times more interesting.”

“She had a pretty red hot reputation. She had an affair with a married man 42 years older than her, married at 14, had a baby three months later, and had a shiny, hot red roadster.”

Though she was the youngest of five children, Cochran’s early humble lifestyle caused her to leave home and later claim to be an orphan. Despite this, Hasty said she took care of her family members, providing food and clothing and moving them to California when she lived there.

“The fact that I get to play this firebrand is of such joy for me,” Hasty said. “It’s a real thrill to bring her back into consciousness.”

Hasty said her performance as Cochran is so spot on that even her own family thought she was the aviator when on stage.

She said she is excited to be a part of Chautauqua after being surrounded by it much of her life. The area in New York where she lived was built by Chautauqua New Yorkers, and the performances are “near and dear” to her.

She said loves the idea of its mission of bringing culture, knowledge, recreation and religion to people.

Musical entertainment by The Lenores, The Sanfords (featuring Noah Sanford), and Steve Cottrell will start the Friday, Saturday afternoon and evening performances, respectively.

Once again, a preshow dinner is being offered before the Friday and Saturday evening performances. Dinner, at $35 per person, will be a buffet featuring chicken cordon bleu, Burgundy beef tips, salad, dessert, and a glass of wine, beer or nonalcoholic beverage.

In addition to the performances, there will be an opportunity to meet with the Chautauqua artists during a meet and greet reception on Sept. 15. A $40 donation per person is being asked.

Details about the special events are available on the group’s website, bcchautauqua.org.

Tickets are $15 per performance and may be purchased by check or cash at Ace Hardware, 541 Nevada Way; Boulder Dam Hotel, 1305 Arizona St.; and Boulder City Chamber of Commerce, 100 Nevada Way.