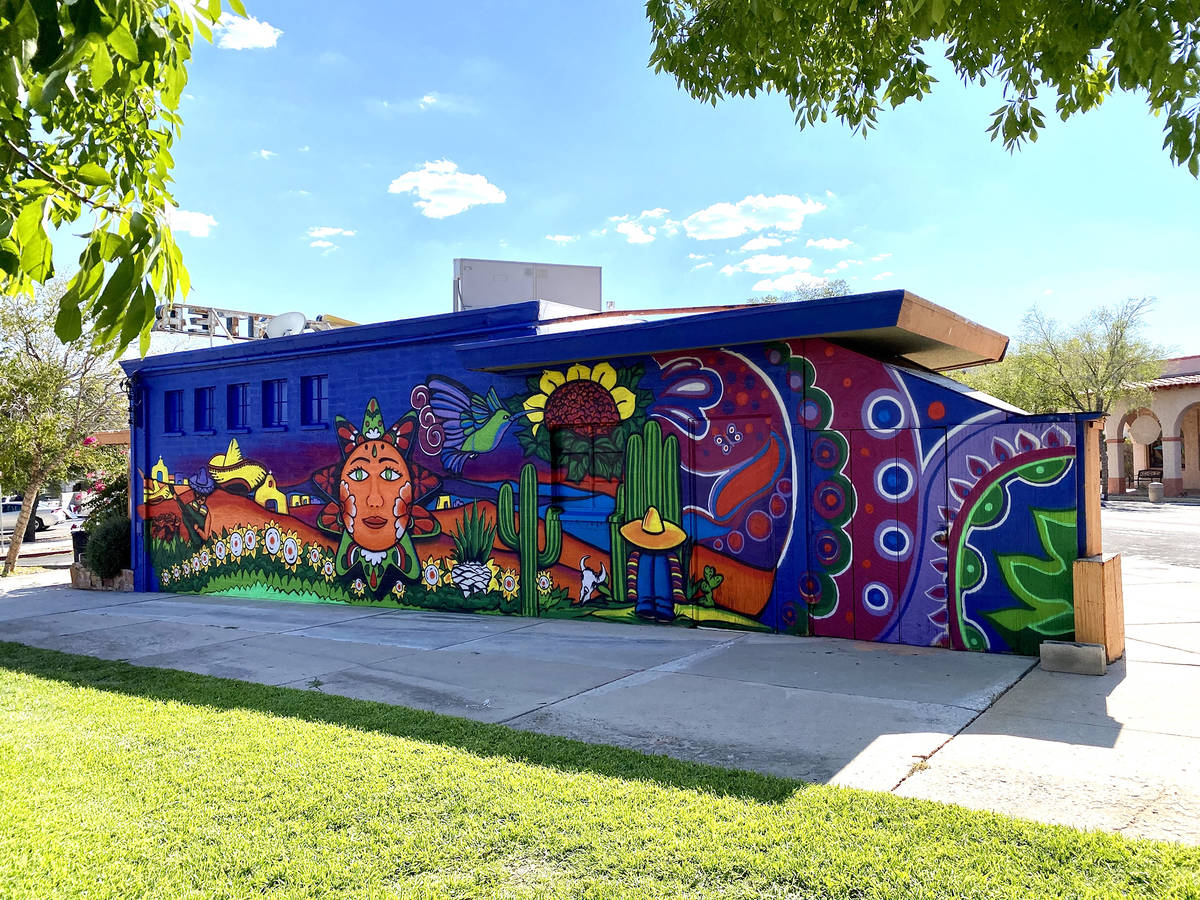 Oscar Garcia Las Vegas artist Oscar Garcia recently completed a mural in town at the Western and Mexican Store at 415 Nevada Way. His work showcases the vibrancy of Mexican culture. 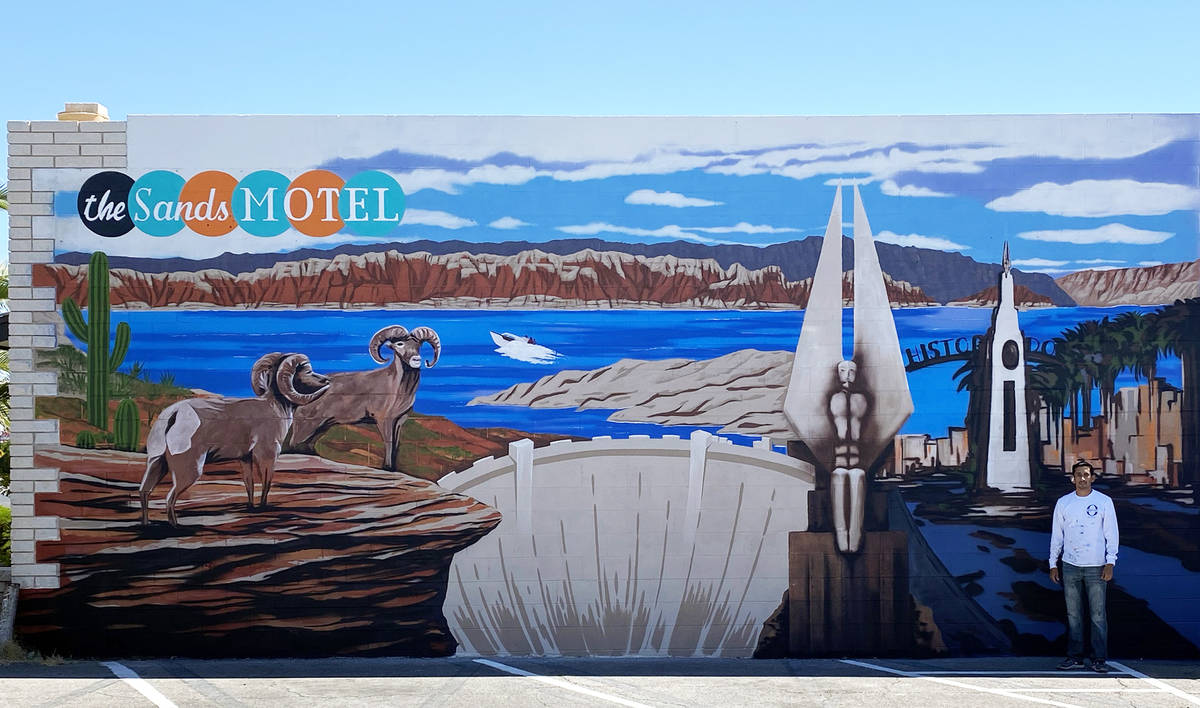 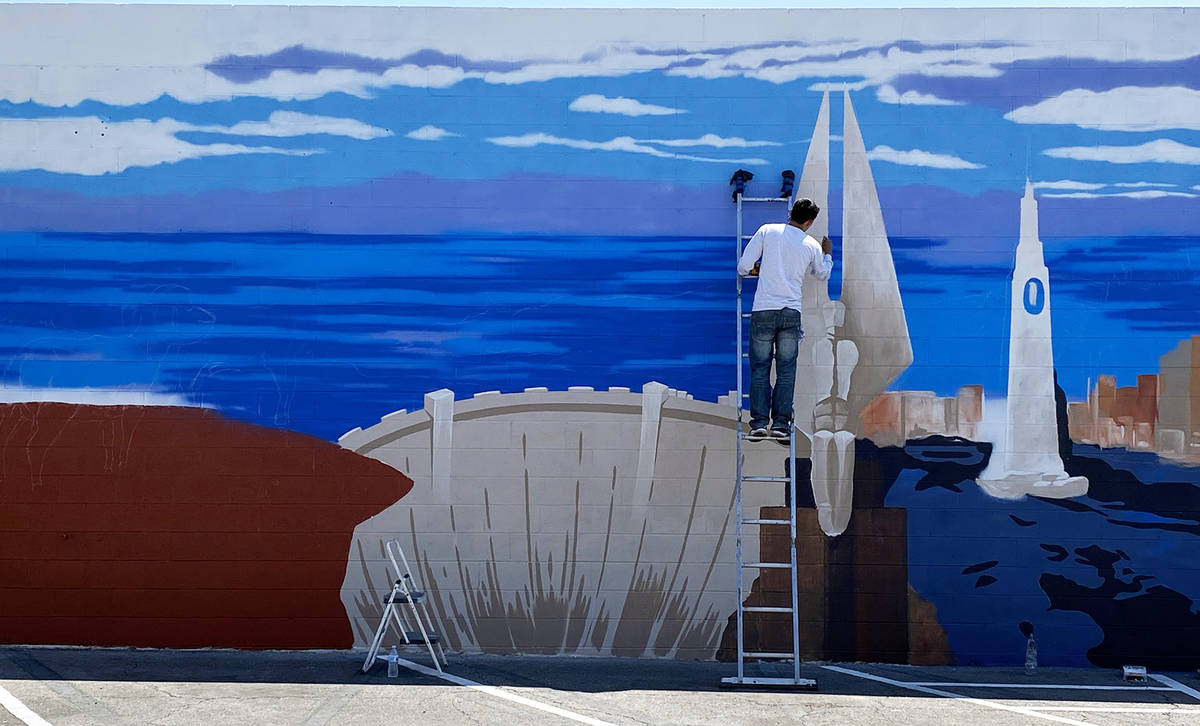 Oscar Garcia Las Vegas artist Oscar Garcia works on his recent mural for the Sands Motel, 809 Nevada Way. He said he could only work on it for a few hours a day because of how the sun would hit the surface.

A Las Vegas artist looked to Boulder City’s history to create a new mural for a longtime local business.

Oscar Garcia has been painting since he was a child in Mexico. Recently, Archie Patel, owner of the Sands Motel, 809 Nevada Way, contacted Garcia to paint a mural on the side of the business.

“I don’t know much too much about Boulder City,” Garcia said. “The owner gave me an idea and I did research on Boulder City history and went from there.”

He said he focused on the “iconic things that Boulder City has,” and his final design pays tribute to the historic downtown entrance, Hoover Dam and local wildlife.

“I gave him the ideas and he went with it,” Patel said. “He took what was in my head and drew it. I didn’t make any changes (to his design).”

Patel said she had wanted to do a mural or something on that space since she purchased the property about a year ago.

“The plain, simple wall was not working,” she said. “It looks good when you do something in that area.”

Patel said she found Garcia when she was looking for potential artists for the project and reached out to him.

“I kind of just took a leap of faith,” she said.

Garcia said the artwork took him about four days to finish. He could only work on it for a few hours in the morning because of the way the sun hit the wall.

After the Sands Motel mural was finished, Garcia designed one for another local business, the Western and Mexican Center at 415 Nevada Way.

The business is owned by Angelica Moorhead’s parents, Ramiro and Petra Gomez, who are from Mexico.

Moorhead said they had wanted to do something with the space on the outside back wall of their store, and when she saw Garcia working on the mural at the motel she contacted him.

To give him some ideas, she said she gave him examples of other vibrant, Mexican murals.

“We wanted to do something to reflect us and our business. … He was amazing,” she said. “He did that mural for us in two days with spray (paint) cans.”

She said the only part that he used a spray gun for was part of the sky.

Garcia said he drew inspiration for the mural from the vibrant colors at the store and from Mexican culture.

“When you know your own country, you know what to do,” he said.

Moorhead said she and her family “love” Garcia’s work and have had a great response to the mural from community members.

“We like the positive of it,” she said. “We all need something positive right now.”

Garcia said he is also working on two murals for another local business.

Garcia moved to Las Vegas from Mexico in 2005 to be closer to his family.

“My entire family is here,” he said. “When you live apart from your family, you want to be together.”

Since moving to the area, Garcia said he has done approximately 500 murals for residents, companies and schools. He said he has also worked with the Clark County School District.

He and his wife live in Las Vegas with their two children.