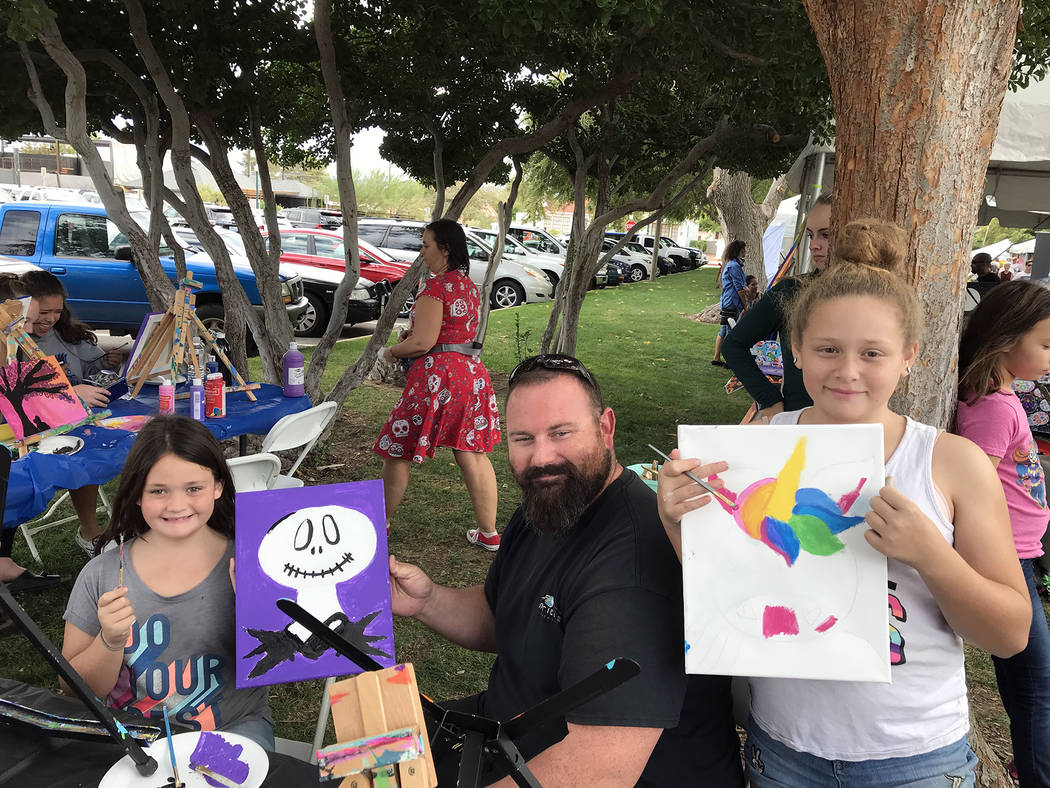 Art in the Park offers attendees the chance to create their own works. Boulder City residents Braylin Bagley, 7, from left, Paul Bagley and Mikaya Bagley, 11, display paintings they created in 2018. This year's event will be held from 9 a.m. to 5 p.m. Saturday and Sunday, Oct. 5 and 6.

The parks in downtown Boulder City will once again be transformed into an outdoor art gallery as Art in the Park returns for its 56th year.

This year’s show will feature 320 artists from across the country and one from Israel, said Wendy Adams of the Boulder City Hospital Foundation, which presents the juried show.

“Every booth is sold,” she said, noting that the foundation has a waiting list for participation.

Proceeds from Art in the Park benefit the nonprofit Boulder City Hospital.

“While the hospital provides high quality care to Boulder City residents as well as neighbors in the surrounding area, it is the only critical-access hospital in Nevada that is not supported by tax dollars, mining proceeds or a larger parent corporation,” said CEO Tom Maher.

“Funds raised through Art in the Park ensure that Boulder City and our neighbors may continue to receive personalized, hometown care that only Boulder City Hospital can provide,” Adams added

This year’s featured artist is Brenda Peo, of Saint David, Arizona. A native of Chicago, Peo grew up in the deserts of the Southwest.

A self-taught artist, she works in oils and paints animals. She said she tries to capture their curious personalities and quirky traits, working in a style she calls “realism/impressionism with a big dash of humor.”

Peo began painting in 2008, when she found that her creative spirit wasn’t being satisfied through her jewelry-making. She spent 25 years making and selling Southwestern jewelry made of copper, red brass and sterling silver. New this year will be an opportunity for children to create their own works of art to take home in a hands-on painting class. Michelle Sullivan of Mitchell Elementary School will lead the session.

In addition to the art, there will be musical entertainment, starting with opening ceremonies featuring Boulder City resident Phil Esser, and food booths.

“This year we have over 20 food vendors, which is seven more than any other year,” Adams said.

Also, there will be a raffle featuring art pieces that will benefit the hospital and foundation.

Admission to Art in the Park is free. Free parking is available in nearby lots and residential streets. Paid parking, which comes with complimentary shuttle service to the art show, will be available at Veterans’ Memorial Park, 1650 Buchanan Blvd.