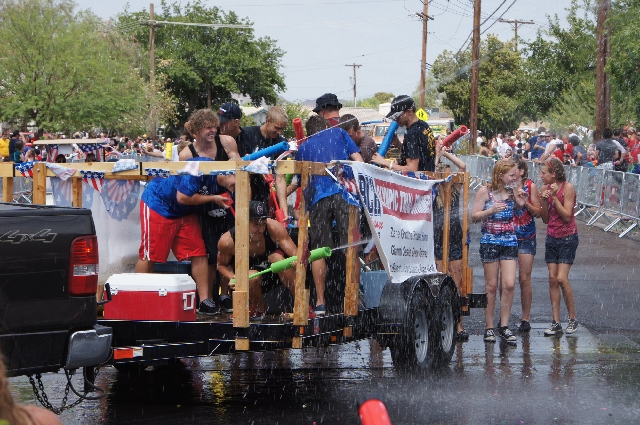 Boulder City Police will be issuing citations to people throwing water balloons at the Fourth of July parade.

Water balloons have always been banned at the parade, but last year things got really “out of hand,” Parks & Recreation Director Roger Hall said.

The use of water balloons, some frozen, and people throwing water bottles at police cars last year created a safety issue, Hall said

“It’s pretty bad; we need to rein those people in,” he said.

City Attorney Dave Olsen said balloon throwers will be cited under a provision of the Nevada Revised Statutes that deals with the throwing of “deadly missiles.”

“Even though water balloons might not be considered deadly missiles per se, they can indeed be deadly missiles … especially frozen water balloons, which is really what we are most concerned about,” Olsen said in an email. “Throwing of plastic water bottles also fits in, perhaps even better, to this statutory scheme.”

Acting Police Chief Bill Conger said in an email that balloon throwers will be cited under a city code which prevents the throwing of stones, snowballs or any “other missile or projectile” at another person or in a public place.

Boulder City resident Justin Keogh, who got “completely rained on” by water balloons while riding on the Miss Boulder City Scholarship Pageant float last year, said it’s no joke to be hit by a water balloon thrown by an adult.

“They kinda hurt,” he said.

Keogh said he is a fan of the parade’s water fight, but he thinks balloons should be banned.

“I think they should ban it because it’s not funny to be hit by one of those, but being squirted by water, that’s OK,” he said. “I ought to be one of the biggest proponents of the water fight, but I don’t want to hurt anybody.”

The water fight begins near the end of the parade, at Fifth Street and Aztec Place, and continues to Avenue B and Sixth Street, where the parade ends.

However, if the balloon ban is unsuccessful, water may be banned outright, Hall said.

“If I can’t make this happen this year, then the possibility of no water in the parade will be considered,” he said. “The big thing is if you see people throwing water balloons, you need to tell them to quit it,” Hall said.

Because of the balloon ban enforcement, and the Boston Marathon bombing in April, there will be an enhanced police presence at the parade, Hall said.

“We’re going to be going around and inspecting coolers to make sure there are no water balloons or bombs or anything,” he said.

Additionally, in the water-fight section there will be, for the first time, barricades on either side of the sidewalk keeping people out of the street and out of people’s yards.

Hall said he received a complaint from a homeowner last year because spectators were using a spigot on a house without his permission, and had trampled landscaping.

“I met with the homeowner and, with the help of Public Works, came up with a plan to barricade the area to prevent this from happening again,” Hall said.

The parade begins at 9 a.m. on Colorado Street and Nevada Way, and continues down Nevada Way before turning left at Fifth Street, and right on Avenue B.