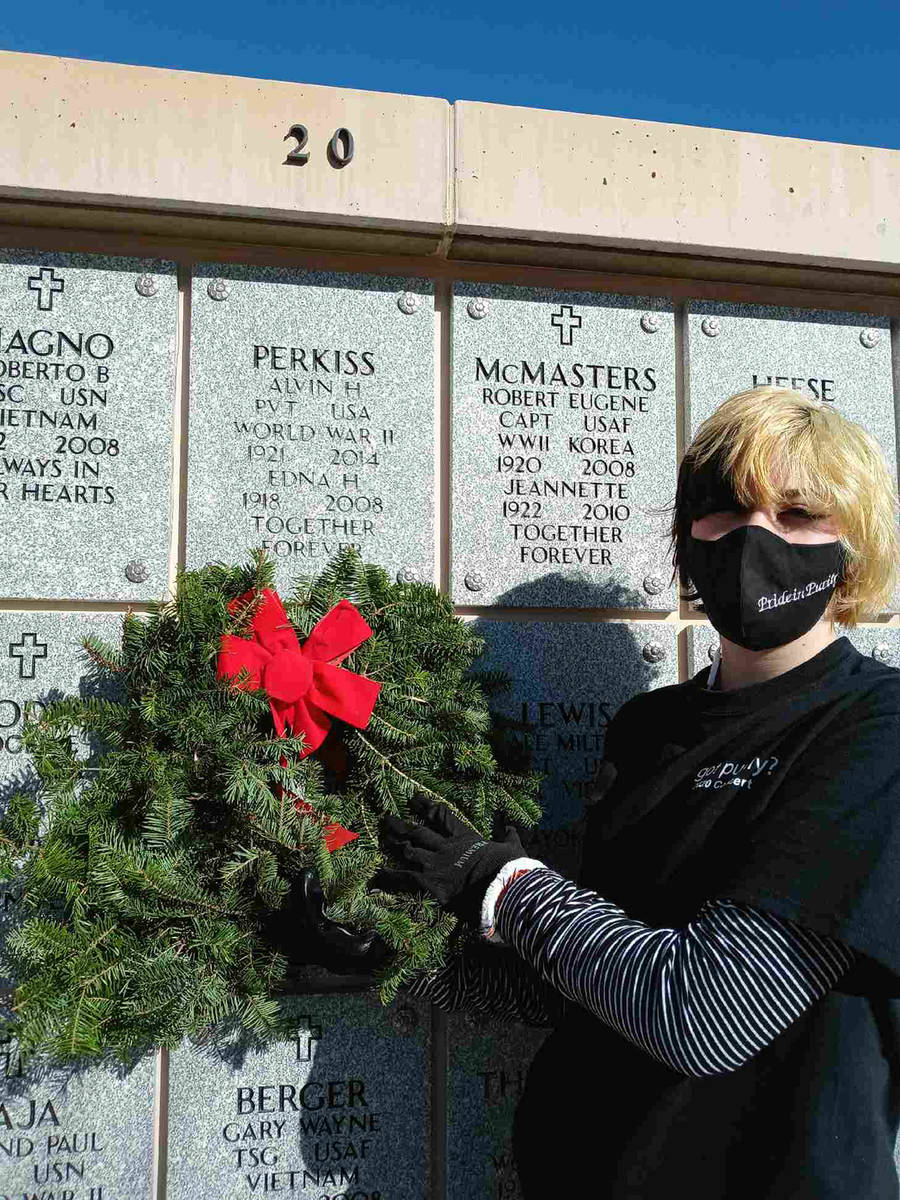 Denise Ashurst Pride in Purity volunteer Adisyn Neilson places a wreath at the final resting place of a veteran at the Southern Nevada Veterans Memorial Cemetery in Boulder City on Saturday, Dec. 19, during the annual Wreaths Across America event.

Even though this year’s local ceremony was canceled, people were still able to honor veterans by placing wreaths on graves at the Southern Nevada Veterans Memorial Cemetery in Boulder City.

Placement was part of national Wreaths Across America Day, which was observed Saturday, Dec. 19. It is part of a program that works to remember and honor veterans by having volunteers place wreaths on their graves. Usually hundreds of people in Boulder City participate, but this year only 50 people were allowed in the cemetery at a time and there was no ceremony.

Local nonprofit Pride in Purity was one of the groups allowed to have volunteers there to help.

“We at Pride in Purity were glad to hear that the Wreaths Across America organization and the White House were going to allow organizations to lay wreaths,” said founder Denise Ashurst. “And as in the past, it gives the military and civilian communities a chance to interact and honor those who served proudly our great nation and those who have helped protect other nations around the world.”

“I retired from the Air Force in 1998 and giving back to the military community is my honor, as well as introducing Pride in Purity girls to military protocols and ceremonies,” she said.

The mission of Wreaths Across America is to remember, honor and teach by nationally coordinating and carrying out these ceremonies at cemeteries across the United States, including Arlington National Cemetery.

Its theme this year was to “Be an American Worth Fighting For,” and 1.7 million wreaths were placed on veterans’ graves at 2,557 cemeteries throughout the country.

Almost 5,200 wreaths were placed at the Southern Nevada Veterans Memorial Cemetery, according to Superintendent Chris Naylor.

“We were supposed to receive 6,156 wreaths, but Wreaths Across America only sent us the 5,193 wreaths and have told us they will send the missing 963 wreaths with next year’s shipment,” he said. “With the wreaths we did receive we were able to place a wreath on every grave in burial sections J, K, AH and half of section AI.”