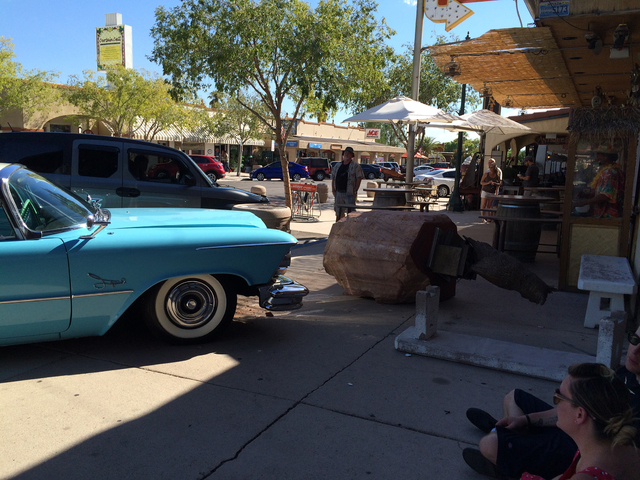 Hali Bernstein Saylor/Boulder City Review A restored 1957 Chrysler Imperial sits on the side walk on Nevada Way after the driver crashed into the "Monumental Professor" sculpture Saturday. The crash occurred as the driver was trying to avoid a disabled vehicle in the road. 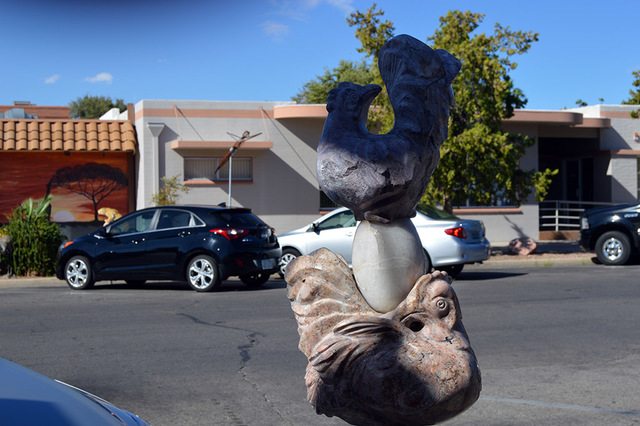 Max Lancaster/Boulder City Review The statue titled “Which Came First?” is one of the three pieces of art owned by the city that were damaged over the past two weeks. The statue was eventually repaired by Vern Burk of Boulder City Public Art Scape. 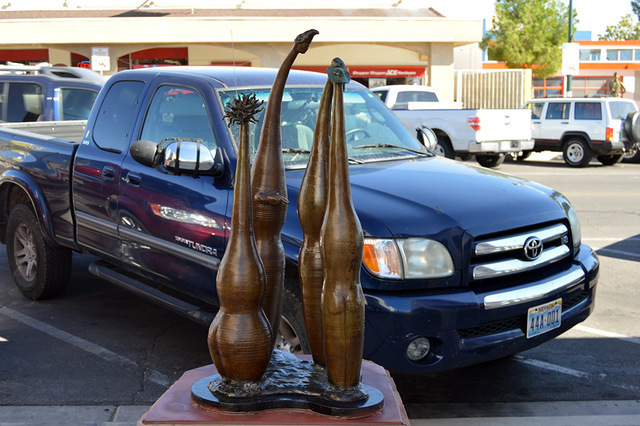 Max Lancaster/Boulder City Review “Discussion Group” is one of the city statues that was recently damaged.

Three art statues on prominent Boulder City streets have been damaged in the past two weeks, leading some to ask how the city plans to pay for the repair of artwork for which it is financially responsible.

On Saturday, the owl statue titled “Monumental Professor” on Nevada Way near the World Famous Coffee Cup was damaged after a driver participating in the Fall Classic Custom and Rod Car Show at Wilbur Square Park crashed into it. The statue is being inspected by the Boulder City Public Works Department.

Two other statues also were damaged recently. The chicken and egg statue titled “Which Came First?” on Arizona Street near Evan’s Old Town Grille was knocked over and broken, and the statue “Discussion Group” by Tony’s Pizza on Nevada Way was damaged.

The city is responsible for the repair of the statues since they own the pieces that were donated by the soon-to-be-defunct nonprofit Boulder City Public Art Scape. The organization has donated more than 30 pieces of art to the city.

Public Art Scape Director Darlene Burk said that her husband, Vern Burk, and their son-in-law personally repaired the “Which Came First?” statue, but the public works department did offer to make repairs.

“The public works department said that they would fix the statue but that we might not like the way they do it because they are not artists,” Darlene Burk said. “We decided to repair the statue ourselves because it was my impression that there was no financial incentive for the city to fix the statue.”

The statue was found knocked over with a noticeable crack in the top part of it.

Since the damaged artwork is owned by the city, it is covered under the city’s general insurance; Boulder City Public Works Director Scott Hansen said, however, that it was in the taxpayers’ best interest not to get insurance involved.

“The artwork is covered by our insurance, but the deductible would be too high for us to justify using it on the statues,” Hansen said. “We have a capable staff here, so why not save money and fix the statue ourselves if we can do that?”

Hansen said that since the city is insured for millions of dollars the deductible for using it would be in the $20,000 range, a price he feels is too much to use on the damaged artwork.

The “Monumental Professor” statue will be paid for by insurance but not through the city’s provider.

“The owl statue was damaged by someone’s car, so we are currently getting the police report on the incident, and we fully expect the car owner’s insurance to cover the damage to the owl statue,” Hansen said.

The city was unable to say how damaged the statue was, but it was knocked down by the vehicle that hit it.

Hansen said that when people in the community volunteer to fix damaged artwork like the Burks did, the whole town is better for it.

“We care about the artwork in this town, and we are more than willing to repair it,” Hansen said. “But if there are people like the Burks who know about art and are willing to fix the problem, then we are more than happy to let them make the repairs.”