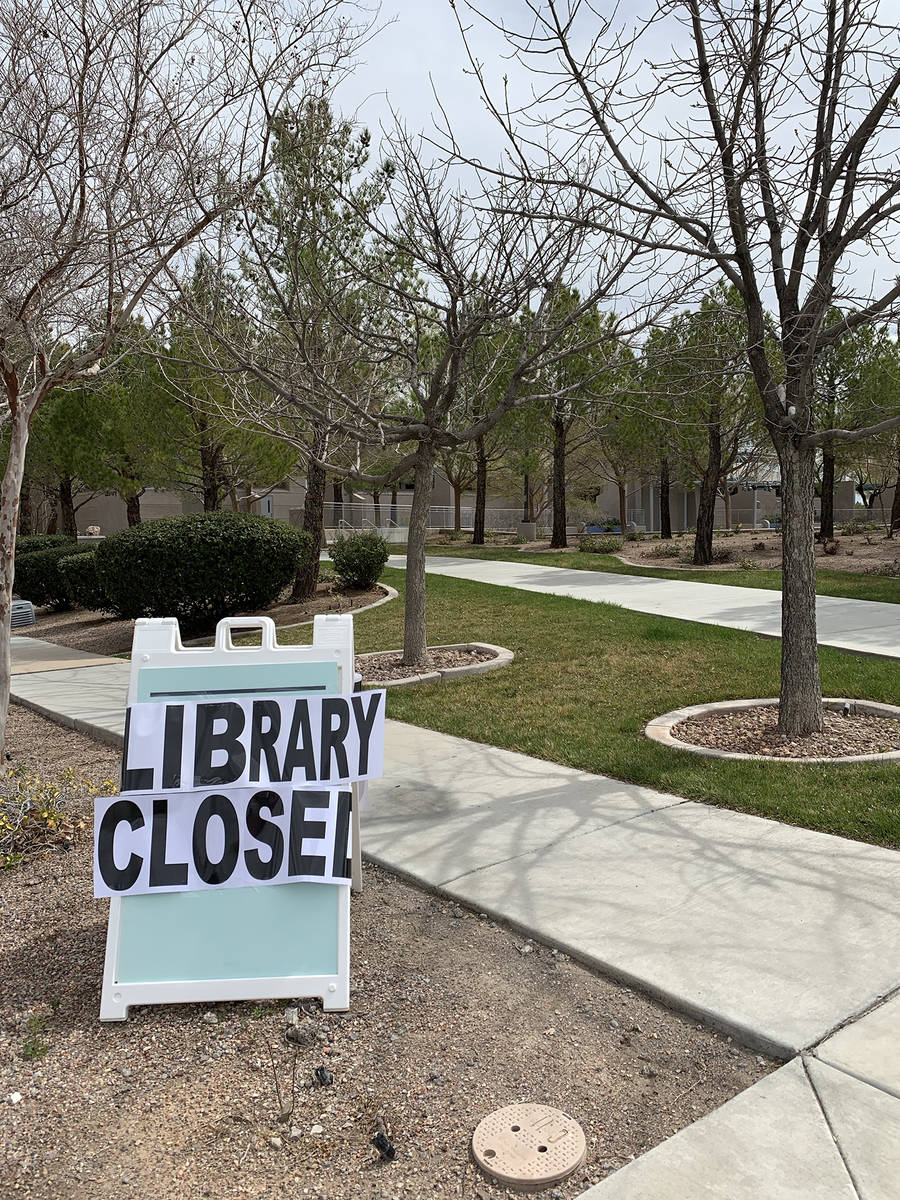 In response to the global COVID-19 pandemic, the Boulder City Library, as seen March 16, has closed to the public. It offers a variety of online book, movie and music options.

As the nation copes with COVID-19, area businesses have taken action to comply with Gov. Steve Sisolak’s order for nonessential businesses and services to close.

Nonessential businesses and services such as beauty shops, barber shops, nail, tanning and waxing salons have been closed since March 17.

Essential services, such as police, fire and transit departments, health care providers and those that provide food, shelter or social services for disadvantaged people may remain open. Additionally, essential businesses such as pharmacies, grocery stores, drug and convenience stores, banks and financial institutions, hardware stores and gas stations are open.

The governor’s order also asked people to maintain a 6-foot space between them and to avoid gatherings in public spaces. This resulted in the closure of fitness centers, auditoriums and theaters, along with the cancellation of special events and athletic competitions.

To help people comply with the order, we have compiled a list of what is open and closed in Boulder City. Because businesses are continually adapting their hours and services as demand warrants, it is a good idea to call before visiting.

The justice and municipal courts are open but in a limited way. All eviction and foreclosure matters in the justice court, with the exception of emergency issues, have been suspended until the governor’s emergency directive is rescinded or by further order of the court. Documents for the courts can still be filed, but Judge Victor Miller is encouraging people to submit them online rather than coming into the courthouse.

Hearings over the telephone in the municipal court can be scheduled if the person feels sick or has been exposed to the virus.

“We are attempting to resolve as much as we can via phone and email to promote social distancing,” Miller said.

The courts’ marshals will be looking for people who seem sick. They will also require those who come into the court to use hand sanitizer.

The hospital is open and has two isolation rooms in case people come in with a suspected case of COVID-19. One is in the emergency room and the other is in the medical/surgical unit of the facility.

The library closed March 16 and staff is encouraging patrons to take advantage of its online resources. During the temporary closure, it asks that items that were checked out not be returned. No fines will be assessed.

It has also established an e-library card that provides access to all of its online resources. It will be valid until June 30. To apply, visit http://bclibrary.org/elibrarycard.

City Hall and other municipal buildings are closed to public access until the governor’s emergency directive is rescinded. According to the city, its employees are considered “vital” and must continue to report to work.

City Council met Tuesday. There is no timeline or plan for the return of all other committee and commission meetings.

Nonemergency business can be handled by email or phone. City Hall can be reached at 702-293-9329 during regular business hours and limited hours on Fridays and Saturdays.

Additionally, all Department of Motor Vehicles services at the police department have been suspended until further notice as well as civilian fingerprinting services.

The airport is open, but the public is not allowed in the staff office areas. Self-serve aviation gas is available 24/7. Full-service jet fuel and aviation gas are available from 8 a.m. to 5 p.m. Monday-Friday. Both are also available on call 24/7.

All four public schools in Boulder City will be closed through for the remainder of the academic year. Online lessons and educational materials are available.

A food distribution site for students in the Clark County School District is at Mitchell Elementary School, 900 Avenue B. It is open from 7-10 a.m. Monday through Friday.

Boulder City’s Tiny Tots and Safe Key programs are closed through that date as well.

The 99 Cents Only store, 800 Buchanan Blvd., and Albertsons, 1008 Nevada Way, are open seven days a week from 8 a.m. to 8 p.m. Both stores also open early at 7 a.m. Tuesdays and Thursdays for seniors and those with compromised immune systems.

Large events at municipal parks have been canceled until the governor’s emergency directive regarding public gatherings is rescinded. The playgrounds at all city parks have been shut down as well as the tennis courts at Hemenway Valley and Broadbent parks, basketball courts at Lakeview, Hemenway Valley, Oasis and Veterans’ Memorial parks, and the beach volleyball courts at Veterans’ Memorial Park. Park bathrooms will remain open from 5 a.m. to 10 p.m.

The fishing pond at Veterans’ Memorial Park is open.

Lake Mead National Recreation Area has closed all facilities in Nevada, including beaches, picnic areas, restrooms, campgrounds, marinas and launch ramps. Vehicles are prohibited, except in the parking lots at the trailhead to the Historic Railroad Trail and Alan Bible Visitor Center. Pedestrians and bicyclists are allowed for day-use only. All trails except Goldstrike Canyon are open.

Additionally, many of the park’s facilities in Arizona are closed. Check the website at https://www.nps.gov/lake/planyourvisit/temporary-operational-adjustments.htm before you visit.

Hoover Dam has temporarily suspended all tours and closed the dam to visitors.

Restaurants that only offer dine-in seating are closed, as are all eat-in dining rooms. Restaurants that offer take-out, drive-thru or delivery service are open, though many have reduced their operating hours to accommodate customer needs.

It closed to the public March 17, but is providing home-delivered meals to the seniors who usually dine at the facility. It also delivers food to homebound seniors through the Meals on Wheels program.

In addition, it is offering care packages of nonperishable foods and cleaning products as needed and upon request.