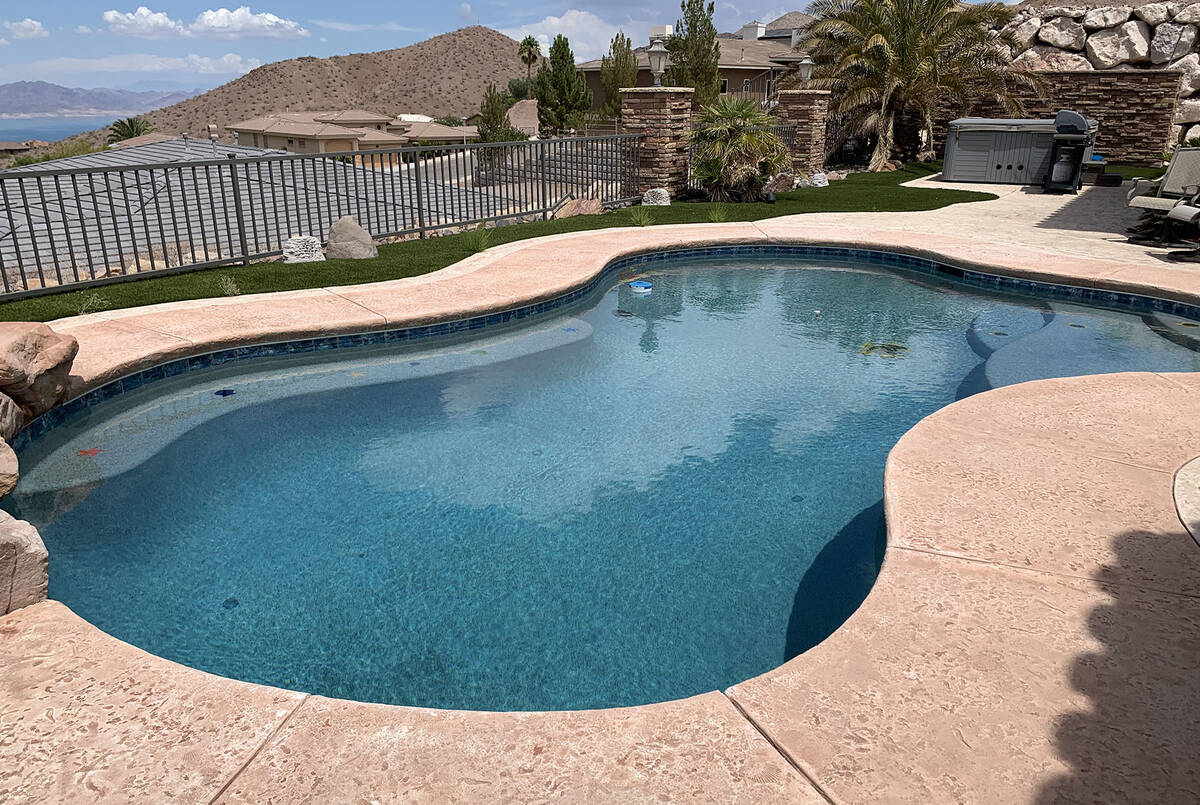 (Hali Bernstein Saylor/Boulder City Review) Boulder City officials will consider changing municipal code to limit the size of residential swimming pools in August after the Southern Nevada Water Authority Board of Directors voted 7-0 to cap the square footage at 600 or less for new pools earlier this month.

The Southern Nevada Water Authority Board of Directors voted 7-0 July 21 to support size limits under 600 square feet for new pool construction. Boulder City Council member James Howard Adams, a member of the SNWA board of directors, voted in favor of the water restrictions.

This SNWA resolution does not have an enforcement component, meaning that the cities of Las Vegas, Henderson and Boulder City have to approve this to put it into effect.

“The resolution is just reaffirming that the agencies making up the Southern Nevada Water Authority support this initiative,” said Bronson Mack, a water authority spokesperson.

Boulder City will discuss changing its city codes to enforce the restriction in August. Henderson and Las Vegas will discuss the matter in September.

“The proposed changes in the Boulder City water conservation plan include limiting pool sizes to 600 square feet, effective Jan. 1, 2023. The SNWA board approved the new limits on Thursday, July 21, 2022, and has asked the member agencies to adopt consistent codes to bring the per capita consumption down to the desired goal of 86 gallons per day. This item will be presented at the Aug. 9, 2022, City Council meeting,” said Boulder City Utilities Director Joe Stubitz.

The size limit is expected to save 3.2 million gallons of water every year and is part of a “mosaic” approach to reducing water consumption in the Las Vegas Valley.

Seventy-five percent of pools installed in the past five years were already 600 square feet or less. The average pool size in Southern Nevada is about 475 square feet.

“This really only affects the top 25 percent of swimming pools being constructed each year,” said Mack.

The changes would only affect new pool and spa construction as pre-existing residential pools exceeding 600 square feet would be exempted.

Dale Devitt, a professor at UNLV and director of the Center for Urban Water Conservation, said the proposed changes don’t surprise him.

“It was just a matter of time before they were going to hone in on swimming pools.”

He said that pools without covers have extremely high rates of water loss, even greater than areas covered by turf grass. That’s because without any vegetation, he explains, there’s nothing to keep the water from evaporating.

For example, a 3,000-square-foot pool evaporates over 145,000 gallons of water annually, which is more water than a typical single-family home uses in a year.

Colby Pellegrino, deputy general director of resources for the Southern Nevada Water Authority, said in a presentation to the Boulder City City Council on July 12 that the organization has seen pools as large as 5,000 square feet going into luxury properties around the valley.

“That’s really a luxury that the community cannot afford,” she said.

Amanda Moss, senior director of government affairs for the Southern Nevada Home Builders Association, said in a statement that even though the policy will negatively impact the association’s members, the regulations are “the right thing to do for conservation and for the economic health of our valley.”

Pool builders have proposed alternatives, like allowing pool sizes to increase based on lot size up to a cap. Beyond that limit, owners would have to pay a conservation fee per square foot that would be used to promote water conservation measures. And pool owners could be given exemptions to the size limit if they install an automatic pool cover, which greatly reduces water evaporation.

An anonymous pool builder claims these solutions could save 29 percent more water than the 600-square-foot limit. “Everyone wants to save water,” he said. “We understand that we have to give. We want to be part of the solution.”

Mack, though, said that implementing a standardized size limit to pools in every residential lot would create equity across properties. “Even if you have a really small lot or a very large lot size, the rules for your swimming pool would be the same across the board,” Mack says, which would help avoid water inequities based on lot size.

Ultimately, the pool builder feels his concerns and suggestions have not been taken seriously. The SNWA has held three meetings since March 15 to discuss the pool size limits with stakeholders, but the builder felt those meetings were unproductive.

Implementing the proposed pool development standards would reduce water usage by only 0.1 gallons per capita per day, making it the least impactful water-saving measure outlined in the SNWA’s 2021 Water Resource Plan.

The builder said the regulation would have negative repercussions for his business. “We’re just a small company. … We’ve put a lot of time and effort into what we feel is a better solution. It’s our livelihood on the line, and (the livelihoods) of our employees and subcontractors.”

Pellegrino acknowledged the proposed pool size limit was unpopular among many, but noted, “That’s where we’re at in our water conservation journey. There is no easy button left.”

Colton Poore is a 2022 Mass Media reporting fellow through the American Association for the Advancement of Science. Email him at Cpoore@reviewjournal.com or follow him on Twitter @coltonlpoore.