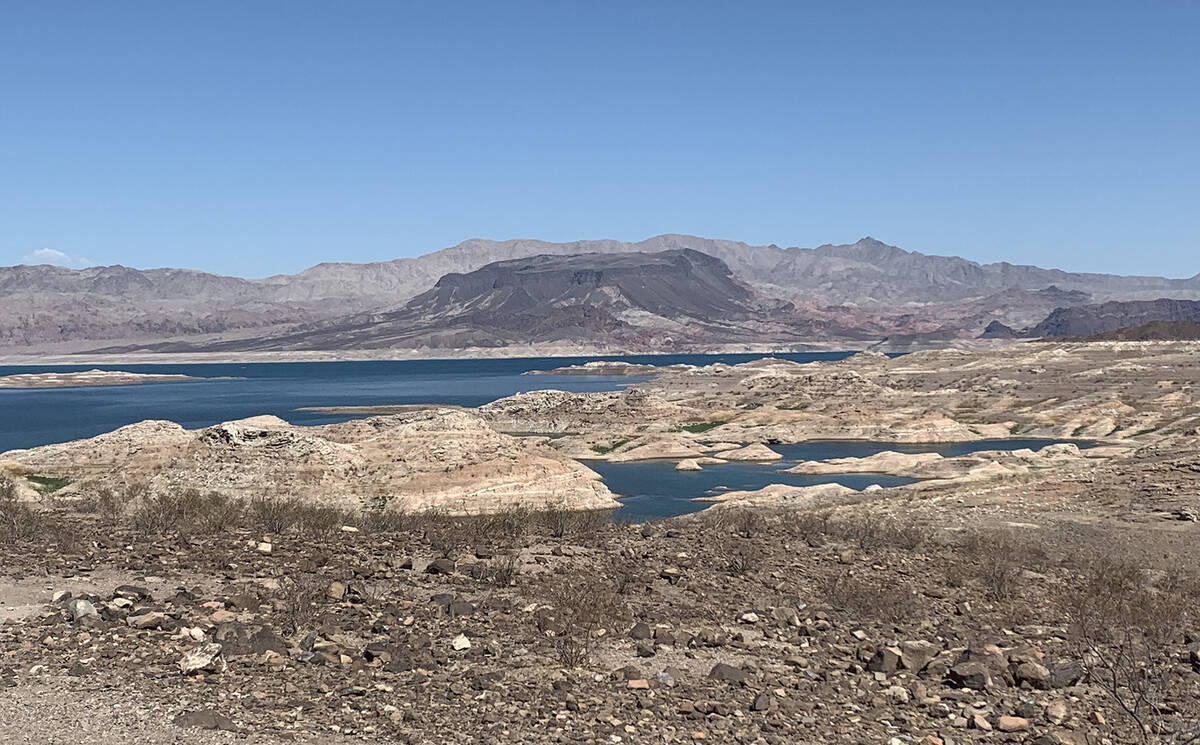 (Boulder City Review file photo) As the water level at Lake Mead, as seen July 9, continues to drop at an alarming rate, officials are working on plans to cut usage from the Colorado River.

Nearly six months have passed since Bureau of Reclamation Commissioner Camille Touton first asked the Western states to come up with a plan to cut back on water use from the river next year by as much as 30 percent, but a cohesive proposal from the seven states that pull from the Colorado that supplies water to some 40 million people has yet to emerge.

Things have only gotten worse along the river since Touton’s request, and that decline shows no signs of slowing down. Reclamation officials said during public meetings in recent weeks that without any adjustments to current operations on the river, Lake Powell could drop to a point where Glen Canyon Dam would not be able to generate hydropower as early as the middle of next year while Lake Mead could drop another 100 feet — putting Hoover Dam’s power generation capabilities in jeopardy — by spring of 2025.

“The risks we saw then have only further materialized given the projected and plausible hydrology,” Touton said during a Dec. 2 meeting to discuss the options the federal government is looking at in lieu of a deal between the states.

Water managers from across the Colorado River basin are in Las Vegas for the annual Colorado River Water Users Association conference, which began Wednesday and continues through Friday, and officials from Colorado River basin states are expected to meet again in an attempt to hash out some kind of agreement to satisfy Touton’s call to cut between 2 and 4 million acre-feet of water use along the river starting next year.

During last year’s water users’ conference, Nevada, California, Arizona and the federal government announced a $200 million plan to buoy Lake Mead’s elevation by about 16 feet over two years. Whether or not any sort of announcement will be made at this year’s gathering is still unknown.

Only piecemeal proposals have been made public thus far, including a proposal from California water agencies to conserve up to 400,000 acre-feet of water annually, or about 9 percent of the state’s annual allocation from the river, in exchange for the federal government making a commitment to contribute to Salton Sea stabilization efforts.

The Southern Nevada Water Authority and nearly 30 other municipalities have signed a memorandum of understanding committing to drastically reducing the amount of thirsty decorative turf that lines their respective cities, an idea that took root in the Las Vegas Valley last year.

With no agreement between the states in place, the Bureau of Reclamation has started the process of revising the current management guidelines for the Colorado River’s two main storage reservoirs, Lake Mead and Lake Powell.

Touton said that the agency still believes the best solution is one struck between the states to lower water use from the Colorado River. But the federal government is moving forward with developing plans to take unilateral action if needed because of the current worrisome low lake levels, but also the likelihood that the drought that has gripped the system for more than two decades will continue to worsen.

A deal would need to come together quickly, however. Katrina Grantz, assistant regional director for the Upper Colorado River Region, said that the states would need to submit a plan by the end of January in order for the bureau to include the proposal in their analysis.

Reclamation officials have laid out what a low-flow scenario would look like if there were no adjustments to curtail water use or shift operations at the two reservoirs.

Under that scenario, Lake Powell’s level would fall to the point where Glen Canyon Dam would no longer be able to generate hydropower by the middle of 2023 and would stay below that level through 2026. Meanwhile, Lake Mead’s surface would drop nearly another 100 feet and fall below 950 feet elevation, the last point in which Hoover Dam can generate electricity, as early as April of 2025.

If Reclamation were to hold back water in Lake Powell in order to protect its hydropower generation capabilities rather than releasing it downstream, Lake Mead would fall even further and more quickly, with Hoover Dam losing its ability to generate power by 2024 and Lake Mead hitting its “dead pool” point of 895 feet in elevation or the point where water could no longer pass downstream through the dam in 2025.

“These conditions pose unacceptable risks to the operations of Glen Canyon and Hoover dams. And so a modified operating guideline needed to be developed,” said Genevieve Johnson, who is overseeing the supplemental environmental impact study process that the agency started in late October.

Dan Bunk, chief of the Bureau of Reclamation’s Boulder Canyon Operations Office, noted that the Colorado River’s flows during the past 23 years are the lowest the system has seen in the past 120 years, and one of the lowest flow periods in more than 1,200 years.

In the past five years alone, just one year saw above-average flows in the river system. The other four years ranged from 37 to 63 percent of average flows, which he said made it one of the driest five-year periods on record.

There’s not much hope for help from Mother Nature on the horizon, either. The coming winter is forecast to be another La Niña winter, with the National Weather Service predicting continued drought and low-flow conditions for the Colorado River system, Bunk said.

Reclamation is looking at possible scenarios where it would set specific elevations at the two reservoirs that it would protect, such as 3,500 feet at Lake Powell and 1,000 feet at Lake Mead, in order to maintain power generation. Doing that would require the bureau to mandate reductions by as much as 2 million acre-feet of water or more and adjusting downstream releases from the reservoir.

The bureau said it expects to have a draft of the impact study available for the public to review by next spring, and the final version published by late summer 2023.