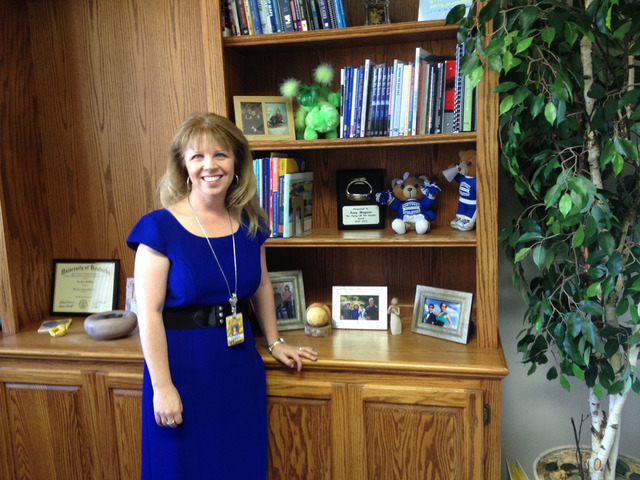 Coming from a small, Southern farm town, Amy Wagner felt right at home when she was tabbed as the new principal of Boulder City High School.

Wagner hails from Philadelphia. Not the Philadelphia where Sylvester Stallone made his iconic runs up the stairs before fighting as Rocky Balboa, but the rural town of Philadelphia, Miss., population 7,483, according to the U.S. Census Bureau.

Growing up, there were two high schools in Wagner’s community, and it took an hour on the bus just to get to school. Her uncle, who drove the school bus, also taught math at her high school.

“It was a great way to grow up,” Wagner said. “The South is great. There are a lot of traditions. Very similar to Boulder City.”

Wagner pursued an education degree at the University of Kentucky, where she credited men’s basketball coach Rick Pitino for transforming the dynamic between basketball and the student population. Getting the students more involved with athletics was something Pitino was instrumental in, and it’s a relationship that Wagner plans to foster at Boulder City High.

“Rupp Arena was always huge, but he added the student component,” she said. “I remember standing in line on Sunday mornings for hours to get tickets. We’d get there at like 3 a.m.”

Upon obtaining her degree in 1993, Wagner taught in schools in Texas and California before coming to Las Vegas in 1997. Despite the long hours and pessimism from the dean of the graduate college at UNLV, Wagner completed her master’s in education in just one year, as she said she would, and finished with a perfect 4.0 GPA.

She then worked her way up the Clark County School District ladder, first as a seventh-grade science teacher, then as a dean, and eventually an assistant principal where she held the job at Boulder City High from 2011 until she was named principal two weeks ago.

“In her time with the district, she has created unique opportunities and experiences for students,” said Eva White, assistant chief student achievement officer for the school district. “She has done a great job of building relationships at Boulder City High School, and there is no doubt that she is committed to continue working hard for the school and the community.”

Although Wagner grew up in the South, she spent 13 years in Las Vegas before coming to Boulder City in 2011. Despite living in the big city, Wagner relished the thought of returning to a small town.

“It was like going back home. I enjoy the familylike atmosphere of Boulder City,” she said. “I know all of the students. I know their families. I know their brothers and sisters when they go through. That’s the awesome part about Boulder City. I think it’s the best kept secret in Clark County.”

Boulder City High has had a long resume of success in both academics and athletics, and Wagner said she doesn’t plan to alter that tradition as the new boss.

“I don’t want to change anything. I want to enhance some things,” she said. “Obviously, Kent (Roberts) and I were a lot alike in our philosophy with education, but I think we’re different in how we go about that.”

During Roberts’ first year as principal, the high school saw an 11 percent increase from the previous year in students who passed their Advanced Placement exams, in large part because of the convenience of iPads.

The next year, that number increased another 11 percent to 64 percent overall, according to the Nevada Education Department.

Wagner embraced the idea of using iPads to teach students. The only problem is helping teachers and parents adapt to the ways of the younger generation, she said.

Wagner said she understands the dynamic of a small town, and how the community directly affects success in the classroom. She was raised around it, and it’s not something she plans to shy away from. Even with the school’s 88 percent graduation rate and five-star status within district, Wagner said there’s always room for improvement.

“We still work hard and we don’t quit,” she said. “Yes, our graduation rate is high, but I want it to be higher. We’ll keep on pushing and reach for the next level.”

Wagner can be found pacing the sidelines at football games, biting her nails during a gut-wrenching basketball game, or listening to the Student Council’s ideas, among several other school activities.

Wagner is married with two kids, and said she wants nothing but success for her students. Her daughter serves as a Navy sonar tech, and her son is a freshman at the East Career & Technical Academy in Las Vegas.

“I have the same goals for our students here in Boulder City that I do for my kids. I want the very best for them,” she said.

Despite Boulder City being 1,500 miles and cultural light years away from Philadelphia, Miss., Wagner credits her hometown with her success, and the vision she has as a new principal.

“You had to rely on each other,” she said about her upbringing. “People just kinda watched everybody’s kids, and that’s how I grew up. It’s that village, it’s that community that makes Boulder City so wonderful.”